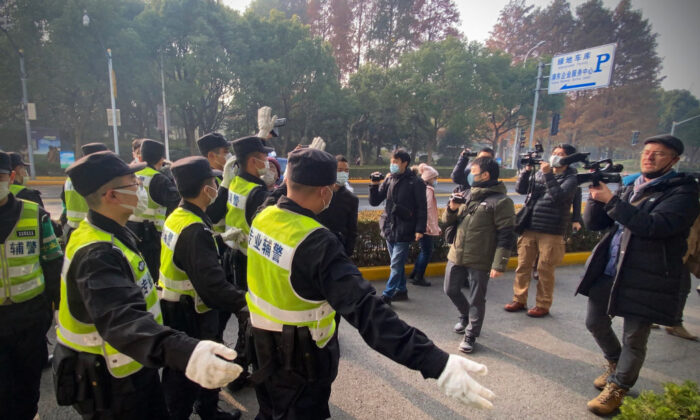 Zhang, a 37-year-old former lawyer, began reporting on the ground in Wuhan, the epicenter of China’s pandemic, in early February. She suddenly disappeared in May. A month later, Chinese authorities announced that she had been arrested. On Dec. 28, Zhang was sentenced to four-year imprisonment after being convicted of “picking quarrels and provoking trouble,” one of the common charges the Chinese Communist Party (CCP) uses to imprison dissidents.

Ren Quanniu, one of Zhang’s defense lawyers, said that his client’s trial was not an open one, as it was not broadcasted online. In an interview with the Chinese-language Epoch Times, Ren said that the only people attending the court hearing were Zhang’s parents and two Chinese community-level officials tasked to monitor them.

Ren said that his client was handcuffed to her wheelchair the whole time, and she was not in good health. Before her Monday trial, Zhang went on a hunger strike for months to protest her charges. Prison officials force-fed her—treatment that Amnesty International considered torture.

She became so weak that she needed a wheelchair to move around.

Ren recalled that the presiding judge on Monday prevented Zhang from speaking on several occasions.

The trial was also carried out hastily, Ren added, noting that the local prosecutor’s office failed to present sufficient evidence and materials during the trial. Additionally, some of Zhang’s recorded statements were not presented.

Zhang’s indictment, which became publicly available in November, accused her of “maliciously speculating” about Wuhan’s pandemic by “speaking to overseas media Radio Free Asia and The Epoch Times.” The court document named several witnesses, whom prosecutors alleged could testify that Zhang did not present the true situation in Wuhan.

Zhang spoke to the Chinese-language Epoch Times on several occasions. In a March interview, she disputed the Chinese regime’s claim that the virus that causes COVID-19 originated from the United States.

In a video uploaded to YouTube in early March, Zhang criticized Beijing’s lockdown measures, saying that the policies were “inhumane” and violated citizens’ basic rights to live.

According to Ren, Zhang’s mother cried out loudly after hearing her daughter’s sentence on Monday.

In a subsequent interview with Radio Free Asia (RFA), Zhang’s mother explained that she was pressured into cooperating with the local state security bureau. She did not speak to foreign media in the previous months.

Now, after seeing her daughter get a heavy sentence, Zhang’s mother said she was duped into believing Chinese officials.

“They did not just hand down a sentence. They want to kill Zhang Zhan. They know very clearly about her health condition,” Zhang’s mother told RFA.

Based on how quickly court proceedings concluded, Ren said he believed Beijing wanted to make an example of Zhang’s sentencing.

“It could have a deterrent effect, serving as a threat to the general public—in particular to those who like to comment on major public events,” Ren said.

The courthouse was under heavy security on Monday as uniformed and plainclothes police officers dispersed foreign journalists and people coming to support Zhang.

He Jiawei, a rights activist from southern China’s Hunan Province, told the Chinese-language Epoch Times that before he reached the courthouse, he was taken by police officers to a nearby police station on Monday morning.

Speaking from the police station, He said he was among more than 10 people detained there, including a Reuters reporter from Singapore and a Japanese journalist.

“Zhang Zhan was jailed for trying to reveal what we all know is true. COVID-19 began in Wuhan and the #CCP’s lies & deception led to a global pandemic,” stated Rep. Ron Wright (R-Texas).

The United Nations Human Rights Council also said via Twitter that it was “deeply concerned” about Zhang’s sentence.

“We raised her case with the authorities throughout 2020 as an example of the excessive clampdown on freedom of expression linked to #COVID19 & continue to call for her release,” the U.N. body stated.

China’s U.N. Mission defended Zhang’s sentence in a tweet, saying that “everyone is equal before the law.”

Sophie Richardson, the China director at the Human Rights Watch, rebuked China’s assertion and tweeted that “It has everything to do with your government’s determination to silence critics—in violation of #China and intl #humanrights law.”

New York-based NGO Coalition for Women in Journalism said in a statement that it was “utterly dismayed with the court’s decision.”

“It is yet another, worrying manifestation of the suffocating environment for press freedom in China. No journalist should be subjected to vicious, legal persecution, especially when informing the public about a deadly epidemic spreading across the country,” the coalition stated.

Barbara Trionfi, executive director of the Vienna-based International Press Institute, said in a statement that Zhang’s sentence violated “people’s right to receive information from different sources about an issue that is greatly affecting their lives.”

Trionfi added: “As the world is struggling to assess the origins, dissemination patterns, and consequences of the COVID-19 virus, China is shirking its responsibilities and obligations by punishing those journalists who have contributed to disseminating valuable information.”

The whereabouts of two other Chinese citizen journalists who traveled to Wuhan—Chen Qiushi and Fang Bin—are still unknown. They went missing earlier this year.

A third citizen journalist, Li Zehua, went missing, then resurfaced briefly in April. He said police had forcibly quarantined him.