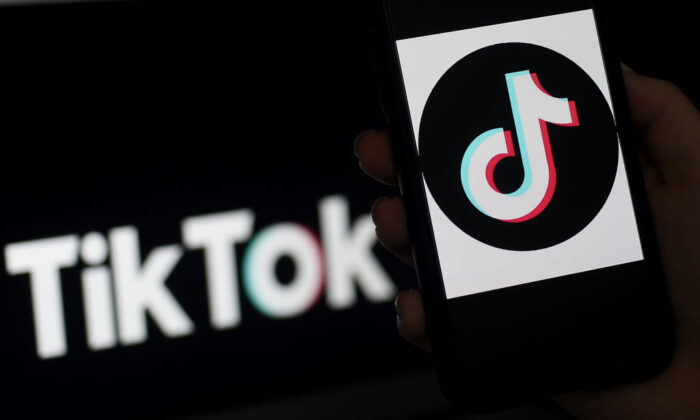 TikTok logo is displayed on the screen of an iPhone in Arlington, Virginia, on April 13, 2020. (Olivier Douliery/AFP via Getty Images)
China-US News

The lawmaker explained in a press release on April 21 that many people, including celebrities and teens, are turning to TikTok as they are stuck at home due to social distancing rules for preventing the spread of the CCP (Chinese Communist Party) virus, commonly known as the novel coronavirus.

“Some phone apps are fun and useful, others are counterintelligence threats. Americans should know which is which before they hit the download button,” Banks said.

He added: “Parents and consumers have a right to a warning that by downloading some apps like Russia’s FaceApp or China’s TikTok, their data may be used against the United States by an adversarial or enemy regime.”

Countries that are considered a threat to U.S. national security include China, Iran, North Korea, Russia, Sudan, Syria, and Venezuela, according to the press release.

Banks pointed out that China’s national intelligence law, which went into effect in 2017, allows Beijing access to all data stored within its national borders, including “data harvested from TikTok hosted on Chinese servers.”

The proposed bill (H.R.6570) would require software marketplace operators and developers of specific foreign apps to provide consumers a warning prior to their download.

The warning will read: ‘‘Warning: [Name of Covered Foreign Software] is developed by [Name of Developer of Covered Foreign Software], which [is controlled by a company that] [is organized under the laws of]/[conducts its principal operations in]/[is organized under the laws of and conducts its principal operations in] [Name of Covered Country]. Please acknowledge by selecting the “accept” or “decline” button below if you wish to proceed,” according to the press release.

To make the warning stand out, it will be separate from any other embedded terms and conditions and have its own acknowledgment notification.

TikTok, known as “Douyin” in China, was launched by Chinese tech company ByteDance in 2016.

In February 2019, TikTok agreed to pay a $5.7 million fine to settle U.S. government charges that it illegally collected personal information from underage users.

In a letter to Treasury Secretary Steven Mnuchin last year, U.S. Sen. Marco Rubio (R-Fla.) warned that China was using apps like TikTok to “advance their foreign policy and globally suppress freedom of speech, expression, and other freedoms that we as Americans so deeply cherish.”

In January, the U.S. military banned its soldiers from using the Chinese video-sharing app on government-issued phones due to cybersecurity threats.

There have been other legislation aimed at addressing TikTok’s threats.

Senators Josh Hawley (R-Mo.) and Rick Scott (R-Fla.) introduced the “No TikTok on Government Devices Act” (S.3455) in March, which would ban federal employees from using TikTok on their government-issued phones.

“TikTok is owned by a Chinese company that includes Chinese Communist Party members on its board, and it is required by law to share user data with Beijing,” said Hawley according to a press release about his bill.