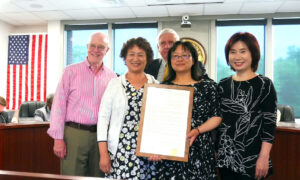 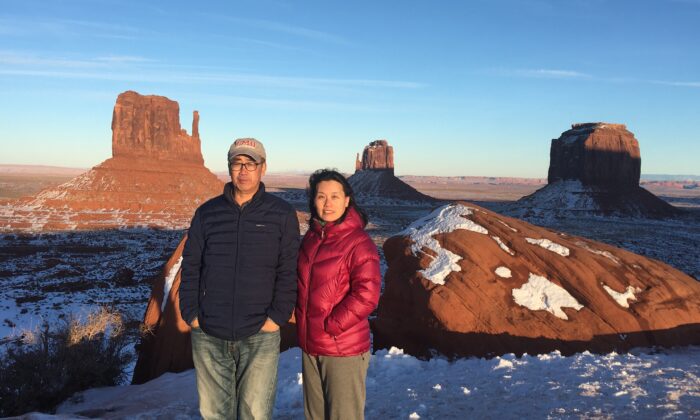 Zhou Deyong and You Ling in Monument Valley in Navajo County, Ariz., in January 2020. (Courtesy of Zhou You)
China Human Rights

Zhou Deyong last saw his wife and son in Florida half a year ago, before flying back to China to care for his ailing parents, aged 87 and 90.

He’s now being held in a Chinese detention center with little access to the outside world.

His wife and son both practice Falun Gong, a spiritual practice that has been targeted for brutal suppression by the communist party in China for more than two decades.

Zhou, a senior geological engineer at the Geological Scientific Research Institute of the Shengli Oil Field, the second-largest crude producer in China, was arrested on April 23 at his home in Dongying, a coastal city in eastern Shandong Province. They accused Zhou of “utilizing heretical religion to sabotage the enforcement of law”—a common charge that many religious believers have faced under a regime that has shown little tolerance of faith.

The police produced no official document when they raided Zhou’s house and seized more than 100 Falun Gong-related books and booklets—items his family had left behind when they fled to the United States. According to FalunDafa.org, the self-improvement discipline promotes the values of truthfulness, compassion, and forbearance.

Something felt off to Zhou’s family when calls to his phone went unanswered for days. They finally learned of his arrest after reading an article on Minghui—a U.S.-based website dedicated to documenting the persecution of Falun Gong practitioners in China—that also noted the arrests of 18 practitioners from the region.

Under Chinese criminal law, one could face three to seven years of jail time for making and spreading 250 books and publications that the regime deems to be “heretical propaganda.” For one-fifth of that quantity, the sentencing could be up to three years.

‘A Stone Dropped Into the Vast Sea’

Authorities were tight-lipped on any information pertaining to the detainees. Many calls from Zhou’s wife, You Ling, to local police stations and detention centers in China never got through. And the few times that she was able to speak with someone, the officials tended to dodge her questions or even played communist “red songs,” she said.

“It was like a stone dropped into the vast sea. They completely ignore you,” Zhou You, the couple’s son, told The Epoch Times.

“We can only guess why my father was arrested in the first place. I don’t think my father had any clue himself.”

The authorities initially denied a request for Zhou to meet with his lawyer. On May 25, the day before a scheduled video meeting, police called the lawyer to call off the meeting, citing “weather conditions.”

“Over those few days, there was no extreme weather, and the meeting equipment … it’s just a software they install at the police bureau and a camera, rain and wind should have no impact on them,” Zhou You said. “They are simply finding an excuse to stop us from seeing him.”

On the U.S. side, the family’s plight caught the attention of Rep. Gus Bilirakis (R-Fla.), who wrote a letter to Chinese leader Xi Jinping calling for Zhou’s release.

Bilirakis, who co-chairs the Congressional International Religious Freedom Caucus and is a member of the Tom Lantos Human Rights Commission, spoke highly of the family and says he wants to “do everything in my power to make sure the gentlemen is released.”

“It’s really unforgivable some of the things the Chinese Communist Party has done to these wonderful people,” he told The Epoch Times, referring to the Falun Gong community.

“This just should not happen anymore, and it has.”

A grandson of Greek immigrants, Bilirakis recalled having a family member who had to leave Turkey in the early 1900s during the persecution of Greek Orthodox Christians, a heritage that helped him to identify with the Falun Gong practitioners, he said.

“These are peaceful people,” Bilirakis said, noting that they “should have a right to practice any … spiritual meditation.”

“It’s only a positive thing.”

The U.S. pressure appeared to have an impact on the situation. Half an hour after Zhou You mentioned Bilirakis’s letter in a call to the judicial officials, the detention center called the lawyer and said that the meeting would proceed.

Zhou’s family said they’re concerned about his health after receiving updates from the lawyer. Zhou, who will turn 60 in a few weeks, already looks thinner. He also asked his lawyer to pass along a message to his son: “Stay there [in the United States] and be well.”

The family has carefully kept the news from Zhou’s parents, who both have heart problems and high blood pressure, among other health issues. They told them that Zhou had returned back to the United States for a second visit.

In the two-month period between March 1 and April 30, nearly 2,860 Falun Gong practitioners are known to have experienced police harassment or arrests, according to Minghui.

The local police in Zhou’s hometown of Dongying City conducted a campaign this year to collect the personal details of each Falun Gong practitioner, including their addresses, details about the vehicles they own, and their phone numbers.

The state-controlled Shengli Oil Field—which translates to “victory” from Chinese—is a major economic powerhouse in the region that employs tens of thousands of workers, including Zhou and his wife, You. For years, thousands of Shengli employees have experienced house raids, detention, forced labor, or imprisonment for persisting in their practice of Falun Gong. Dozens of them lost their jobs, and at least 11 people died under the ongoing persecution.

You, who has sought refuge in Florida, recalled spending more than 40 days in a “black jail” operated by the oil field in 2012, where she was fed propaganda materials that maligned her faith on a daily basis.

“Every time we went out to talk to people about the persecution of Falun Gong, we didn’t know if we could come back,” You said.

She said that she has minimized her use of phones for nearly 20 years due to surveillance concerns.

Shi Ning, a former data center engineer at the oil field who has also suffered persecution for her Falun Gong faith and escaped to the United States, told The Epoch Times that she endured a total of nearly eight years of official and unofficial detention throughout a two-decade span.

At one labor camp, at least 100 people took turns day and night persuading her to give up practicing Falun Gong, she said of her ordeal in China. She would hear “horrible cries” as Falun Gong practitioners detained in the same cell got pulled out one by one. When it was her turn, her hands were cuffed behind her back as 11 people rained down blows on her head and waist. Three days later, when she saw herself in front of a mirror, she could hardly recognize the body she saw reflected back.

“My head … was completely swollen,” Shi told The Epoch Times. “My two eyes were almost triangular—you couldn’t see the eyeballs at all.”

She started a hunger strike and was sent to the hospital four times due to failing health. There, a guard hit her head with an iron rod after spotting her doing Falun Gong’s qigong exercises.

She lost around 66 pounds—approximately half of her body weight—over the months of brutal detention.

Those times were marked with confusion and fear, noted Shi, who now resides in New Jersey.

“We were merely trying to be good people. Why would it come to this?” she said of the Chinese authorities.

She cited the death of a friend whom she suspected had been a victim of state-sanctioned forced organ harvesting. Shi said that when the woman’s family went to see her body in the hospital, hours after the police had claimed that she was dead, they saw tears coming out of her eyes when they cried and called her name—indicating she was still alive. The family begged doctors at the hospital to help her, but none would, and by the next day, she was dead. Her husband was also tortured after questioning her cause of death and died under mysterious circumstances two years later.

“There were no reports on this. None,” Shi said. “Who has the guts to report on this in mainland China? … They kept silent in the face of crimes.”

Bilirakis was one of the original sponsors for a House resolution a decade ago that called for an end to the ongoing persecution of Falun Gong.

Now, it’s time to bring another one to Congress’s attention, he said.

“It needs to be brought to the forefront again,” Bilirakis said. “It’s going to be a strongly worded resolution.