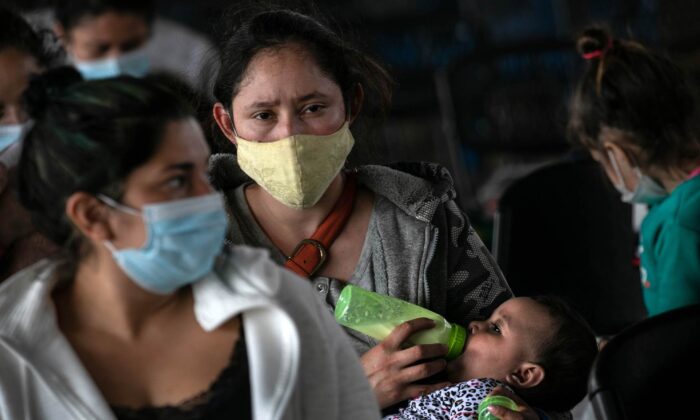 A mother holds her daughter while awaiting COVID-19 test results after being released by U.S. immigration authorities in Brownsville, Texas, on Feb. 25, 2021. (John Moore/Getty Images)
US News

US Lacks Facilities for Spike in Unaccompanied Children at Border: Psaki

“There are more children coming across the border than we have facilities for at this point in time,” Psaki told reporters during a press briefing.

According to multiple reports, the Department of Homeland Security (DHS) has confirmed that the number of migrant children in custody along the southern border is currently more than 3,250—more than triple the number from two weeks ago. Of those children, more than 1,360 have been staying at holding cells longer than the three days allowed by law.

Psaki defended the influx, saying that the Biden administration’s policy of accepting unaccompanied migrants under the age of 18 was first introduced as it continues to prioritize “humanity.”

“That is a policy decision which we made because we felt it was the most humane approach to addressing what are very difficult circumstances in the region, and that means there are more children, kids under the age of 18 of course, coming across the border,” she said.

The administration, she said, is “working on putting in place policies that can address what we’re seeing,” such as increasing the number of Health and Human Services (HHS) facilities for unaccompanied children to be transferred to after being apprehended at the southern border.

It is also working to “safely” increase the number of children that can occupy current facilities in accordance with guidelines from the Centers for Disease Control and Prevention (CDC), she said.

President Joe Biden hasn’t yet acknowledged the crisis or announced any concrete plans to address the growing number of illegal crossings. When asked by a reporter this week whether there’s a crisis at the border, Biden replied, “No, we’ll be able to handle it.”

Adopting a similar tone, Psaki on Tuesday brushed off the need to “put new labels on what we have already conveyed is challenging.”

The DHS meanwhile is seeking volunteers from among its agencies to assist in dealing with an “overwhelming” migrant surge at the border.

DHS Secretary Alejandro Mayorkas in an email to employees on March 8 said that he has activated the Volunteer Force to support Customs and Border Protection (CBP) in providing humanitarian support and non-law enforcement assistance.

Texas Gov. Greg Abbott on Tuesday called the situation at the border a “crisis” and blamed Biden’s immigration policies, saying they invite illegal immigration. He said the crisis “will grow increasingly worse by the day.”

House Republican Leader Kevin McCarthy (R-Calif.) meanwhile said that he will head a delegation to the U.S.-Mexico border to assess the situation, including the dramatic surge in unaccompanied children, Axios first reported.

“I feel compelled to express great concern with the manner in which your administration is approaching this crisis, but with hope that we can work together to solve it,” McCarthy wrote in a letter Friday, requesting to meet with the president.