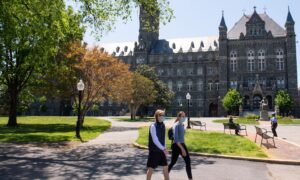 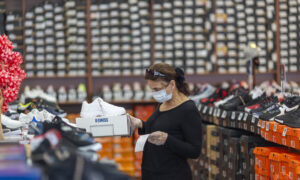 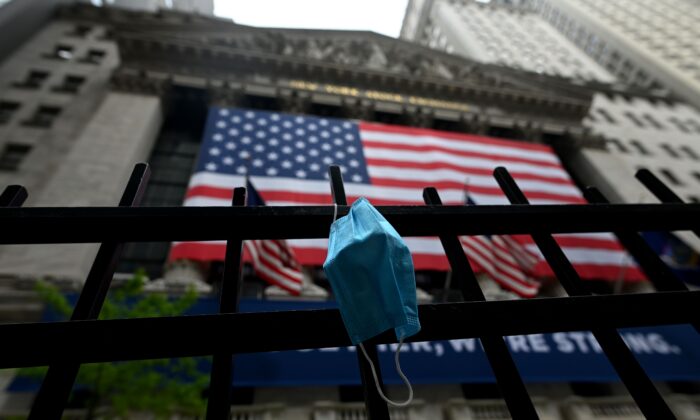 A face mask is seen in front of the New York Stock Exchange (NYSE) at Wall Street in New York City, on May 26, 2020. (Johannes Eisele /AFP/Getty Images)
Economy

WASHINGTON—U.S. private payrolls fell less than expected in May, suggesting layoffs were abating as businesses reopen, though the overall economy’s recovery from the COVID-19 pandemic will be slow.

The ADP National Employment Report on  June 3 showed private employers laid off another 2.76 million workers last month after a record 19.557 million in April. Economists polled by Reuters had forecast private payrolls dropping by 9 million in May.

A staggering 25 million private jobs were lost over the past three months. The ADP report is jointly developed with Moody’s Analytics.

Zandi said there was no evidence yet the government’s Paycheck Protection Program (PPP) was helping the labor market. The PPP, part of a historic fiscal package worth nearly $3 trillion, offers businesses loans that can be partially forgiven if they are used for employee pay.

Stocks on Wall Street opened higher as investors remained optimistic about an economic rebound despite growing social unrest. The dollar slipped against a basket of currencies. U.S. Treasury prices fell.

Though the worst of job losses is probably behind, economists estimate that roughly one in four workers who were laid off or furloughed during the near shutdown of the country in mid-March to control the spread of COVID-19 were unlikely to be rehired. Many bankruptcies are anticipated.

“The ADP report isn’t always a reliable predictor of the government data, but it suggests that the pace of job loss moderated noticeably between April and May, even though it remained substantial relative to pre-COVID-19 norms,” said Daniel Silver, an economist at JPMorgan in New York.

“This is a message broadly consistent with some other related signals, and the labor market likely has benefited from the easing of restrictions on activity in many places.”

According to a Reuters survey of economists, nonfarm payrolls probably declined by 8 million last month after plummeting by a record 20.537 million in April.

The unemployment rate is forecast rocketing to 19.8 percent, a post-World War Two high, from 14.7 percent in April.

Recessions in the United States are called by the National Bureau of Economic Research, which does not define a recession as two consecutive quarters of decline in real gross domestic product, as is the rule of thumb in many countries. Instead, the NBER looks for a drop in economic activity, spread across the economy and lasting more than a few months. Economists believe the economy slipped into recession in March.

The ADP report showed job losses across all sectors in May, though within the service-providing sector, administrative services, which include temporary help, and educational services showed employment gains.