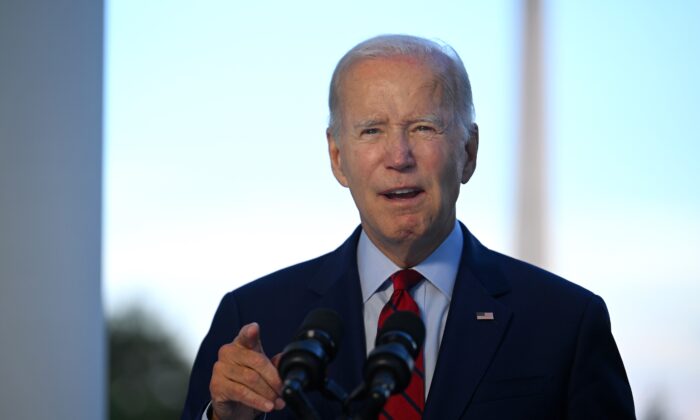 The United States has killed the leader of al-Qaeda, President Joe Biden confirmed on Monday.

“On Saturday, at my direction, the United States successfully concluded an airstrike in Kabul Afghanistan that killed the Emir of al-Qaeda, Ayman al Zawahiri,” Biden said in an address at the White House.

American forces conducted the precision drone strike on Zawahiri in Kabul, Afghanistan, Biden said, after the U.S. intelligence community located the al-Qaeda leader earlier this year. Biden said the strike did not lead to civilian casualties.

The spokesperson for the Taliban, Zabihullah Mujahid, wrote on Twitter on Monday that “an air strike was carried out on a residential house in Sherpur area of Kabul city” the past Sunday. Mujahid said the attack was conducted by American drones.

Zawahiri succeeded Osama bin Laden as the leader in June 2011, when bin Laden was killed by the U.S. military.

The FBI listed Zawahiri as a “most wanted terrorist,” for the murder of U.S. nationals outside the United States (pdf).

Biden called Zawahiri the “number two” at the time of the 911 terrorist attack and “the mastermind” behind attacks against Americans “for decades.”

Zawahiri was also indicted for his alleged role in the Aug. 7, 1998, bombings of the United States Embassies in Dar es Salaam, Tanzania, and Nairobi, Kenya, according to an FBI wanted notice (pdf). Biden said the embassy attack killed 224 people and wounded 4,500 others. Zawahiri is also believed to have plotted the bombing of the USS Cole in 2000 in which 17 U.S. sailors were killed.

A U.N. Security Council report dated 2021 (pdf) said Zawahiri was “ailing” in Afghanistan then and that Sayf-Al Adl was to be Zawahiri’s “most likely successor” who then resided in the Islamic Republic of Iran.

The strike came a year after the Biden administration completed the withdrawal of American troops from Afghanistan.

“When I ended our military mission in Afghanistan almost a year ago, I made the decision that after 20 years of war, the United States no longer needed thousands of boots on the ground in Afghanistan, to protect America from terrorists who seek to do us harm,” Biden said.

‘A Great Deal of Confusion’

Geopolitical analyst and author of “The Shadow War: Iran’s Quest for Supremacy,” commented that despite the fact that the killing of Zawahiri was an “excellent success for the U.S. military,” many unanswered questions still linger around the assassination and whether it is truly a strategic victory for the United States.

One source of “a great deal of confusion,” Weichert said, was the means by which the American intelligence community obtained the whereabouts of Zawahiri, considering that U.S. networks have been “eviscerated since the disastrous US pullout of Afghanistan last year.”

“If this intelligence came from whatever allies remain on the ground, excellent. If it came from a rival faction or a rival individual seeking to replace the aging Zawahiri as leader of al-Qaeda, then U.S. power had been yet again hijacked and misused to further the ends of the jihadist cause,” the analyst noted.

Notwithstanding the longtime cooperation between the Taliban and al-Qaeda, Weichert said, the “alliance has been one of convenience” that may dissolve if Taliban starts to perceive al-Qaeda as an “impediment” to its “total restoration of power.”

“Now that the Taliban are in power again in Afghanistan, it might be that the new Taliban leadership is trying to weaken their onetime allies, al-Qaeda, who they may view as a potential impediment to the Taliban’s total restoration of power.”

“And with Zawahiri gone, the issue will be: who comes after him? We cut off the head of al-Qaeda. As history has shown, however, cutting off the head does not end al-Qaeda. A new head simply rises in its place,” Weichert said. “And with U.S. intelligence access to Afghanistan severely limited since the pullout last year, what might we be in store for next?”

U.S. officials have commended the U.S. military for carrying out the attack and condemned the Taliban for violating the Doha Agreement, the peace agreement signed by the Trump administration and the Taliban in February 2020 to end the 20-year War in Afghanistan.

“By hosting and sheltering the leader of al Qa’ida in Kabul, the Taliban grossly violated the Doha Agreement and repeated assurances to the world that they would not allow Afghan territory to be used by terrorists to threaten the security of other countries,” Secretary of State Antony Blinken said in a press release late Monday.

In exchange for U.S. military withdrawal, among other terms, the Taliban agreed in the Doha Agreement that it would not use its position in Afghanistan to threaten the security of U.S. and U.S. allies, according to U.S. think tank the Council on Foreign Relations.

“They also betrayed the Afghan people and their own stated desire for recognition from and normalization with the international community,” Blinken said.

Sen. Ted Cruz (R-Texas) touted the killing of Zawahiri as “an important accomplishment.”

“All Americans will breathe easier today knowing Ayman al-Zawahiri, the leader of Al-Qaeda, has been eliminated,” Cruz said in a Monday statement. “This strike should be a message to terrorists near and far: if you conspire to kill Americans, we will find and kill you.”

House Majority Leader Steny Hoyer (D-Md.) said the attack is a “critical reminder that the United States retains the ability to conduct operations against terrorist targets in Afghanistan or anywhere in the world.”

“We will never forget how al-Qaeda attacked us on September 11, 2001,” Hoyer wrote on Twitter on Monday.

House Minority Leader Rep. Kevin McCarthy (R-Calif.) commended the American military forces for taking out Zawahiri but demanded clarity from the Biden administration on the “resurgence of al-Qaeda” in Afghanistan following the withdrawal of U.S. troops in the region.

“We owe a debt of gratitude to the brave Americans who took out the terrorist, Al Zawahiri,” McCarthy said in a statement on Twitter late Monday.

“The Biden admin must provide Congress with a briefing as soon as possible to discuss the resurgence of Al Qaeda in the region following his disastrous withdrawal from Afghanistan,” McCarthy said.