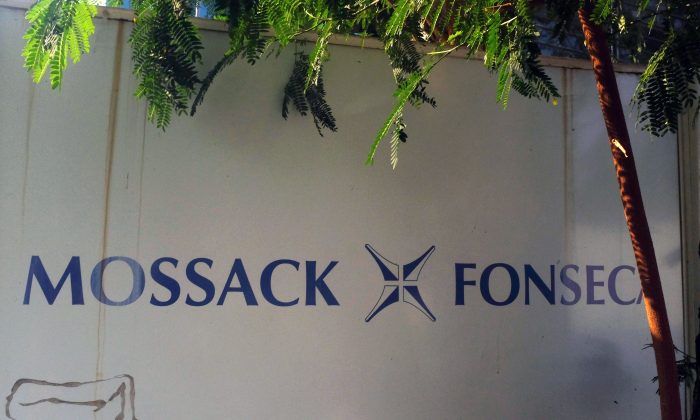 View of a sign outside the building where Panama-based Mossack Fonseca law firm offices are placed in Panama City on April 3, 2016. (Rodrigo Arangua/AFP/Getty Images)
International

The massive data leak from Panama-based law firm Mossack Fonseca on April 3 revealed how the rich and powerful hide their money offshore.

No big names have popped up yet when it comes to the U.S., but the breached data reported 3,072 companies, 441 clients, 221 beneficiaries, and 3467 shareholders related to the U.S.

Peter Carr from the U.S. Justice Department said in a statement, “We are aware of the reports and are reviewing them. While we cannot comment on the specifics of these alleged documents, the U.S. Department of Justice takes very seriously all credible allegations of high level, foreign corruption that might have a link to the United States or the U.S. financial system.”

Other foreign officials also weighed in.

Iceland’s Prime Minister Sigmundur Davíð Gunnlaugsson, was asked about the offshore holdings that the data implicated on him and his wife during an interview with a Swedish broadcaster. Gunnlaugsson walked out of the interview saying, “What are you trying to make up here? This is totally inappropriate,” according to The Guardian.

Since the accusations, opposition members of parliament have called for a snap election, and a large number of Icelanders went to protest calling for his resignation.

According to The Guardian, U.K. Prime Minister David Cameron’s father, Ian Cameron, has allegedly avoided paying U.K. taxes by having an offshore company exempt from tax. The

A spokeswoman who was asked whether the prime minister’s family still had an offshore fund in Panama responded, “That is a private matter. I will focus on what the government is doing.”

Russian President Vladimir Putin had the single largest sum of money implicated so far in the Panama Papers investigation, totaling more than $2 billion. His best friend, cellist Sergei Roldugin, is accused of hiding money from Russia’s banks for Putin.

It’s clear that the level of Putinophobia has reached a level at which it’s impossible to speak well of Russia …
— Dmitry Peskov, Spokesman

A Putin spokesman immediately shot back at the allegations in a statement to The Guardian and described the accusations as a “coordinated plot against Russia.”

Russia’s TV Rain also quoted Putin’s spokesman saying, “We were expecting more impressive results from this journalistic community, they have found out little new … This kind of thing is aimed at an external audience. It’s clear that the level of Putinophobia has reached a level at which it’s impossible to speak well of Russia, and it’s required to speak ill of Russia.”

Meanwhile, Ukraine President Petro Poroshenko, who allegedly of set up a secret company, Prime Asset Partners Ltd., in the British Virgin Islands and is listed as the sole shareholder, has been cleared of wrongdoing.

The Ukrainian general prosecutor’s office said it found no proof of him committing a crime.

“According to a preliminary study of the information published by some media concerning the violation of law by President Petro Poroshenko, the general prosecutor’s office does not see any elements of a crime,” an official said.

Serhiy Leshenko, journalist and Member of Parliament, earlier called for an investigation.

In Australia, the Australian Tax Office (ATO) said it is now investigating more than 800 wealthy clients of a Panama law firm for possible tax evasion, according to Reuters.

Map of Companies and Clients in Panama Papers Leak