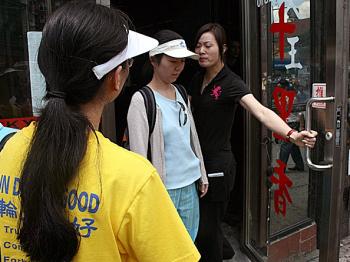 Evan Mantyk
Evan Mantyk is an English teacher in New York and President of the Society of Classical Poets.
View profile
Follow
biggersmaller
Print
NEW YORK—The U.S. Justice Department is punishing a Chinese restaurant in Flushing, Queens for discriminating against Falun Gong practitioners who wanted to eat there.

On three separate occasions in 2008, servers at the Lucky Joy Restaurant forced 10 patrons, including an eight-year-old girl, to leave because members of their parties wore shirts displaying the tenets of the Falun Gong spiritual practice, “Truthfulness, Compassion, and Forbearance,” in English and Chinese, according to an investigation conducted jointly by the Housing and Civil Enforcement Section and the U.S. Attorney’s Office for the Eastern District of New York.

“It’s disgraceful that a person would be refused service in a restaurant for doing nothing more than exercising their right to wear clothing with a religious message,” said Thomas Perez, assistant attorney general for the Civil Rights Division, in a statement released on Thursday.

“The Justice Department will continue to vigorously protect the rights of persons of all faiths to be free from discrimination in Flushing and across the country.”

The owner of the restaurant, Wu Xiaorong, admitted that the restaurant engaged in discrimination against Falun Gong practitioners and has reached an agreement with the Justice Department.

Under the agreement, Wu and all of the restaurant’s staff will attend a non-discrimination training and will adopt non-discrimination policies and procedures, which will be posted publicly in English and Chinese. The restaurant will also have to finance independent testing designed to ensure that it no longer discriminates against Falun Gong practitioners or anyone else.

Falun Gong was banned in China in 1999 when the Chinese communist regime felt intimidated by its widespread popularity. The practice is known for its meditation exercises that are often performed in public parks.

“People of all religious faiths have the right to be free from discrimination when they enter a restaurant to order a meal,” Loretta Lynch, U.S. attorney for the Eastern District of New York.

“This Office will work tirelessly to ensure that restaurant service is not denied to anyone in this district on the basis of their religion.”

The Justice Department’s investigation was conducted under the Civil Rights Act of 1964, which prohibits discrimination on the basis of race, color, national origin, and religion in places of public accommodation, such as hotels, restaurants, and places of entertainment.