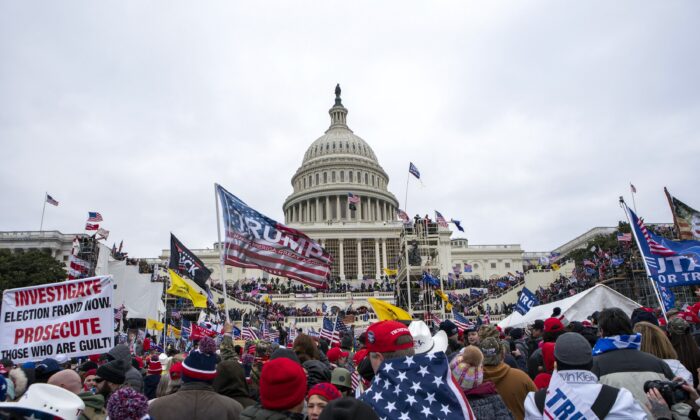 A federal judge on Oct. 13 held top Washington jail officials in contempt, finding that they violated a U.S. Capitol breach defendant’s civil rights by impeding his access to medical care.

The order doesn’t include sanctions or penalties, but was being transmitted to Attorney General Merrick Garland for an inquiry into the potential civil rights violations of defendants charged in relation to the Jan. 6 Capitol breach, “as exemplified in this case.”

“It’s clear to me the civil rights of the defendant were violated by the D.C. Department of Corrections,” Lamberth said in federal court in Washington. “I don’t know if it’s because he’s a January 6 defendant or not.”

The referral concerns the treatment of Christopher Worrell, who has been charged with civil disorder and other counts.

Worrell, who has been held since being arrested in March, has been dealing with a finger fracture and cancer, according to court records. In June, an orthopedic surgeon at a nearby hospital recommended that Worrell have surgery to repair the fracture.

A surgery for the fracture is still in the process of being approved by U.S. Marshals, Worrell’s attorneys and prosecutors wrote in a joint update last week.

Lamberth said that after receiving the update, he contacted Acting U.S. Marshal Lamont Ruffin to inquire about the subject.

Ruffin said that repeated requests for medical records from the D.C. Department of Corrections (DOC) didn’t yield necessary notes. The judge then ordered the D.C. jail and DOC to provide the records to the court.

Jail officials didn’t respond to the order, Lamberth said in a separate filing on Oct. 12. He ordered them to appear before him and show why they shouldn’t be held in civil contempt.

A lawyer for the jail argued that they had been working to get the records together to comply with the court’s order before the contempt hearing was set.

“He’s needed an operation. He hasn’t gotten it,” the judge said.

Chris Geldart, deputy mayor for public safety and justice in Washington, told The Epoch Times in an email that the DOC “has made every effort to comply with the orders of District Court including the provision of external medical records referenced in this case.”

Department of Justice officials didn’t respond to a request for comment by press time.

“Both my client and I are pleased with the outcome of the hearing and Judge Lambert’s ruling today,” Alex Stavrou, an attorney representing the defendant, told The Epoch Times in an email.