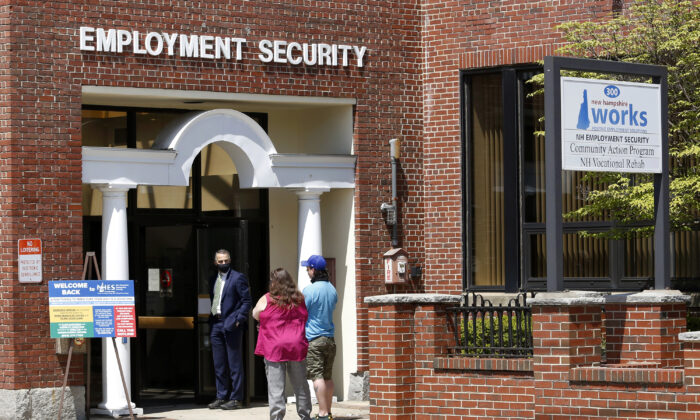 US Jobless Claims Jump to Their Highest Level in 9 Months

Initial jobless claims in the United States rose for a second week to the highest level since Nov. 26, 2021, indicating a contraction in the labor market, according to the U.S. Labor Department on Aug. 11.

The four-week moving average of initial claims, which has been rising steadily since early April, rose to 252,000, a 4,500 increase from the previous week’s average.

Jobless claim figures for some states in the latest readings have been volatile week-to-week, Massachusetts in particular.

The states with the biggest increases in claims were Massachusetts, California, and New Jersey, while the biggest declines were in Connecticut, Michigan, and Georgia.

On an unadjusted basis, initial claims increased to 203,619 last week, with Massachusetts posting the largest increase, followed by California.

Notably, continuing claims for state unemployment benefits, which economists view as a proxy for hiring, rose by 8,000 to 1.428 million in the week ended July 30, the highest in four months.

The labor market is appearing to soften despite tight conditions due to a skilled worker shortage, as the Federal Reserve continues its policy to raise interest rates to help tame inflation.

However, demand for workers may drop as the Fed raises interest rates, with most employers having largely hoarded the employees they already have so far amid the continued labor shortages.

Economists say that job claim figures are still below the 270,000–300,000 range that would signal a slowdown in the labor market.

There were 10.7 million job openings at the end of June, down from 11.3 million in May, with approximately two open positions for every unemployed worker.

The monthly July jobs report from the Labor Department on Aug. 5 showed American employers adding 528,000 workers—more than double the number of jobs forecast.

The official unemployment rate dropped to 3.5 percent, back to pre-pandemic levels, at a 50-year low.

Strangely, initial claims have gone up, while the main payrolls data showed increases in non-farm employment.

A lower-than-expected rise in consumer prices from an August 10 report from the U.S. Bureau of Labor Statistics, may alleviate pressure on the Fed to go for a larger upcoming interest rate hike.

The central bank raised its policy rate last month by another 75 basis points and has now hiked interest rates by 225 basis points since March.

Inflation may have stabilized, but it still remains at historical 40-year highs, with continuous pain for businesses and consumers.

Meanwhile, more companies, particularly in the tech sector and retail, have announced broader layoffs and hiring freezes due to future uncertainty in their industries.

“Initial jobless claims continue to signal conditions in the labor market are easing despite the red-hot July jobs report. Cooler conditions are more consistent with JOLTS data, which showed job openings dropping to 10.7 million in June from 11.3 million in May,” said Eliza Winger, an economist at Bloomberg Economics.

The U.S. economy contracted in the second quarter, with consumer spending growing at its slowest pace in two years, while business spending declined.

The second straight quarterly decline in U.S. GDP largely reflected a moderation of the pace of inventory acquisitions by American businesses.