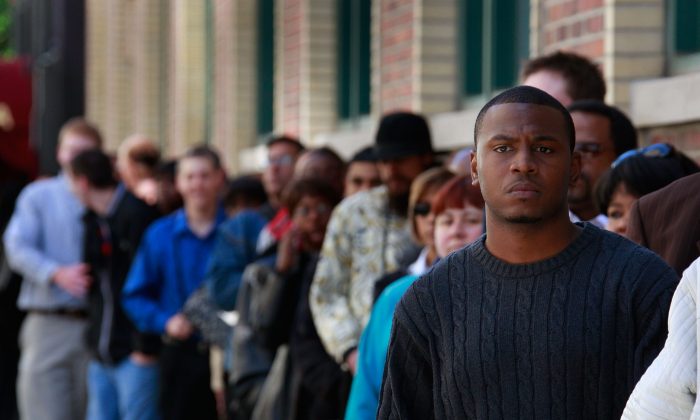 Job seekers wait in line for a job fair in Chicago on June 4, 2009. (Scott Olson/Getty Images)
US

WASHINGTON—The number of people seeking U.S. unemployment aid barely rose last week and the average level of applications in the past month fell to a 42-year low.

The figures indicate that businesses remain confident enough in the economy to hold onto their workers. Growth slowed sharply in the July-September quarter but that has not spurred widespread layoffs, though some large companies have announced job cuts.

Hiring is typically healthy when applications are low. Many economists expect job gains to rebound after slowing in August and September.

While applications are largely a proxy for layoffs, they can also fall even if layoffs are mostly unchanged. Zach Pandl, an economist at Goldman Sachs, points out that laid-off workers are less likely to seek unemployment aid when the job market is healthier than they are in a steep recession.

That’s because they may be more confident that they can quickly find work. The unemployment rate is 5.1 percent, a 7-year low, and employers have hired at a solid pace for the past three years.

Before the Great Recession, which began in December 2007, roughly 75 percent of laid-off workers sought unemployment aid, according to government data. That number ballooned during the downturn to over 100 percent, which suggests some workers who lost jobs filed multiple claims.

As the economy has recovered, that figure has fallen slightly below pre-recession levels, with roughly 70 percent of those laid-off seeking unemployment benefits. That’s a big reason applications have fallen to such low levels.

The number of people receiving benefits also slipped, to 2.14 million, from 2.18 million in the previous week.

The strong dollar, weak growth overseas and an excess of stockpiles in company warehouses have weighed on the economy since August. U.S. factory output has also fallen as oil and gas drilling companies have sharply reduced their spending on machinery and equipment.

As a result, the economy grew at a tepid annual rate of just 1.5 percent over the summer, the Commerce Department said Thursday, down from a much healthier pace of 3.9 percent in the April-June period.

Yet so far, large-scale layoffs have yet to materialize. Deutsche Bank, Walmart, and Biogen, among others, have recently announced job cuts, but overall they remain low.

Growth was held back in the third quarter as companies sold off some of their large stockpiles of goods, which means they ordered fewer new products. That cut growth by 1.4 percentage points, but is likely a temporary hit to the economy.