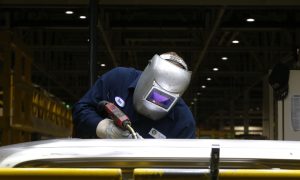 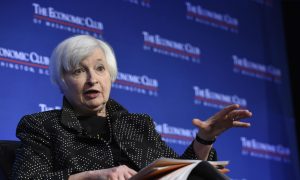 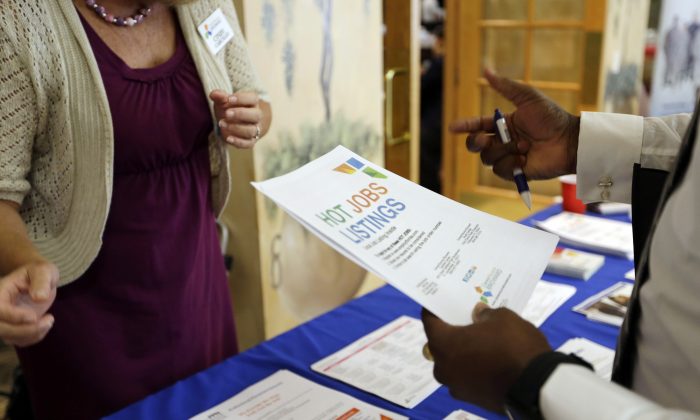 The number of job postings fell 2.7 percent to a still-healthy 5.4 million in October compared with the previous month, the Labor Department said Tuesday. That is not far from July’s record high of 5.7 million.

Hiring picked up to 5.1 million, the most since June. And the number of people quitting their jobs, a sign of confidence in the job market, rose to 2.78 million. Still, that figure has been mostly flat this year.

Even with the drop in job openings, the data suggests companies are still on the lookout for more workers. The number of available jobs has increased 11 percent in the past year. That suggests businesses are still confident enough in future demand to increase their staffs, despite drags from slower overseas growth.

The report is “broadly consistent with our view that the labor market will continue to improve but that the rate of job growth will moderate somewhat in the coming quarters,” said Daniel Silver, an economist at JPMorgan Chase.

Federal Reserve chair Janet Yellen is closely monitoring the openings, hiring and quits figures as the Fed moves closer to raising short-term interest rates. Most analysts expect the Fed to move at its meeting next week.

Other surveys indicate that companies intend to keep hiring at a solid clip early next year. Staffing agency ManpowerGroup said in a separate report Tuesday that 20 percent of 11,000 employers it surveyed expect to add workers in the first quarter of 2016.

The company’s hiring index reached the highest level for a first quarter since the beginning of 2007 just before the recession, ManpowerGroup said.

“We’ve seen strong jobs growth in the U.S. throughout 2015, along with declining unemployment and increasing wages, which brings a continued optimism for the start of 2016,” said Jonas Prising, the CEO of ManpowerGroup. “We expect these broad trends to continue going into 2016, despite ongoing challenges in certain sectors like energy and manufacturing, as well as in export driven industries.”

Rising quits can also help broadly lift wages. That’s because most people quit their jobs when they have another one lined up, usually at higher pay. More quitting also forces companies to provide raises for their existing workers to keep them from jumping ship.

Quits plummeted to just 1.6 million in August 2009, two months after the recession ended as Americans clung to the jobs they had. The figure has rebounded since then but remains below the pre-recession level of roughly 2.9 million.

The data comes after last Friday’s robust jobs report, which showed that employers added 211,000 jobs in November and the unemployment rate was unchanged at 5 percent.

Those figures are a net total: Jobs gained minus jobs lost. The data reported Tuesday, in the Job Openings and Labor Turnover survey, are more detailed. They calculate total hires, as well as quits and layoffs.