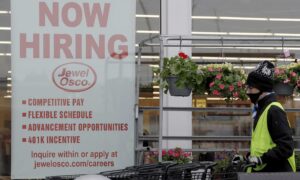 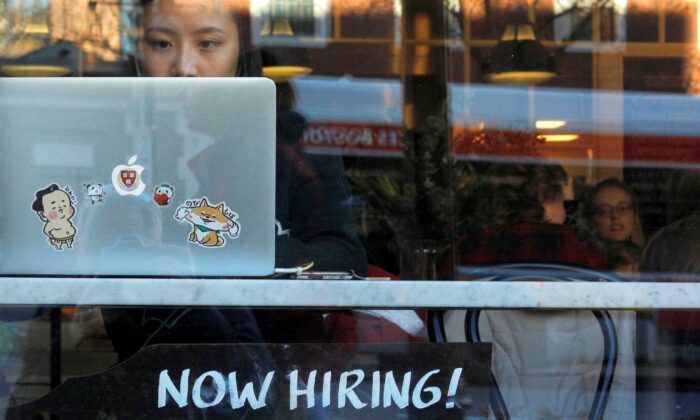 A “Now Hiring” sign sits in the window of Tatte Bakery and Cafe in Cambridge, Mass., on Feb. 11, 2019. (Brian Snyder/Reuters)
Economies

WASHINGTON—U.S. job openings increased in October, but many of the help wanted signs could disappear amid widespread restrictions on businesses to slow rapidly spreading COVID-19 infections.

The month-old Job Openings and Labor Turnover Survey, or JOLTS report from the Labor Department on Dec. 9 also showed a rise in layoffs, though a chunk reflected the discharge of temporary workers hired for the 2020 Census.

The United States is in the throes of a new wave of coronavirus infections, with the number of confirmed cases crossing the 15 million mark on Dec. 8.

“The labor market remains miles and miles away from the best economy in 50 years in February before the pandemic struck,” said Chris Rupkey, chief economist at MUFG in New York.

“October job openings are likely to disappear in a hurry relatively speaking by the end of the year with new strict stay-at-home orders issued in California this month, which is the most populous state in the country.”

Job openings, a measure of labor demand, increased 158,000 to 6.65 million on the last day of October. Vacancies are below their 7 million level in February. There were increases in job openings in the health care and social assistance industry.

Layoffs increased 243,000 to 1.7 million. That included 91,000 layoffs in the federal government, largely due to the departure of the temporary Census workers. The layoffs rate rose to 1.2 percent from 1.0 percent in September.

U.S. financial markets were unmoved by the data.

“The JOLTS data are consistent with many other labor market indicators that point to steadying out in the job market lately following a period of very strong hiring,” said Daniel Silver, an economist at JPMorgan in New York.

The JOLTS report followed on the heels of news on Dec. 4 that the economy created 245,000 jobs in November, the smallest gain in nonfarm payrolls since the jobs recovery started in May and the fifth straight monthly slowdown in employment growth. The economy has recouped only 12.4 million of the 22.2 million jobs lost in March and April.

Apart from the business restrictions to curb the out-of-control coronavirus infections, the labor market has lost momentum as more than $3 trillion in government pandemic relief has almost dried up.

Congress is negotiating another relief package. Even with a vaccine on the way, economists are warning of a slow and painful recovery for the labor market and the broader economy.

“Vaccines are on the way but it is important that Congress takes action to support the unemployed and small businesses during the period before sectors that cannot operate in a socially distanced manner can reopen,” said Conrad DeQuadros, senior economic adviser at Brean Capital in New York.

There were 1.6 unemployed workers for every vacancy in October.

“Another way to think about this, for every 16 workers who were officially counted as unemployed, there were only available jobs for 10 of them,” said Elise Gould, senior economist at the Economic Policy Institute in Washington. “That means there were no jobs for 4.2 million unemployed workers. And this misses the fact that many more  weren’t counted among the unemployed.”