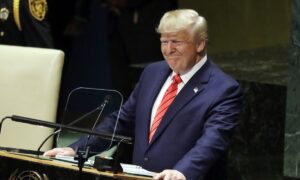 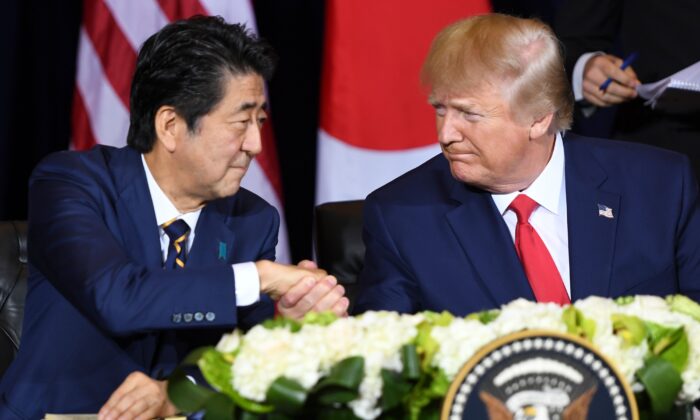 US President Donald Trump and Japanese Prime Minister Shinzo Abe shake hands during a meeting on trade in New York on the sidelines of the United Nations General Assembly, on Sept. 25, 2019. (SAUL LOEB/AFP/Getty Images)
US News

On the sidelines of the 74th session of the U.N. General Assembly, Trump held a bilateral meeting with Abe to announce the first stage of a comprehensive trade agreement between the United States and Japan.

Japan is the third-largest agricultural market for U.S. exporters, according to the Office of the U.S. Trade Representative (USTR). In 2018, the United States exported $13 billion worth of farm products to Japan, including corn, beef, and beef products, pork and pork products, soybeans, and wheat.

According to the USTR, with the new agreement “over 90 percent of U.S. food and agricultural products imported into Japan will either be duty-free or receive preferential tariff access.”

“The deal we are announcing today will reduce our chronic trade deficit built up and taken effect over many, many years of dealing with other governments and other administrations,” Trump said.

“The effects will be on Jan. 1. That’s when the tariffs will come down,” U.S. Trade Representative Robert Lighthizer told reporters after the signing ceremony.

The pending auto tariffs have been a big concern for Japan as automobile production is integral to the country’s manufacturing and economy. Automotive exports to the United States are a key source of growth for Japan, accounting for nearly 1 percent of its gross domestic product.

Lighthizer said Trump has no plans to impose Section 232 tariffs on Japan, as long as both sides “operate in good faith.”

The United States and Japan will continue negotiations on remaining items including automotive tariffs to finalize a comprehensive free trade agreement.

Trump said those negotiations would be concluded in “the fairly near future.”

Both sides also reached a separate agreement on digital trade, which has provisions similar to the rules set by the new U.S.-Mexico-Canada trade deal.

“The digital trade agreement is very much like the USMCA. It’s the gold standard. It’s, you know, the best quality agreement you can have,” Lighthizer said, adding that there was $40 billion worth of digital trade between both countries.

Key provisions of the digital trade agreement include the prohibition of data localization and commitments on cross-border data flows.

During the meeting, Trump congratulated Abe on his national election victory in July.

“A lot of people say that it was only his friendship with President Trump that got him that tremendous victory,” he said.

Speaking at the bilateral meeting, Abe said the trade deal was “a win-win solution for Japan and the United States.”

He added that U.S. trade officials led by Lighthizer were “very, very tough throughout the negotiations.”

In August, Trump and Abe announced they had reached an agreement on “core principles” of an initial trade agreement, releasing a few details on the terms.

Japan is the fourth-largest U.S. trade partner after China, Canada, and Mexico. And in August, the country surpassed China as the largest foreign holder of U.S. government debt.

Japan was also the third-largest source of foreign direct investment in the United States in 2018.

In 2018, U.S. exports to Japan totaled $121 billion, with $76 billion in goods and $45 billion in services, according to the USTR. U.S. imports totaled $179 billion, with goods accounting for more than 80 percent of imports, most notably motor vehicles and parts (30 percent).

The size of the bilateral goods trade deficit has been a source of tension for the United States, prompting the Trump administration to start new trade talks with Tokyo in 2018. The USTR in a report cited various nontariff barriers in the Japanese market as a source of the trade imbalance.