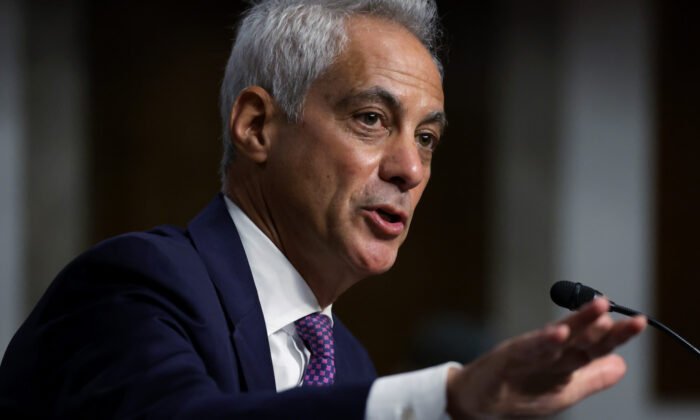 US, Japan ‘Face a Critical Juncture’, New US Ambassador Says

The newly appointed U.S. Ambassador to Japan, Rahm Emanuel, on Monday touted the U.S.-Japan alliance and said that the two nations would not “shy away” from any challenges and adversaries undermining democratic values.

Emanuel, who arrived in Tokyo with his wife on Sunday, conveyed his greetings to the Japanese people through a video message released on his Twitter account on Monday.

“We face a critical juncture, but our nations can confront common challenges, united in the belief of our shared values, our shared interests, and our shared goals,” he said.

“This work, our work will determine the destiny of the democratic example.”

Describing the U.S.-Japan alliance as “a beacon of endless possibility and promise,” Emanuel said that the partnership promoted peace and prosperity in the Indo-Pacific region for more than 60 years.

“Our two nations will not shy away from any challenge or any adversary who undermines [democratic] values. What we do in partnership over the next three years will decide America’s and Japan’s posture for the next 30 years,” he said.

His remarks came after President Joe Biden’s virtual talks with Japanese Prime Minister Fumio Kishida last week, during which the two leaders vowed to “push back” against China’s attempts to alter the status quo in the South China Sea and the East China Sea.

The White House noted that Biden “affirmed the United States’ unwavering commitment to the defense of Japan, using its full range of capabilities,” including the application of the 1960 Japan-U.S. security treaty.

The two leaders discussed the growing tensions caused by Russia’s amassing tens of thousands of troops along its border with Ukraine. Kishida pledged that his country “would be fully behind the United States” on taking strong action in response to any attack.

They also condemned North Korea’s recent missile launches as a violation of U.N. Security Council resolutions and committed to maintaining close coordination on the issue, including with South Korea.

Emanuel, 62, is a former member of the House of Representatives and was the first White House chief of staff when President Barack Obama was president and Biden was vice president. He also served as the Mayor of Chicago from 2011 to 2019.

He was sworn in as the U.S. ambassador to Japan on Dec. 22 last year, filling a vacancy left by William Hagerty’s resignation in July 2019 to run for the Senate.