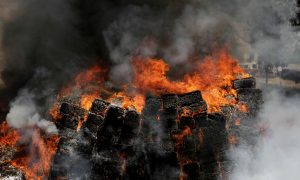 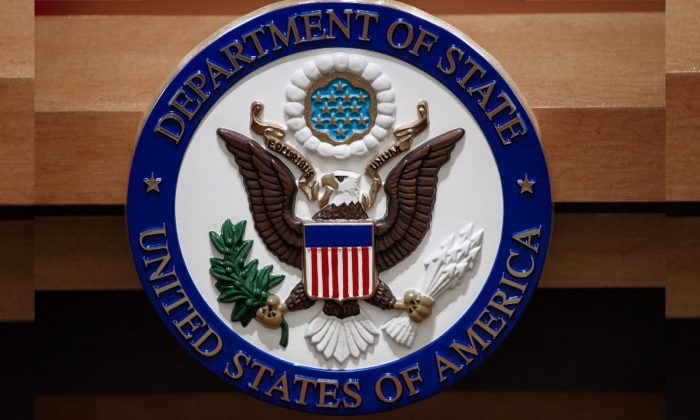 The U.S. Department of State seal as seen in the State Department briefing room in Washington in 2013. (Paul J. Richards/AFP/Getty Images)
US News

The U.S. State Department has issued a new travel warning for U.S. citizens traveling to Mexico, including “Do Not Travel” warnings to five Mexico states.

An “exercise increased caution” travel warning, due to crime and kidnapping, was announced by the department on Dec. 17.

“Do not travel” warnings apply to five Mexico states, these are: Colima, Guerrero, Michoacán, Sinaloa, and Tamaulipas.

U.S. citizens traveling to Mexico are advised to keep traveling companions and family that remain home informed of their intended travel plans, and to send a friend their GPS location. Other recommendations include: using toll roads where possible, avoid driving alone at night, exercise increased caution when visiting local bars, nightclubs, and casinos, be vigilant at banks and ATMs, and to not display signs of wealth.

As an added precaution, travelers can enroll in the Smart Traveler Enrollment Program (STEP) to receive alerts should an emergency take place.

Additionally, U.S. government employees are advised not to travel between cities after dark, to not hail for taxis on the street, and to rely on dispatched vehicles.

“The U.S. government has limited ability to provide emergency services to U.S. citizens in many areas of Mexico, as travel by U.S. government employees to certain areas is prohibited or significantly restricted,” the department’s website states.

According to Insight Crime, 17608 people were killed in Mexico from January to June 2019, making it the highest recorded homicide rate in recent history.

Mexico houses some of the largest, sophisticated, and violent organized criminal groups.

“These organizations have drawn from Mexico’s long history of smuggling and its close proximity to the United States, the world’s largest economy, to grow into a regional threat,” Insight Crime reports.

“Their armament, training and tactics have become increasingly sophisticated as the Mexican government has ramped up efforts to combat them.”

Additionally, the State Department is expected to formally designate Mexican drug cartels as terrorist organizations after President Donald Trump made the announcement on Nov. 26.

Once a group is designated as a terrorist organization, under U.S. law, it’s illegal for people in the United States to knowingly offer them support; its members can’t enter the country and may be deported. Financial institutions that become aware they have funds connected to the group must block the money and alert the U.S. Treasury Department. Suspected agents of foreign terrorist organizations can also be targeted for a certain level of surveillance under the Foreign Intelligence Surveillance Act.