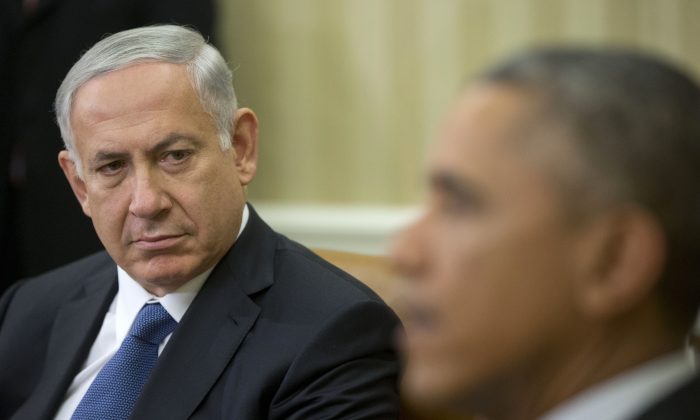 JERUSALEM—In recent months, many in the Middle East had assumed — some in hope, others with concern — that once the Iranian nuclear issue was resolved, the United States would make another push for peace between Israel and the Palestinians. But the opposite seems more likely.

After a drawn-out confrontation with Prime Minister Benjamin Netanyahu over the Iranian nuclear deal, the White House seems to have little appetite for what would almost certainly be a new round of tensions with the Israeli leader over the terms of Palestinian statehood. With the odds of success slim and U.S. elections approaching, President Barack Obama seems more interested in repairing his tattered relationship with Israel, leaving the Palestinian issue to his successor.

In recent comments, Obama has spoken of boosting security cooperation and providing upgraded military hardware to make up for Israeli misgivings over the nuclear deal. Speaking to the Jewish newspaper The Forward last week, he likened his differences with Israel to a disagreement inside a family and predicted relations would survive the test. “I think it is important for everybody to just take a breath for a moment and recognize that people on both sides of the debate love the United States and also love Israel,” Obama said. He made no mention of the Palestinian issue.

A U.S. State Department official told The Associated Press that the U.S. is not planning any bold new diplomatic initiatives after the Iran deal makes its way through Congress. He spoke on condition of anonymity because he was not authorized to speak to the media.

In Israel, there had been speculation that Obama might act otherwise. “Now that President Barack Obama has got his Iran deal … he will likely also try, in the year and four months until the presidential elections, to turn his attention to other urgent regional issues, such as Syria, and the talks or lack thereof between Israel and the Palestinian Authority,” Israeli commentator Avi Issacharoff wrote in the Times of Israel in July.

The Palestinians have also said they have received vague assurances from the U.S. that they have not been forgotten.

First is Obama’s apparent eagerness to make amends after a period of startling acrimony symbolized by Netanyahu’s controversial speech to Congress in March, when he railed against the emerging nuclear deal. Netanyahu has only stepped up his criticism since the deal was sealed in Vienna in July, having his ambassador to Washington lobby against the agreement in meetings with American lawmakers. Even after Obama secured the needed support in Congress to uphold the deal last week, Netanyahu vowed to continue fighting it.

The U.S.-led deal gives Iran relief from economic sanctions in exchange for curbs on its nuclear program. Netanyahu, with widespread support among the Israeli public, believes Iran will use its newfound funds to promote violence in the region and says the deal will not prevent Iran from ultimately gaining the ability to produce nuclear bombs. Israeli media often depict Obama as naive or even hostile to the country.

Netanyahu’s conservative government, meanwhile, shows little patience for being cajoled into concessions. Netanyahu himself declared during Israel’s election campaign in March that he would not allow a Palestinian state to be established on his watch, though he has since backtracked somewhat and said he is prepared to resume peace talks.

The United States, for its part, is entering an election season in which Obama’s Democratic Party can ill afford continued friction with Jewish Americans, a key base of support.

And one factor may override all others: The problems dividing Israel and the Palestinians seem oddly resistant to negotiation and mediation, at least under current circumstances.

Obama and his secretary of state, John Kerry, experienced this firsthand when they sponsored an ambitious round of talks that consumed much of their attention and collapsed in mid-2014 after nine months of quibbling and vexation.

It might have come as no surprise. Intervention efforts by outside powers in the Middle East — whether attacks in Iraq or Afghanistan, Libya, Yemen or mediation efforts in Syria — have not fared well of late. But even compared to those quagmires, the century-old Israeli-Palestinian conflict may be truly a case apart. Two decades of on-again, off-again negotiations have strongly suggested the sides are genuinely unable to meet in the middle on a deal.

Obama Locking Up Votes in Senate for Iran Nuclear Deal

The Palestinians seek all of the West Bank, east Jerusalem and the Gaza Strip — territories captured by Israel in the 1967 Mideast war — for an independent state. Many Israelis do seem to accept letting go of the Palestinians and allowing them have a state on most of the lands they seek. But many also insist on continued control of parts of the West Bank, citing security grounds or religious attachment to the territory.

The idea of both countries sharing Jerusalem, and its sensitive holy sites, as a joint capital is a challenge, to say the least. And Israel has no intention of accepting the principle of a “right of return” of refugees who fled its territory in 1948 and their descendants, a combined designation that numbers in the millions. Creative efforts to get around the impasse have bedeviled negotiators and mediators for some two decades.

Tellingly, opponents of Netanyahu can increasingly be heard yearning for outside pressure to move their fellow Israelis.

This derives more from concern about the Palestinians than for them. The logic is that unless Israel finds a way to truly partition, its Jewish majority will be doomed by march of demography: Israel plus the West Bank and Gaza together have some 12 million people, equally divided between Jews and Arabs, with the Arab birthrate higher. It is ironic, many say, that Netanyahu’s nationalists are the ones who are taking the Zionist project down this path.

“An honorable Israeli leadership, if there were one, would … find a solution to the Israeli-Palestinian conflict in partnership with the United States and Europe,” said Shabtai Shavit, a former director of the Mossad intelligence service, addressing a counterterrorism conference on Monday.

Obama Can Do Iran Nuclear Deal Even If Congress Disapproves

On the Palestinian side, the frustration is compounded by a sense that their moment may have passed as the world’s attention moves on to the many other wars and crises across the Arab world.

President Mahmoud Abbas has hinted in recent weeks at retiring or canceling the existing 1990s peace deals. Under those arrangements, he heads an autonomy government that governs parts of the West Bank and cooperates with Israel on security.

Palestinian officials attribute the threats to a hope by Abbas that he can somehow spur the U.S. and international community into action.

Indeed, Palestinian officials say U.S. Secretary of State John Kerry called Abbas over the weekend and promised to meet on the sidelines of the U.N. General Assembly at the end of the month. But skepticism abounds.

“There is no sign that the Americans will present anything new,” said Nabil Shaath, a senior Palestinian official. “They will keep saying that the only solution now is to make President Abbas (and) Netanyahu sit together. But we have been in this process for 22 years, and nothing has happened.”