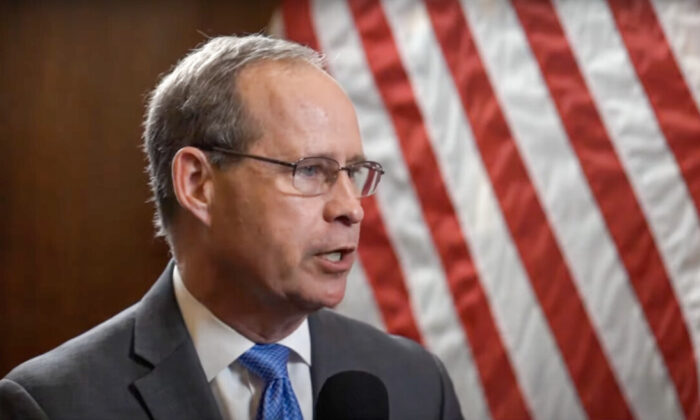 US Is Funding Russia’s War in Ukraine by Continuing Imports of Russian Oil: Rep. Greg Murphy

The Biden administration has imposed several rounds of sanctions against Russia since it invaded Ukraine. However, without cutting off the import of Russian oil and gas, the United States is funding Russia’s invasion with about $75 million a day, said Rep. Greg Murphy (R-N.C.).

“We are actually importing approximately $75 million worth of dirty Russian gas every day. We’re doing this right now. And the sanctions that were put in have now excluded a Russian energy program. And so we as Americans right now, to the tune of $75 million a day, are funding the Russian war effort,” Murphy said in a Mar. 2 interview with NTD’s “Capitol Report” program.

“I think this is horrible. It’s disastrous,” Murphy said.

When President Joe Biden announced sanctions against Russia, he specifically said the carve-outs of Russian energy were to protect American families and businesses from higher prices.

“In our sanctions package, we specifically designed to allow energy payments to continue,” Biden said on Feb. 24.

According to the U.S. Energy Information Administration data, the average monthly crude oil and gas imported from Russia in 2021 were 20.4 million barrels. That’s roughly 680,000 barrels a day.

There have been bipartisan calls for energy sanctions against Russia in the last few days.

Manchin has accused Biden of being “hypocritical” for continuing to import Russian oil while limiting domestic energy production.

Biden has paused construction of the Keystone XL pipeline since he took office. He also placed a moratorium on leasing federal lands to oil and natural gas producers.

“I’m all for that. Ban it,” she said at Thursday’s weekly news conference.

On Thursday, White House press secretary Jen Psaki said that “we don’t have a strategic interest in reducing the global supply of energy.”

“Our objective and the President’s objective has been to maximize impact on President Putin and Russia while minimizing impact to us and our allies and partners,” Psaki said, adding banning Russian oil imports would raise prices at the gas pump.

Murphy noted how the United States was energy independent under former President Donald Trump. But Biden’s policies changed that.

“We have the ability in this country to energize ourselves, and Biden administration, again, as usual, has been tone-deaf to really what is important in this world and the right way to act upon it,” said Murphy.

Earlier Wednesday, when reporters pressed Biden on sanctioning Russian oil imports, he said, “nothing is off the table.”

On Friday, Psaki said, “we are looking at options we could take right now to cut U.S. consumption of Russian energy, but we are very focused on minimizing the impact to families. If you reduce supply in the global marketplace, you are going to raise gas prices.”