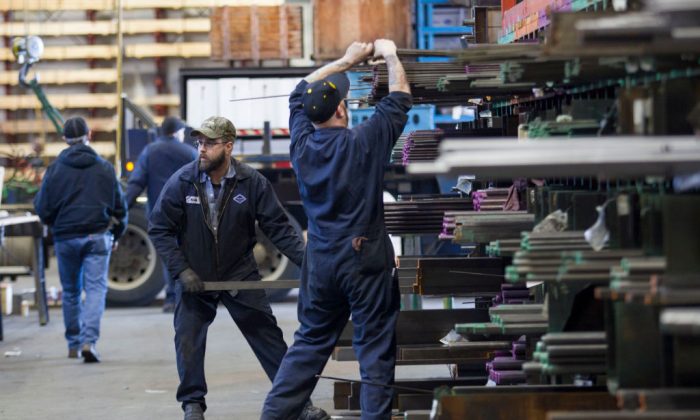 Laborers fill orders of machine grade steel to be shipped throughout the Pacific Northwest at the Pacific Machinery & Tool Steel Company in Portland, Oregon, on March 6, 2018. (Natalie Behring/Getty Images)
Politics

US a Strong Bet for Foreign Investors

'Protectionist rhetoric' may attract more investment, according to experts
By Emel Akan

WASHINGTON—The United States receives the lion’s share of the world’s foreign direct investments (FDI). Despite rising anti-globalization and protectionist sentiment, the country is expected to strengthen its reputation as the most attractive hub for international investors.

The United States remained the largest recipient of FDI in 2017, attracting an estimated $311 billion in inflows. This investment was more than double that of China, the next closest rival to the United States.

“It is a terrific market to invest,” said Richard Chin, executive vice president of SK Group, one of the largest conglomerates in South Korea, with more than 70,000 employees around the world.

“We have invested in the United States, and we will continue to invest,” he added.

The United States has been the top destination country for Japanese investors for the last eight years, accounting for nearly 30 percent of the nation’s outward investments in 2017.

Many Korean companies have operations in the United States, and they will benefit from the Trump administration’s deregulation push, said Eom Chi-sung, secretary general of the Federation of Korean Industries.

He thinks there will be more investment into the United States as the recent 16 percent jump in the minimum wage in South Korea has created a challenging business environment. Trump’s policies, including tax reform and deregulation, have made the United States a more attractive destination, he said.

Even Trump’s protectionist policies—although worrisome for Korean exporters—would promote investment in the country, he added.

“He is a very smart guy,” Chi-sung said, referring to Trump.

In January this year, the United States began imposing tariffs of up to 30 percent on solar panels and up to 50 percent on washing machines, which were the first levies slapped on by the administration, followed by steel and aluminum tariffs in March.

Americans, however, are seeing the benefits of these policies, according to Trump’s top trade adviser, Peter Navarro.

“Many tariff skeptics criticized this presidential action,” he wrote in an op-ed for USA Today. “But already this nation has had an influx of announcements of new investments to build factories that will make American solar panels and washing machines with American hands and with American materials.”

Multinational firms are now adapting to these new changes by focusing more on FDI than on trade.

“In a time of rising anti-globalization and protectionist sentiments, investors tell us they are continuing to rely on FDI for growth strategies,” Paul Laudicina, a partner and chairman emeritus at management consulting firm A.T. Kearney, stated in a report. “In contrast to international trade, FDI enables a company to establish a local presence.”

For the fifth year in a row, the United States has topped A.T. Kearney’s FDI confidence index.

And “protectionist rhetoric” is one of the factors that motivate foreigners to invest in the U.S. market, as FDI gives them a local footprint in the world’s largest economy, said the report.

The UK, Canada, Japan, and Germany are the nations investing the most in the United States.

“The American economy is in a very good condition and it is still expanding,” said Isamu Wakamatsu, executive director at Japan External Trade Organization (JETRO).

However, they are increasingly concerned about labor shortages and wage increases, according to Wakamatsu.

They are also worried about the outcome of trade negotiations, especially the fate of NAFTA, as many Japanese companies have supply chains in Mexico and Canada, he said.

In the past decade, Mexico has become an important production hub for Japanese carmakers like Toyota, Honda, Nissan, and Mazda.

Despite uncertainties, 45 percent of Japanese companies operating in the United States plan to expand their workforce, according to a survey by JETRO. And the majority of firms are expecting increased profits from corporate tax cuts.

U.S. tax reform is expected to have significant implications for the global FDI landscape. The tax bill could lead to the repatriation of nearly $2 trillion of overseas funds, according to the U. N. Conference on Trade and Development.

In addition, the Trump administration has rolled out a $1.5 trillion plan to renew U.S. infrastructure. The plan relies on funding from state and local governments as well as private investors.

Infrastructure projects are attractive asset classes for global investors due to their long-term and predictable nature. However, the success of these projects depends on the administration’s continued effort to slash regulatory hurdles and streamline the permitting process. Trump’s infrastructure plan aims to shorten the permit approval process from 10 years to two years.

Aside from red tape, another significant challenge for investors is labor shortages due to a growing skills gap,  as companies struggle to find suitable workers. With the economy getting closer to full employment, it will be an even bigger challenge going forward.

The skills shortage is a broad issue in the United States that affects many industries. However, it is becoming even more pressing for manufacturing, the largest sector in terms of foreign investment.

Whether the United States will retain its status as the world’s top investment destination depends mainly on its ability to address these issues, say experts.