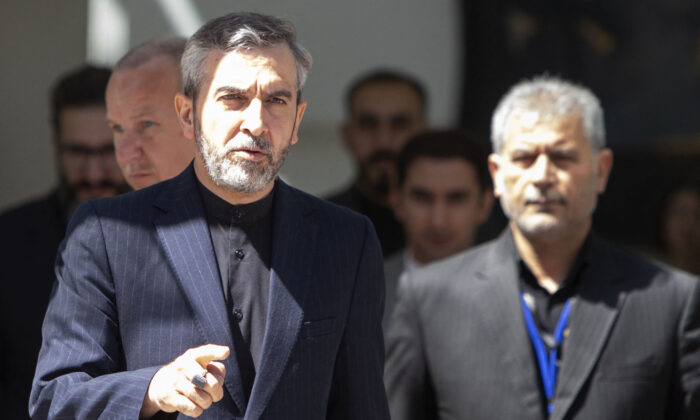 The U.S.-Iran nuclear talks that continue to hang by a thread have disrupted the world’s focus on Iran’s various malign activities, particularly the alleged recent targeted attacks against noted Americans on American soil and Iranian dissidents around the world, according to experts.

While the West has for decades condemned Iran’s global terrorism apparatus, including its attacks against dissidents, the experts said it hasn’t done enough to curtail such activity while the regime has become more sophisticated by the day.

This year alone, the Islamic regime has been linked to an Aug. 21 bomb plot against Iranian pop singer Ebrahim Hamedi in Sweden, a July 29 assassination plot against activist Masih Alinejad in New York, an Aug. 12 attack on Salman Rushdie in New York, and alleged plots to kill Israeli tourists and businesspeople in Istanbul in June this year. Earlier notable cases include assassination plots in Denmark against an Iranian-Arab opposition.

The plot against Bolton was in retaliation for the January 2020 death of Iran’s Islamic Revolutionary Guard Corps – Qods Force (IRGC-QF) commander Qasem Soleimani, according to an Aug. 10 statement by the U.S. Justice Department on charges against a member of IRGF-QF. The plot against Pompeo was due to his potential 2024 presidential run, according to various media reports.

Jason M. Brodsky, Policy Director of U.S.-based United Against Nuclear Iran told The Epoch Times in an email that Iran has invested in developing networks to attack Americans and dissidents, according to multiple U.S. intelligence community Worldwide Threat Assessments.

“Its latest targeting of current and former U.S. officials and dissidents on American soil represents an unprecedented uptick in this practice, which has been ongoing since 1979,” said Brodsky.

The FBI is currently investigating the recent assassination plot against Alinejad, who was also the target of a kidnapping plot by four Iranian spies last year, according to charges by U.S. prosecutors.

The activists’ case was highlighted last year by Washington-based Abdorrahman Boroumand Center for Human Rights in Iran (ABC), which has identified 540 people who were either abducted or killed in Europe and the Middle East by Iranian intelligence. That list is not conclusive.

Of these 540 cases, 329 were successfully targeted in Iran’s neighboring countries, particularly in Iraqi Kurdistan from the 1990s to 2013. The rest were killed or abducted in France and Germany, with the operation also reaching countries like the Philippines and Poland, according to the ABC.

The Alinejad case “fits a decades-long pattern of intimidation, extrajudicial killings and abductions of dissidents meant to undermine political and religious groups, silence activists and journalists, and prevent the mobilization of effective opposition movements inside and outside the country,” said the organization in a statement after the kidnapping plot came to light.

Hamid Bahrami, an independent Middle East expert, told The Epoch Times in an email that Iranian terrorism operations are different from other terrorist operations because they are able to use diplomatic measures for planning and organizing attacks.

Bahrami pointed to last year’s conviction of an Iranian diplomat from the Iranian embassy in Vienna, Assadollah Assadi, 49, who was sentenced to 20 years’ jail by the court in Antwerp, Belgium, for plotting to bomb a French rally held by an exiled Iranian opposition group.

“Assadi carried the bomb in a diplomatic bag, exempt from security searches, on an Austrian Airlines flight. Terrorist groups like Al-Qaeda do not have such facilities or opportunities. The Iranian terrorists also have impunity as the West has closed its eyes on Iran’s hostage diplomacy for any exchange between its arrested or convicted terrorists with innocent hostages in Iran,” said Bahrami. Incidentally, Assadi was the first Iranian official to be charged in the EU since the 1979 Iranian Revolution.

The Iranian regime has been subject to harsh political sanctions and isolation for its support of terrorism. In response to this the IRGC recruits and trains “agents from drug gangs” for targeting Iranian dissidents and Israelis, according to Bahrami.

The Belgian Parliament ratified a controversial treaty with Iran on July 20 that will allow prisoner swaps between the two countries. Bahrami worries that this will eventually lead to the release of Assadi.

He compared it with the last year’s case of Thailand transferring three Iranians involved in a botched 2012 bomb plot back to Tehran, as Iran released an Australian academic who was imprisoned for more than two years on spying charges. The three Iranians were linked to a wider bomb plot targeting Israeli diplomats.

With the Biden administration pursuing a nuclear deal with Iran there have been wider concerns that this will not lead to better behavior from Iran or pressure it to shun its terrorist modus operandi including its targeted attacks against dissidents and adversaries.

The Iranian regime “calculates that the benefits outweigh any costs of such operations—and it signals the Iranian system remains confident that they won’t impact the nuclear talks because it seems like nothing does,” said Brodsky when asked about the latest targeting of current and former U.S. officials and dissidents on American soil.

Since the nuclear talks started between the United States and the Iranian regime this year there’s been little indication that it will come through despite the buzz in the media and diplomatic circles about it. France, the UK, and Germany criticized Iran’s stance in nuclear talks on Sept. 10 after Tehran demanded that the U.N. watchdog probe its unexplained uranium traces be ended.

“Iran’s system is signaling it isn’t interested in a deal on reasonable terms,” said Brodsky. “While there are some in Tehran who favor a return to the [Iran nuclear deal], the supreme leader is still opposed, and he is the decision-maker. This is why Iranian negotiators keep asking for more to convince Ayatollah Khamenei.” He added that the talks are also stuck because the Iranian regime is demanding more guarantees that a future U.S. president will not withdraw from the treaty that is otherwise a technically non-binding political understanding.

Meanwhile, there are already demands for a stronger nuclear treaty—Israel has said that the feasible timeline for reviving the 2015 nuclear deal is already over and thus the current one is obsolete. Bahrami said Iran’s behavior is “shockingly” not waking the world leaders to the Iranian regime’s unconventional modus operandi for attacking political opposition, dissidents, and global adversaries abroad.

“As the Iranian regime has not been held accountable for its terrorism—particularly for using diplomatic measures for terrorism—Biden’s Iran policy and any nuclear deal will not only legitimize Tehran as a normal state, but also provide them billions of dollars, which will be spent to develop the new terrorism network based on its narcotic network across the world,” said Bahrami.

The Islamic regime remains confident that its support of terrorism will not impact the nuclear talks and the West’s outreach because most of these cases of targeted attacks have been handled in the West as law-enforcement matters with an indictment of individuals in Iran who will likely never see an American courtroom, according to Brodsky.

The national reactions to these cases have been mostly “a statement from the U.S. government warning and condemning, and at times a few piecemeal sanctions of individuals who have no assets in the West. Other than those penalties, there have been no policy consequences imposed by the U.S. government or Europe [such as] diplomatic isolation or kinetic retaliation. That must change if the West wants to deter this behavior.”

Brodsky said that, “deal or no deal,” Iran will continue its support for terrorism. “This is why the U.S. needs a comprehensive strategy that tackles its nuclear and non-nuclear malign activity.”