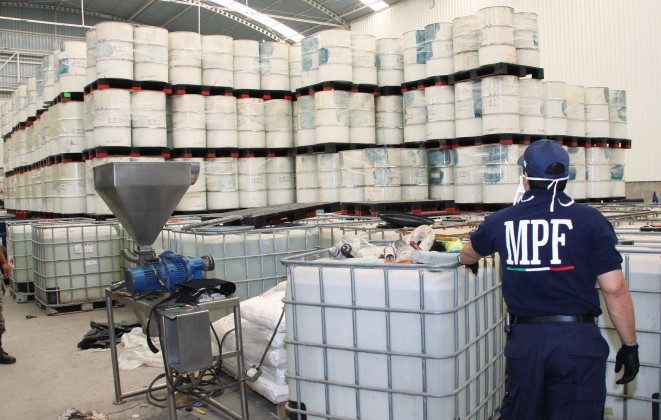 An officer from the Federal Public Ministry looks at drums of precursor chemicals for methamphetamine that were seized in Queretaro, Mexico, on June 20, 2011. (AP Photo/Attorney General's office, File)
China

The growing epidemic of methamphetamine and other synthetic drugs in the United States and Latin America is being fed by shipments from China that provide the ingredients. To curb the flow of Chinese chemicals used in drugs, the United States is investing in local security.

A U.S. presidential memorandum issued to the secretary of state on Sept. 13, details efforts to curtail the transit and production of drugs and the chemicals to make them.

It states that cooperation between several countries to “stem the smuggling of essential and precursor chemicals from China used to produce illegal synthetic drugs in Central America” has been a key part, in particular, of the Central American Integrated System’s (SICA) mandate on citizen security and other programs.

SICA is an economic and political organization of Central American states, similar to the European Union. Several countries outside Central America are also on as regional or extra-regional observers.

The presidential memorandum states that SICA’s efforts to stop the flow of China’s precursor chemicals “is aligned with the growing abuse during the last decade of new psychoactive substances (NPS), the production of which is a growing problem in Central America.”

Central America has been largely successful with efforts to capture shipments of the illegal chemicals used in the NPS. Yet according to the memorandum, the large number of seizures has led to problems with managing and disposing of the chemicals, which the United States proposes to help them solve.

The chemical precursors being shipped from China are being run through the Chinese triads—mafia organizations that often have ties with Chinese business or township associations, according to China Brief, a publication of the Jamestown Foundation. The triads have worked with Mexican drug cartels, including Los Zetas, to transport chemical precursors.

The impact of drug trafficking organizations has been detrimental to the region. According to a May 7 report from the Congressional Research Service, the activities of transnational gangs (such as the triads), and other criminal groups funded by drug money “threaten to overwhelm Central American governments.”