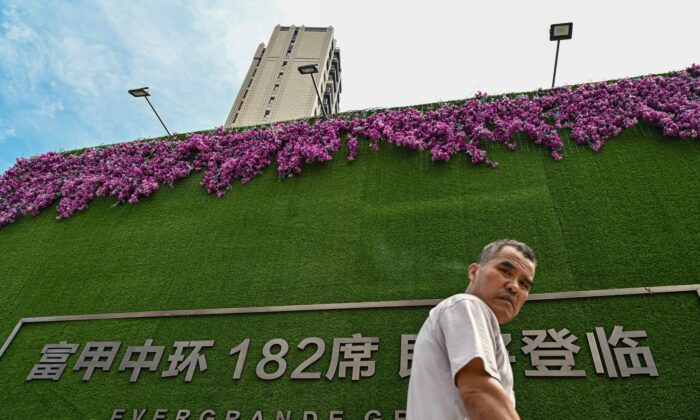 A man walks past a residential building developed by Evergrande in Shanghai on Sept. 24, 2021. (Hector Retamal/AFP via Getty Images)
Thinking About China

We’re about to find out just how “free” China’s financial markets really are.

As the restructuring saga around real estate developer China Evergrande continues to drag on, recent developments could escalate into a financial standoff never before seen in China’s capital markets.

A U.S. distressed credit fund—which owns a piece of Evergrande’s defaulted dollar bonds—has thrown down the gauntlet in a bid to protect its interests, potentially ruining the Beijing regime’s plans to restructure and rescue Evergrande.

Here’s the background. After leverage limits on China’s property developers were tightened by Beijing, Evergrande finally defaulted on its offshore bonds in December 2021. Since then, the Beijing and Guangdong governments have attempted to avoid a disorderly collapse of the company by orchestrating a proposed restructuring.

Full details are still being worked out, but it’s believed that Evergrande could be liquidated, and its assets sold off to various state-owned and private holders. In turn, Beijing will approach its domestic and foreign creditors to negotiate a settlement, which would be funded by proceeds from the sales of such assets or swapped for interests in existing projects or collateral.

Evergrande’s U.S. dollar-denominated creditors and bondholders are obviously nervous about how much they would eventually recover. As they should be. Beijing, for its part, has urged offshore creditors not to pursue aggressive legal action against Evergrande and to remain patient.

None of this is unusual—except what happened next.

In late January, distressed-credit investment manager Oaktree Capital seized a 2.2-million-square-foot plot of land in Hong Kong that was owned by Evergrande, where the developer had intended to build a vast mansion for its founder, dubbed “Project Castle.”

The move throws Evergrande’s restructuring plans into jeopardy, as the property was supposed to be a key piece of collateral in a pool of assets used to satisfy bondholders.

In a separate move, the Financial Times reported that Oaktree has seized another Evergrande asset, this time in mainland China. This resort and entertainment project, on the Yellow River delta, is called “Venice” and is one of Evergrande’s most prized development projects.

These brazen maneuvers aren’t unheard of in bankruptcy and restructuring negotiations. The “distressed-debt” corner of Wall Street isn’t for the faint of heart. Hardball, aggressive tactics are part of the playbook for experienced distressed credit hedge funds such as Elliott Management, Appaloosa Management, and Oaktree. It’s how they’re able to turn pennies invested into dollars returned.

But Oaktree’s moves are absolutely unheard of in China.

The fund is openly challenging Evergrande—and, by extension, the Guangdong government, the Chinese Communist Party (CCP), and China’s legal system.

Oaktree’s challenge to the CCP’s Evergrande restructuring plans in Hong Kong is already very problematic. Hong Kong courts could let the negotiations play out in a similar fashion to how they are done in the West—dragged out and ugly. But given how politically sensitive Evergrande is, we don’t know.

We won’t speculate on how the mainland China “Venice” project will proceed. Foreign players are fully at the mercy of the CCP-controlled Chinese court system. But these matters are usually handled by the local courts. The interplay between the local courts and CCP headquarters in Beijing, given Evergrande’s national significance, will be interesting.

What’s clear is that the Los Angeles-based Oaktree has put the CCP in a tough position.

Will the CCP intervene in Hong Kong courts, and disallow Oaktree’s receivership? Will Beijing tell the Chinese courts to invalidate Oaktree’s claims with regards to “Venice”? And will Beijing blacklist Oaktree from investing in Chinese debt going forward?

If the CCP does step in and rejects Oaktree’s legal position, Chinese companies will have an impossible time obtaining offshore financing going forward, and Hong Kong’s position as Beijing’s designated “offshore” money center will effectively end.