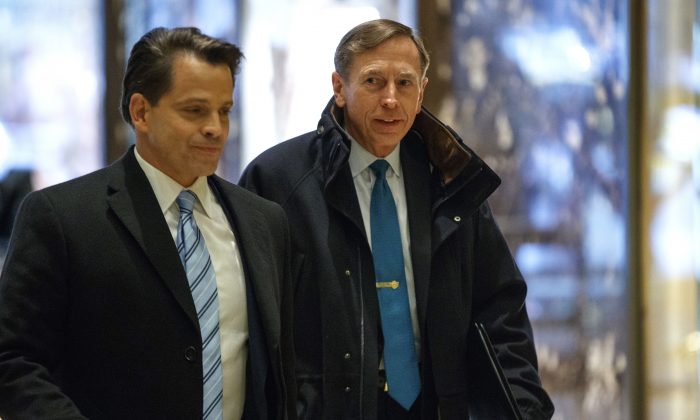 WASHINGTON—The Defense Department is conducting a leaks investigation related to the sex scandal that led to the resignation of former CIA Director David Petraeus, The Associated Press confirmed Monday, the same day Petraeus was meeting with President-elect Donald Trump in New York.

Petraeus, who could be in line for a Cabinet nomination, arrived at Trump Tower in early afternoon. He walked in without taking any questions from reporters.

A U.S. official told the AP that investigators are trying to determine who leaked personal information about Paula Broadwell, the woman whose affair with Petraeus led to criminal charges against him and his resignation. The information concerned the status of her security clearance, said the official, who was not authorized to discuss an ongoing investigation by name and spoke on condition of anonymity.

Disclosure of the Broadwell information without official permission would have been a violation of federal criminal law.

The latest twist in the case could complicate Petraeus’ prospects of obtaining a Cabinet position in the Trump administration, resurfacing details of the extramarital affair and FBI investigation that ended his career at the CIA and tarnished the reputation of the retired four-star general.

He pleaded guilty last year to one misdemeanor charge of mishandling classified information relating to documents he had provided to Broadwell, his biographer. He was spared prison time under a plea agreement with the Justice Department. The Army in late 2012 suspended the security clearance of Broadwell, a former Army intelligence officer. Such a move is routine when a person is under investigation, particularly in a case of a possible security breach.

The investigation began after a Petraeus friend, Jill Kelley, complained to the FBI in 2012 about harassing emails from an unknown person who turned out to be Broadwell.

During his campaign, Trump repeatedly lambasted Hillary Clinton, who had come under federal investigation for her use of a private email server as secretary of state. He suggested her actions were far worse than those by Petraeus.

FBI Director James Comey has drawn a distinction between the two cases, saying they “did not find clear evidence” that Clinton or her aides had intended to break the law through her “extremely careless” handling of “very sensitive, highly classified information.” Federal prosecutors said Petraeus knew black binders he shared with Broadwell contained classified information, but he nonetheless provided them.

Broadwell did not immediately return a phone message or email seeking comment Monday.