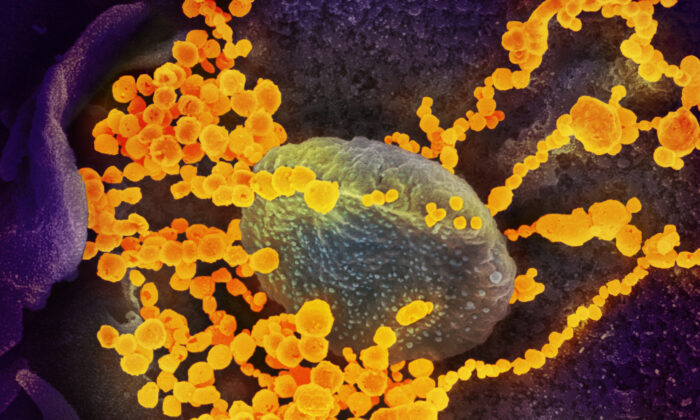 This scanning electron microscope image shows the SARS-CoV-2 virus (round yellowish objects), which The Epoch Times refers to as the CCP virus, emerging from the surface of cells cultured in the lab. Photo published Feb. 19, 2020. (NIAID-RML)
Pandemic Ties to CCP

US Intelligence Agencies Not Sure Where, How COVID-19 Originated

U.S. intelligence agencies do not know the origins of the virus that causes COVID-19.

“The U.S. Intelligence Community does not know exactly where, when, or how the COVID-19 virus was transmitted initially but has coalesced around two likely scenarios: either it emerged naturally from human contact with infected animals or it was a laboratory accident,” Amanda Schoch, assistant director of national intelligence for strategic communications, said in a statement on Thursday.

Two elements of the community lean toward the former scenario while one leans toward the latter. However, all three have low to moderate confidence. Additionally, the majority of elements within the community “do not believe there is sufficient information to assess one to be more likely than the other,” Schoch said.

The first cases of COVID-19, which is caused by the CCP (Chinese Communist Party) virus, appeared in China in late 2019.

Chinese officials have claimed the virus originated outside the country but it is widely believed to have come from a top-level laboratory in Wuhan, where the initial cases were detected, or from a seafood market near the lab.

Many media outlets and others falsely claimed last year that the theory that the virus originated from the lab was debunked. In recent days, they have walked back those claims. Facebook, which relies on outlets to crack down on so-called disinformation, is now no longer banning posts suggesting the virus was manmade. Several top officials, including Dr. Anthony Fauci, have said they support probes after previously suggesting the virus stemmed from a human-animal interaction.

“By contrast, little circumstantial evidence has emerged to support the [CCP’s] claim that COVID-19 was a natural occurrence, having jumped from some other species to humans.”

President Joe Biden said Wednesday that U.S. intelligence officials believe there’s two likely scenarios regarding the origins of the virus. Those are a lab accident or natural development.

Biden asked the intelligence community, which consists of some 20 agencies, to report to him within 90 days after collecting and analyzing “information that could bring us closer to a definitive conclusion.”

Biden told reporters on Thursday that he will release the report to the public “unless there’s something I am unaware of.”

The State Department reportedly shut down its probe into the virus origins. Mike Pompeo, former director of the agency, accused the Biden administration of siding with China and the World Health Organization as he shared one of the reports on social media. “This isn’t political. America must lead on this,” he said.

The State Department has called the reporting incorrect and said the probe wound down in March after a department bureau briefed Biden on what it had found.

“With the report delivered, the work was ended,” a State Department spokesperson told The Epoch Times via email. “All relevant parts of the Department continue to work with the interagency on this matter.”

The White House has said it supports a World Health Organization-led probe, even though the international agency is tight with Chinese leaders and previously issued a report claiming the virus “very likely” spread from animals to humans.

“The United States will also keep working with like-minded partners around the world to press China to participate in a full, transparent, evidence-based international investigation and to provide access to all relevant data and evidence,” Biden said.