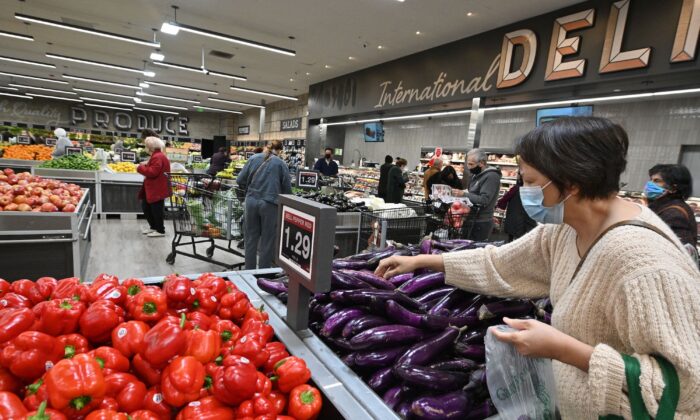 People shop for groceries at a supermarket in Glendale, Calif., on Jan. 12, 2022. (Robyn Beck/AFP/Getty Images)
Inflation

On a month-over-month basis, the consumer price index (CPI) rose 1.2 percent, while the core CPI edged up 0.3 percent.

All the indexes increased notably in March, with the inflation reading being broad-based and across the board.

Before the release, the White House warned Americans that they needed to brace for an “extraordinary elevated” report, blaming it on “Putin’s price hike.” Still, the administration has insisted that prices could start to come down toward the end of the year.

With consumer and producer prices climbing to levels unseen in decades, some wonder if March’s sky-high headline reading is really the peak of today’s inflationary environment.

“I believe that inflation should start paring off in Q3 of 2022 as some of the supply chain disruption abates. However, it will stay at a worryingly high level,” Carlos Legaspy, the owner and CEO of Insight Securities, told The Epoch Times.

But high inflation will persist amid the military conflict in Eastern Europe, the global supply chain crisis, and the broad array of shortages throughout the economy.

Others believe it’s challenging to determine whether price inflation will diminish soon, because this is a different type of inflation than the United States has experienced in the past.

“I think that’s a very tough call to make. If you simply look at the money supply, it increased exponentially in the last couple of years, largely because of stimulus programs implemented to offset the impacts of COVID,” Scott Sheridan, a market expert and CEO of tastyworks, an online brokerage firm, told The Epoch Times.

“Because of that, I’m not surprised we’re seeing inflationary pressures. But those are being exacerbated by geopolitical situations with respect to Russia/Ukraine and supply chain issues. Because of that, I think it’s a much more nuanced conversation than typical inflation discussions we’ve had in the past.”

Kelvin Stewart, the owner of small business USBadCreditLoans.com, feels the strain as the cost of housing, health care, electricity, and groceries rises. In just four months, he claims to have seen more than 160 percent increase in kitchen appliances, for example.

“In December 2021, I paid $1,800 for a complete set of kitchen appliances, four pieces, delivered and installed,” Stewart told The Epoch Times.

“My brother purchased the identical appliances and models from the same place last week for $4,700 cash and without delivery,” he said.

Inflation is out of control, according to John Frigo, an e-commerce manager at Bestpricenutrition.com.

It feels like 24 to 30 percent, he said, adding that “it’s evident when you look at how much the price of gas has gone up as well as food, building materials, used cars, and homes.”

“If you’re not seeing higher prices, you’re likely seeing shrinkflation,” he said. “I recently noticed the sparkling water I buy weekly is the same price, but I now get eight cans per case instead of 12.”

Rising prices have also changed how consumers live and spend their money.

“With constant increases to prices with no change in my salary, I’ve found myself focused on budgeting more than ever,” said Kevin Nguyen, a blogger.

“Instead of going out and eating with friends, we’ve found that we have been having more and more potlucks at friends’ places, as it is much more affordable as opposed to eating at a restaurant,” he told The Epoch Times.

Consumers are concerned about inflation as they anticipate prices reaching new highs in the short-term, according to the Federal Reserve Bank of New York’s Survey of Consumer Expectations.

“Inflation has impacted small businesses throughout the country and is now their most important business problem,” said NFIB chief economist Bill Dunkelberg in a statement. “With inflation, an ongoing staffing shortage, and supply chain disruptions, small business owners remain pessimistic about their future business conditions.”

The monthly survey also revealed that owners anticipating improved business conditions over the next six months declined to a net negative 49 percent, the lowest level in the study’s 48-year history.

Will the Fed Stop Inflation?

The expectation is that the Federal Reserve will raise the benchmark fed funds rate by 50 basis points at next month’s Federal Open Market Committee (FOMC) policy meeting.

Minutes from the March FOMC meeting revealed that the central bank is prepared to employ half-point rate boosts to cool inflation while shrinking the balance sheet by $95 billion.

Multiple officials have also conceded that it’s time for the institution to become more aggressive when tightening monetary policy.

Chicago Fed President Charles Evans said Monday that pulling the trigger on a 50-basis-point rate hike in May is “highly likely.”

James Bullard, the St. Louis Fed president, reiterated his stance last week that the Fed is behind the curve on inflation and that the body needs to get ahead by moving forward with “bigger moves.” He wants to see the key interest rate at 3.25 percent by the end of the year.

But is this enough to curb inflation? Not quite, says William Stack, a financial adviser and author at Stack Financial Services.

“There are many elements to inflation that the Federal Reserve is finding hard to contain, that cannot be disrupted by traditional tools such as rising interest rates,” he told The Epoch Times.

“The Federal Reserve will be hard-pressed to manage inflation in this environment, which they ironically helped create by excessive purchasing of U.S. Treasury debt that no one else would buy, thereby flooding the landscape with currency.”

Can a half-percentage-point increase in May buy the U.S. time? Global financial markets will be monitoring the situation.