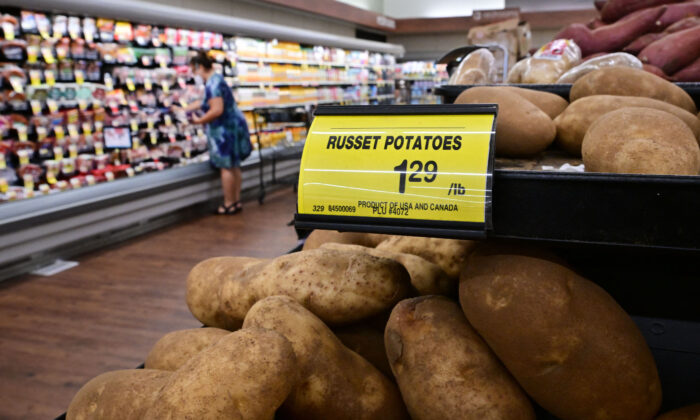 A shopper is seen past a sign displaying the price per pound of russet potatoes at a supermarket in Montebello, Calif., on Aug. 23, 2022. (Frederic J. Brown/AFP via Getty Images)
Inflation

US Inflation Comes in Higher Than Expected as Food, Shelter Costs Surge

The U.S. annual inflation rate came in at 8.3 percent in August, higher than the market forecast of 8.1 percent, according to the Bureau of Labor Statistics (BLS). This is slightly down from the 8.5 percent reading in July.

The core inflation rate, which strips the volatile food and energy sectors, also advanced to 6.3 percent last month. This was also higher than the market expectation of 6.1 percent and up from 5.9 percent in July.

Food and shelter costs contributed to the inflation numbers as they increased 11.4 percent and 6.2 percent, respectively, year-over-year.

Within the food index, most items were up on both a year-over-year and month-over-month basis.

BLS data further showed that meat was mostly up across the board, with uncooked ground beef up 7.8 percent, chicken jumping 16.6 percent, ham rising 9.2 percent, and pork surging 6.8 percent.

On a positive note, airline fares, which were up by about 33 percent year-over-year, fell by 4.6 percent on a monthly basis in August.

U.S. stocks reacted to the hot inflation report. The Dow Jones and the S&P 500 were down 2.7 percent and 3 percent, respectively, during midday trading on Sept. 13, while the NASDAQ was down 3.85 percent.

The large increase in the year-over-year rate of core inflation was especially disappointing, he added.

“We’ve been sort of hoping that we could put this worst episode of inflation behind us, and we may have seen a peak, but it’s certainly not leveling off at a substantial pace.”

Expectations that the Federal Reserve will need to aggressively boost interest rates to bring down inflation drove up Treasury yields. The 10-Year Treasury yield jumped by 7.5 basis points to 3.439 percent after the disappointing CPI report.

Jan Szilagyi, the CEO and co-founder of investment firm Toggle AI, says that investors will now be monitoring the pace of declining inflation rather than the peak.

“This was last big piece of economic data on the way before the Fed meets next week to decide its next interest-rate move,” he stated in a note. “Because core inflation also came in higher than expected—6.3% vs. 6%—the focus for investors will now be the pace of decline rather than the peak. The assumption is that the worst of inflation is behind us but has it been entrenched, and will it require a longer (and more aggressive) tightening to conquer it.”

The latest CPI numbers come after the Federal Reserve Bank of New York’s Survey of Consumer Expectations (SCE) found that one-year consumer inflation expectations fell to 5.7 percent in August, down from 6.2 percent in July.

Financial markets have cheered anytime there is the slightest hint of easing inflationary pressures because investors think this would prompt the Federal Reserve to slow down its pace of rate hikes or to cut interest rates.

Central bank officials have repeatedly stated that they do not intend to turn dovish during this tightening cycle until there is clear evidence that inflation is on a downward trend.

“We are in this for as long as it takes to get inflation down,” Fed Vice Chair Lael Brainard recently told a banking conference.

Speaking at a conference in Vienna last week, Fed Governor Chris Waller thinks the benchmark policy interest rate will need to climb above 4 percent if inflation fails to moderate. Despite the slower growth in the CPI and personal consumption expenditures (PCE) price index, Waller believes inflation remains “too elevated.”

“Inflation is widespread, driven by strong demand that has only begun to moderate, by an ongoing lag in labor force participation and by supply chain problems that may be improving in some areas but are still considerable,” he said in prepared remarks.

“Reducing inflation is likely to require a sustained period of below-trend growth,” Powell said. “While higher interest rates, slower growth, and softer labor market conditions will bring down inflation, they will also bring some pain to households and businesses. These are the unfortunate costs of reducing inflation. But a failure to restore price stability would mean far greater pain.”

While the Fed acknowledged that it cannot address the supply side of the current inflationary environment, the institution’s leaders are targeting the demand portion of 40-year high inflation. This is already being seen in the U.S. real estate market, which industry observers aver has slipped into a recession.

Jason Brady, the president and CEO of Thornburg Investment Management, agrees that the Fed is unlikely to reverse its hawkish tightening, even if it results in an economic downturn.

“The Fed began gambling with the economy after adjusting their framework a few years ago. They realize now that they lost the script and as market participants, we’re paying for this gamble as the Fed works to get inflation under control. We shouldn’t lose sight of the fact that we’re in the middle of a Fed gamble—a bet that they lost,” he wrote in a research note. “I think the Fed is much more likely to remain aggressive about fighting inflation than collapsing under the weight of economic pain.”

According to the CME FedWatch Tool, most of the market widely expects the central bank to pull the trigger on a 75-basis-point rate hike at this month’s Federal Open Market Committee (FOMC) policy meeting.

If this happens, investors can most likely expect a half-point increase at the next rate-setting Committee policy meeting, notes Ipek Ozkardeskaya, a senior market analyst at Swissquote Bank.