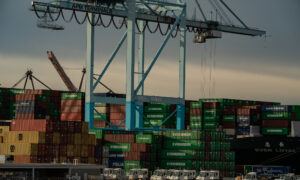 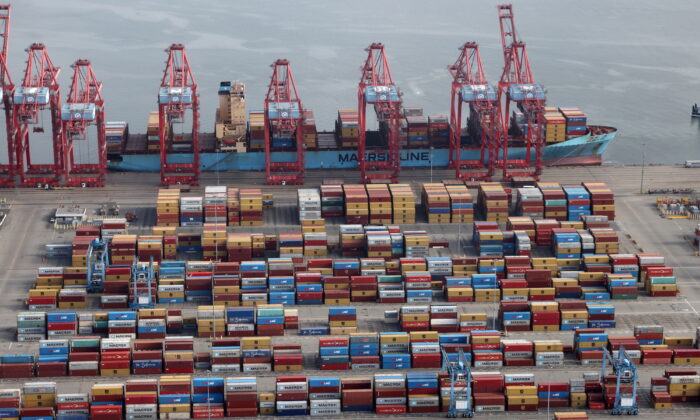 Shipping containers are unloaded from a ship at a container terminal at the Port of Long Beach-Port of Los Angeles complex on April 7, 2021. (Lucy Nicholson/File Photo/Reuters)
Economies

US Industrial Production Rebounds to Above Pre-Pandemic Level

A new report from the Federal Reserve shows that U.S. factory production expanded in August, though at a far slower pace than in July, due to disruptions related to Hurricane Ida. Still, total industrial production in August rose above its pre-pandemic level.

After growing by 0.8 percent in July, overall U.S. industrial production expanded by 0.4 percent in August, the Fed said in a Sept. 15 statement (pdf).

“Late-month shutdowns related to Hurricane Ida held down the gain in industrial production by an estimated 0.3 percentage point,” the Fed stated in the report.

Over the year, factory production has advanced by 5.9 percent, rising to 0.3 percent above its pre-pandemic February 2020 level.

Utilities saw the biggest gains, expanding by 3.3 percent in August after contracting by 4.0 percent in July. Consumer goods, the category with the next highest rate of expansion, rose by 0.8 percent, followed by nonindustrial supplies, which advanced by 0.6 percent in August.

While the hurricane forced plant closures for petrochemicals, petroleum refining, and plastic resins, manufacturing managed to grow by 0.2 percent. Economists polled by Reuters expected a reading of 0.4 percent.

“Despite an estimated drag of 0.2 percentage point due to Hurricane Ida, manufacturing output increased 0.2 percent in August and was 1.0 percent above its pre-pandemic level,” the Fed stated in the report.

A separate report from the New York Fed, known as the “Empire State” index on current business conditions, rose to a reading of 34.3 in September from 18.3 in August.

New orders, shipments, and unfilled orders all recorded substantial increases, while labor market indicators pointed to strong employment growth. In particular, the average employee workweek measure surged by 15.4 points in September to a reading of 24.3.

Supply-side challenges remained, however, with the delivery times index hitting 36.5—a record high.

“However steadfast supply chain and hiring challenges will concurrently limit the expansion, and these headwinds won’t diminish significantly until the COVID crisis is effectively contained at home and abroad.”

Inflationary pressures remained, with the prices paid index close to a record level and the prices received measure coming in at an all-time high of 47.8.

“Looking ahead, firms remained very optimistic that conditions would improve over the next six months, and capital spending and technology spending plans increased markedly,” the authors of the report wrote.