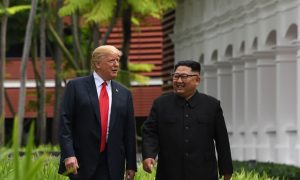 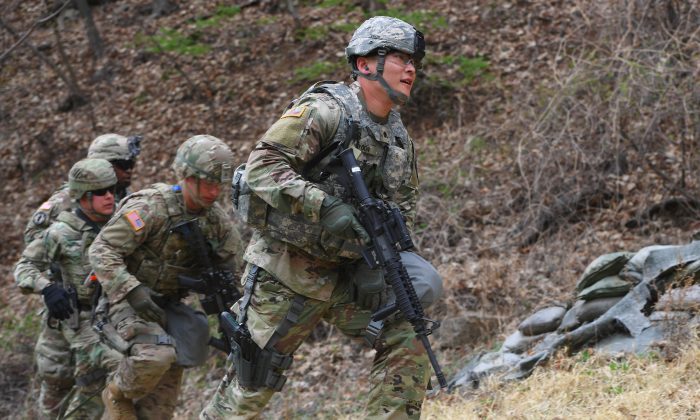 WASHINGTON—According to the commanders of the U.S. Indo-Pacific Command and U.S. Forces Korea, China continues to grow as a threat and seeks to challenge the global status quo; Russia plays the role of “spoiler”; and tensions between North and South Korea have lessened dramatically, but with no verifiable change to actual North Korean military capabilities.

The commanders testified before the Senate Armed Services Committee on Feb. 12. Chairman James Inhofe (R-Okla.) opened the hearing by stating the need for “urgent change at significant scale to address … the strategic competition with China.” He also observed that with deterrence eroding as China advances its military capabilities, Beijing may conclude it can achieve its goals by force.

The ranking member of the committee, Sen. Jack Reed (D-R.I.) expressed his belief that the present level of progress in negotiations with North Korea on its nuclear program didn’t justify the reduction in readiness that he believed the suspension in U.S. military exercises with the South Koreans would produce. (Planned U.S.-South Korean exercises were suspended last year as a result of President Donald Trump’s summit in Singapore with North Korean President Kim Jong Un.)

“China represents our greatest long-term strategic threat to a free and open Indo-Pacific and to the United States,” U.S. Indo-Pacific Commander Adm. Philip S. Davidson said. China has greatly advanced its capability “in all domains,” including multiple generations of new fighters, the deployment of hundreds of satellites, and advanced ships and submarines, eroding the U.S.’s military advantage in the process.

Davidson also emphasized the Chinese commitment to “expand its form of ideology” to “create a new order, one with ‘Chinese characteristics,’ led by China”—an outcome that “displaces the stability and peace of the Indo-Pacific that has endured for over 70 years.”

Russia “regularly plays the role of a spoiler” in the region, “seeking to undermine U.S. interests and impose additional costs on the United States and our allies whenever and wherever possible,” Davidson said. These activities include cyber disruption and disinformation, such as Moscow has employed in Ukraine and elsewhere in Europe.

Terrorism and natural disaster also raise significant national-security concerns. Davidson pointed out that the Indo-Pacific region is the most disaster-prone region of the world, and illustrated the enduring terror threat by citing the capture by ISIS of Marawi, Philippines, in 2017.

Gen. Robert B. Abrams, commander of U.S. Forces Korea, noted that while it’s been 440 days since the last “strategic provocation” by North Korea, he remains “clear-eyed” and had “not observed activity consistent with a full-court press on denuclearization.”

He repeatedly emphasized the “reduction of tension” on the Korean Peninsula, which had extended benefits in allowing for “nascent confidence-building measures,” decreased chances of mistakes or miscalculation on either side, and the creation of “space for negotiations” on the North Korean nuclear program.

In answer to questions from Reed and other senators about the state of readiness of U.S. forces in Korea, Abrams pointed out that operations and exercises, beyond those canceled after last year’s Singapore summit, do continue. Under questioning from Sen. Tom Cotton (R-Ark.), Abrams noted particularly that there would be no difference to training levels below the battalion command level, and that commanders above that level were proficient in their training, based on their previous commands.

Both commanders stressed the importance of “on-time budgets” and the relief from budget caps under the Budget Control Act of 2011. To meet the National Defense Strategy, Davidson said “there’s going to be requirements for investments across all domains,” and stressed that maintaining the on-time budgets is crucial to regaining both qualitative and quantitative advantage with respect to China.