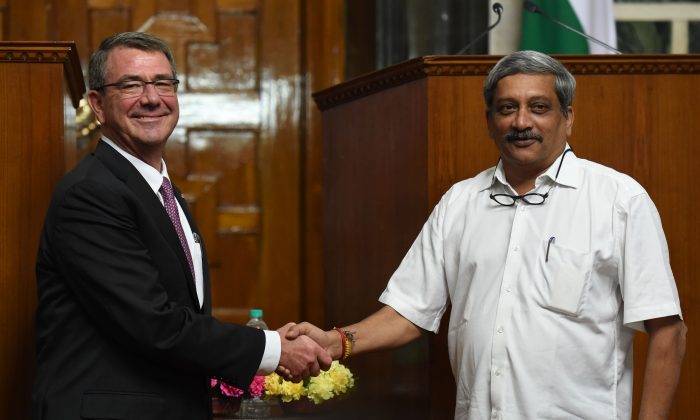 U.S. Secretary of Defense Ash Carter hailed his recent India visit as the most significant part of his tour—he also visited the Philippines, Saudi Arabia, and the United Arab Emirates—because U.S.-India defense cooperation, in his view, is a “win-win” situation.

Carter predicted that the U.S.-India relationship is “destined to be one of the most significant partnerships of the 21st century,” adding “I’ve seen a remarkable convergence of U.S. and Indian interests, what I call a strategic handshake.”

He had made these comments at the Council on Foreign Relations (CFR) in New York before the tour. The meeting, which took place April 10 to 12, indeed promised a continuance of this significant “strategic handshake,” but some key concerns remain to be resolved before a strong partnership can be forged.

The new bonds between the United States and India were reflected in the Joint Strategic Vision Statement that President Barack Obama and Indian Prime Minister Narendra Modi released last January, and also in the 2015 framework for the U.S.-India defense relationship, which Indian Defense Minister Manohar Parrikar and Carter signed last year in Delhi.

The defense framework will serve as a basis for the U.S.-India defense relationship for the next decade.

Carter’s tightly-packed schedule of meetings with his Indian hosts included talks on producing Apache and Chinook helicopters in India as well as a new joint production platform with U.S. defense manufacturer Lockheed Martin. This follows on the success of the C-130J Super Hercules contract, the first major military contract between the United States and Indian in decades; India was among the first operators of the C-130J aircraft.

The intensification of bilateral strategic and technological interests has been accompanied by the strengthening of military-to-military ties.

India participates in major joint exercises like Red Flag, the U.S. Air Force-hosted aerial combat training exercise where all top pilots, and those from countries like India, train together. India also participates in the Rim of the Pacific Exercise (RIMPAC), “the world’s largest international maritime exercise,” as Carter called it.

Then there is also the trilateral Malabar exercise, in which Japan, India, and the United States operate together at sea in such critical training as air defense and anti-submarine warfare.

U.S.-India ties today are a far cry from the old relationship dictated by cold-war imperatives.

U.S.-India ties today are a far cry from the old relationship dictated by cold-war imperatives.

Carter played down the traces of mutual suspicion between the two sides, saying that these were surmountable and historic in character rather than springing from today’s logic. The United States and India, since the dawn of India’s independence 50 years ago, have essentially lived apart.

India pursued a nonalignment policy in the Cold War. “They wouldn’t do with us the kinds of things that we’re doing today—together today,” he explained, referring to India’s former dependence on the military technology provided by the Soviet Union.

Carter pointed out that there was “no difficulty in principle either with the idea, in our minds, that India is an enduring partner, or in their minds their willingness to work with us, although in a way that retains their independence, which is important.”

Besides the bonhomie between Carter and his host Parrikar, the two sides achieved progress in some logistics- and technology-sharing programs but fell short on other key issues, including co-development of a future Indian aircraft carrier.

The two sides achieved progress in some logistics- and technology-sharing programs but fell short on other key issues.

Common policies will make it easier for joint military exercises to proceed without new negotiations each time; a memorandum of understanding is expected to be finalized in the coming weeks.

The two sides also came to an agreement on other projects included under a U.S.-India Technology Initiative Carter established last June. These include a project to share technology on digital mounted-helmet displays and biological tactical detection systems, which warn of and test for biological warfare agents.

The helmet technology is a key component of India’s stated desire to obtain advanced fighter jets, while the detection system could assist India’s counterterrorism efforts.

But India has been cautious about rushing into a more binding relationship with the United States. With closer military ties strengthened only in recent years, the two nations may be slowly learning how to converge strategically.

The two sides also could not reach consensus on sharing catapult launch technology, one of the critical pieces of equipment needed by India to move ahead to acquire another carrier, which it plans to add to its fleet of two by 2028. However, the two sides plan future rounds of discussion on the carrier technology.

Both sides see the carrier as a vital addition, given the threats emanating from China’s belligerence in the South China Sea where Beijing is militarizing new man-made islands.

But Indian politicians and strategists told Carter they were concerned over Washington’s delivery of F-16 fighter jets to Pakistan, where the hawks often refer to India as a “sworn enemy.”

Recently, the United States approved the sale of eight F-16 fighter jets to Pakistan, a transaction purporting to enhance Pakistan’s counterterrorism capability. By Indian calculations, however, this sizable force of fighter jets appeared disproportionate for the fight against terrorism.

Also, these planes are not suitable for hitting terrorist hideouts and other narrow targets, and can be used for attacking a “bigger enemy”—meaning India.

“Pakistan has committed aggression against India in four wars, using U.S. arms and equipment,” said one analyst in a casual conversation after the talk at the CFR. “It would be naive to assume that the U.S.-supplied weapons will not be used against India. Or is Washington playing a double game by selling arms to both sides?”

The supply of F-16 jets to Pakistan has caused trepidation in India.

Another concern is the existence of anti-India terrorist elements operating from Pakistani soil. Pakistan, India says, has begun cracking down only on terrorist elements hostile to Pakistan but allows full freedom to those that operate against India.

The United States needs to address India’s security concerns if it wants to achieve the much-touted “win-win” relationship with India. Until then, a promising—and mutually beneficial—long-term relationship will move at a snail pace.