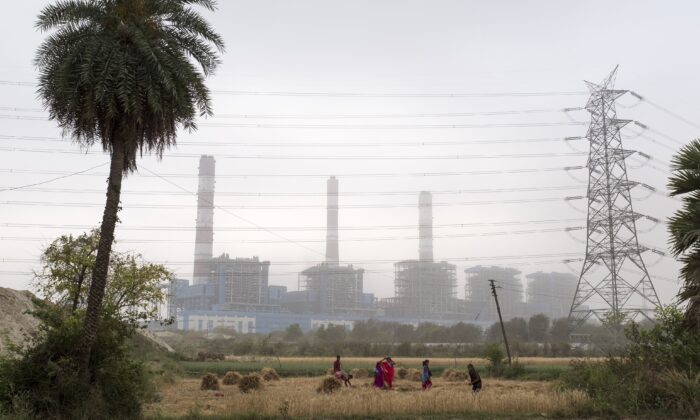 Indian villagers harvest a field of cereal crops near the Barh Super Thermal Power Station in Barh, in the Indian state of Bihar on April 6, 2019. (Xavier Galiana/AFP via Getty Images)
Economy

According to Brouillette, the meeting that convened between the United States and India reflected both countries’ resolve to place energy development at the center of their relationship, as both nations seek to quickly emerge from the pandemic crisis to a position of strength.

“It helps to have a common perspective on energy,” Brouillette said in a statement. “The United States and India share a bedrock belief that there is no distinction between ‘good’ and ‘bad’ energy. We are committed to deploying every energy fuel and technology at our disposal.”

Brouillette said that this mutual understanding opened up a wide range of opportunities for collaboration.

The U.S.–Indian partnership was born when President Donald Trump met with Indian Prime Minister Narendra Modi at a summit in June, 2017, where the leaders recognized the importance of energy to the progress of both nations. At the direction of the two leaders, India’s Department of Energy and the Ministry of Petroleum and Natural Gas set up the SEP in 2018. This cooperation was also instrumental in forming the overarching U.S.–India Comprehensive Global Strategic Partnership in February.

The energy partnership rests on the four pillars of oil and gas, power and energy efficiency, renewable energy, and sustainable growth. The two nations also agreed to continue their research and development efforts on smart grids, energy storage, and civil nuclear technology, while introducing new research measures in advanced coal technologies and in the development of hydrogen-fueled energy solutions.

Brouillette said that the United States and India are exploring opportunities for cooperation in oil and gas development and trade. Led by industry, the U.S.–India Gas Task Force is working on expanding India’s gas sector, which will benefit exporters of American liquefied natural gas (LNG).

Pradhan has also said that his government is taking steps to transform India to a gas-based energy system. The SEP will help promote natural gas as an on-demand energy source that will help the second-most populous country meet its growing need for energy. In addition, India’s gas grid must be developed, along with LNG import infrastructure.

Shale oil and gas resources should also be developed, according to the SEP, while Brouillette and Pradhan also signed a memorandum of understanding on developing a strategic petroleum reserve for India—part of which could involve India using U.S. Strategic Petroleum Reserve storage capacity to buffer crude oil.

Today India’s @PetroleumMin signed an MOU with @Energy on cooperation on Strategic Petroleum Reserves. This will bolster global #EnergySecurity and facilitate technical cooperation on oil stockpile management and emergency response.

Meanwhile, India’s power grid is in need of modernization, with the SEP focusing on secure and efficient power distribution systems. As India currently produces most of its energy from coal, the SEP will also facilitate making power generation at existing plants more flexible, more efficient, and cleaner. Improving the energy efficiency of buildings will also be a priority, while the SEP will assist in the deployment of affordable renewable energy.

According to the International Energy Agency (IEA), India’s population of 1.36 billion and its rapid economic growth in recent years have fueled a corresponding increase in demand for energy. Trends such as urbanization and a growing manufacturing sector are driving demand for fuel and electricity, with up to three quarters of India’s electrical power produced from coal. The IEA says that coal is also set to remain India’s main source of energy.

India doubled the share of solar and wind in its energy portfolio (from 4 to 8 percent) since 2016. A big factor in improving human health in India is the country’s prioritization of enabling access to electricity and clean sources of energy for cooking, such as bottled gas. Traditionally, many rural Indians have relied on firewood or dung as fuel for cooking, contributing to poor respiratory health.

According to the IEA, some 700 million people have gained access to sources of electricity since 2000, while 80 million connections to LPG pipelines have been made to facilitate cleaner cooking.

The U.S. energy secretary said in a statement that he was excited about increasing energy trade between the two nations.