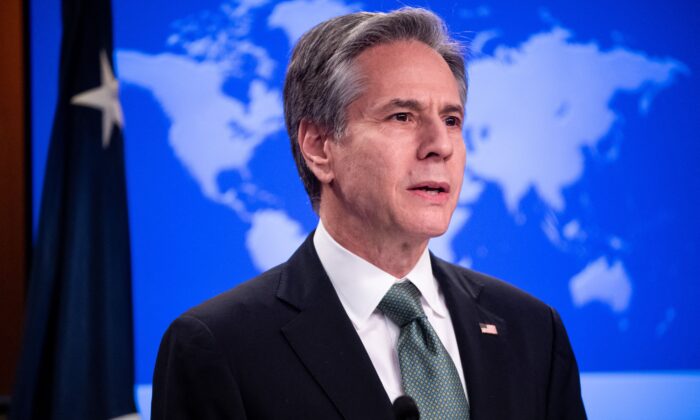 Secretary of State Antony Blinken speaks to the press about the war in Ukraine, at the State Department in Washington, on March 17, 2022. (Saul Loeb/Pool/AFP via Getty Images)
By Michael Washburn

The United States on March 21 announced the imposing of visa restrictions on Chinese officials responsible for “repressive acts” against ethnic and religious minorities inside China and abroad, including the United States.

The restrictions would bar Chinese officials involved in the persecution of various victim groups from traveling to the United States.

“The United States rejects efforts by [Chinese] officials to harass, intimidate, surveil, and abduct members of ethnic and religious minority groups, including those who seek safety abroad, and U.S. citizens who speak out on behalf of these vulnerable populations,” U.S. Secretary of State Antony Blinken said in a statement.

“We are committed to defending human rights around the world and will continue to use all diplomatic and economic measures to promote accountability.”

Blinken said sanctions would be imposed on those who “are believed to be responsible for, or complicit in, policies or actions aimed at repressing” religious believers, ethnic minorities, journalists, labor organizers, human rights activists, dissidents, and peaceful protestors in China and abroad.

The statement didn’t specify who would be targeted or how many were subjected to the new restrictions. A State Department spokesperson, in response to an inquiry from The Epoch Times, said that “individual visa records are confidential and we cannot provide details as to who is or will be affected.”

The State Department, under both the Trump and Biden administrations, have previously slapped sanctions on Chinese officials involved in various abuses, including the regime’s clampdown in Hong Kong, the persecution of the spiritual group Falun Gong, and the oppression of Uyghurs in Xinjiang.

Last May, the Biden administration sanctioned Yu Hui, a former director of an agency charged with persecuting Falun Gong in the southwestern Chinese city of Chengdu, barring him and his immediate family from entering the United States.

Falun Gong practitioners arrested under Yu’s watch include Pan Xiaojiang, a judicial assistant at an intermediate court in Sichuan Province, where Chengdu is the capital.

Pan was arrested from her home after hanging a banner aimed at raising awareness about Beijing’s persecution of her belief and sentenced to four years in prison. Two others arrested with her, including a graduate student, were each sentenced to two years in jail. About a dozen police cars surrounded the court during her court appearance, according to Minghui, a U.S.-based website that has been tracking the persecution.

The new measures come less than a week after the Department of Justice (DOJ) announced charges against five individuals alleged to be involved in wide-ranging schemes to spy on, intimidate, and harass ethnic Chinese dissidents based in the United States. Their alleged crimes formed part of the communist Chinese regime’s expansive campaign of “transnational repression,” DOJ officials said.

Blinken also demanded that the Chinese regime stop carrying out its transnational repression, such as endeavoring to silence Uyghur American activists and others by denying their families in China the ability to leave the country.

“The United States reaffirms its support for those who bravely speak out despite the threat of retaliation,” the secretary of state said.

“We call on the PRC [People’s Republic of China] government to end its ongoing genocide and crimes against humanity in Xinjiang, repressive policies in Tibet, crackdown on fundamental freedoms in Hong Kong, and human rights violations and abuses, including violations of religious freedom, elsewhere in the country.”