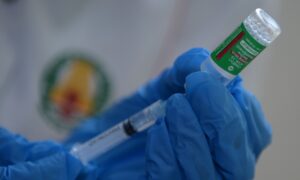 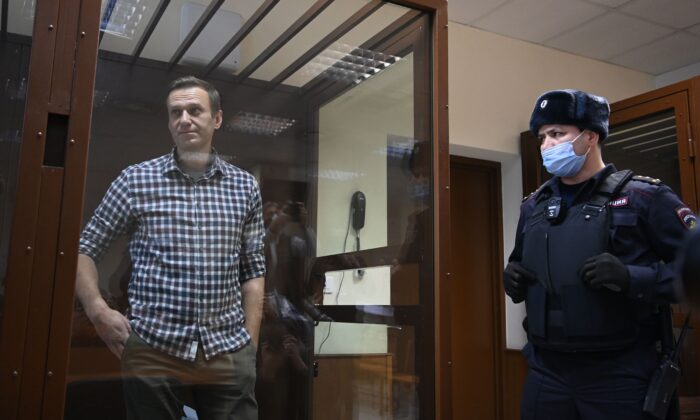 Russian opposition leader Alexei Navalny stands inside a glass cell during a court hearing at the Babushkinsky district court in Moscow on Feb. 20, 2021. (Kirill Kudryavtsev/AFP via Getty Images)
International

US Imposes Sanctions on Russia Over Navalny Poisoning

The United States has imposed sanctions on Russian individuals and entities over the Kremlin’s attempt to kill opposition figure Alexei Navalny with a nerve agent, according to senior Biden administration officials.

On March 2, the U.S. Department of the Treasury’s Office of Foreign Assets Control (OFAC) joined the U.S. departments of State and Commerce in sanctioning seven Russian government officials.

“The Kremlin’s use of chemical weapons to silence a political opponent and intimidate others demonstrates its flagrant disregard for international norms,” Treasury Secretary Janet L. Yellen said in a statement. “We join the EU in condemning Alexei Navalny’s poisoning as well as his arrest and imprisonment by the Russian government.”

The moves are being taken in coordination with the European Union, officials told reporters on a conference call. The officials also repeated President Joe Biden’s call for Russia to release Navalny from prison. Russia has denied attempting to assassinate Navalny, who was arrested on Jan. 17 after flying back to Russia from Germany, where he had been recovering from last summer’s poisoning.

“The United States is neither seeking to reset our relations with Russia, nor are we seeking to escalate,” one official said on the call.

“We believe that the United States and our partners must be clear and impose costs when Russia’s behavior crosses boundaries that are respected by responsible nations, and we believe there should be guard rails on how these adversarial aspects of our relationship play out,” the official said.

Weeks after his arrest, a court sentenced Navalny to more than 2 1/2 years in prison on charges that he violated the terms of his probation while recovering in Germany.

Navalny, a prominent critic of President Vladimir Putin, has a YouTube channel in which he posts videos criticizing Putin and Russian corruption that have racked up millions of views.

At a press briefing last week, a reporter asked if the White House believes tensions with Russia are increasing, citing announcements from the Kremlin that it was going to redouble its efforts on opposing foreign powers.

“Over the last several years, there have been more concerning steps that have been taken by Vladimir Putin and by members of the Kremlin, as the president has expressed and expressed during the campaign,” White House press secretary Jen Psaki told reporters on Feb. 24.

“The president also spoke with President Putin just maybe two weeks ago, and did not hold back in expressing his concerns about the actions of his government,” she added. “But we are letting that process see itself through. As I noted yesterday, it will be weeks, not months, before it’s concluded and we have more details about a response.”

Biden spoke with Putin in a call on Jan. 26, in which they “discussed both countries’ willingness to extend New START for five years, agreeing to have their teams work urgently to complete the extension,” according to a readout of the call. He also raised other issues “including the SolarWinds hack, reports of Russia placing bounties on United States soldiers in Afghanistan, interference in the 2020 United States election, and the poisoning of Aleksey Navalny.”

Russia said in February that it’s prepared to split with the European Union if the EU imposes new crippling sanctions over Navalny. Foreign Minister Sergey Lavrov said in televised remarks that Russia doesn’t want to be isolated but must increase its self-sufficiency to face potential EU sanctions.

“We don’t want to be isolated from international life, but we must be ready for that,” Lavrov said. “If you want peace, you must prepare for war.”

Asked if Russia is heading toward a split with the European Union, Lavrov replied, “We proceed from the assumption that we are ready for that.”

After the arrest of Navalny, Secretary of State Antony Blinken sharply criticized the country, telling NBC News on Feb. 1 that he was “deeply disturbed by the violent crackdown” on Russian protesters demanding his release. More than 5,300 people were reportedly detained.