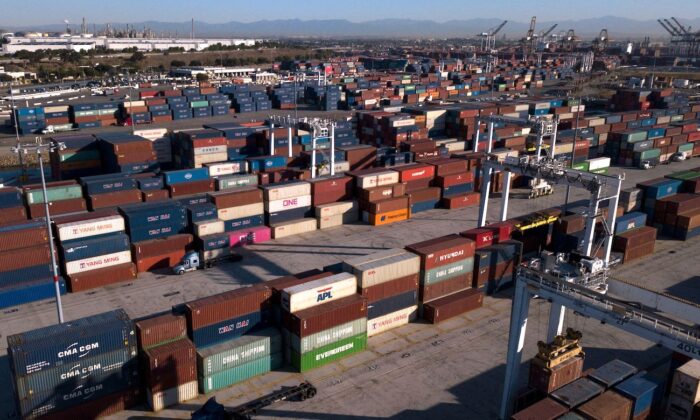 US Import, Export Prices Surge in October, Adding to Signs of Persistent Inflation

The prices of U.S. imports and exports surged in October, adding to signs that the current bout of inflation, which Federal Reserve policymakers and Biden administration officials say is “transitory,” could prove to be considerably more persistent.

Export prices, too, saw a sharp run-up, growing 1.5 percent over the month and 18 percent over the year, with the latter being the largest 12-month increase in the history of the series, which dates back to 1983.

While the import and export price indexes reflect inflationary trends in internationally traded products, they offer insight into the broader theme of inflation, which has become a key issue for many Americans and a political problem for the Biden administration.

Republican lawmakers on the Joint Economic Committee released an analysis on Nov. 15 to illustrate that inflation is hitting lower-income families the hardest.

“Inflation is a defining piece of the post-COVID economic recovery,” said Jackie Benson, senior economist for Republicans on the Joint Economic Committee. “While much of the conversation has focused on whether today’s rising prices are transitory or permanent (it is actually a mix of both), less attention has been paid to how inflation is affecting our economic recovery and American families’ livelihoods.

“Inflation is at a 30-year high, yet the Biden administration and Congressional Democrats want to blow past all the warning signs and pour trillions more into government programs,” Sen. John Boozman (R-Ark.) said on Twitter.

“Our economy, and American families, will continue to suffer under this reckless tax-and-spend agenda,” Boozman wrote. “Build Back Better will make inflation worse.”

Biden administration officials disagree, arguing that the spending packages will have an anti-inflationary impact.

White House press secretary Jen Psaki told reporters at a recent briefing that “economists across the board” agree that Biden’s infrastructure bill and his Build Back Better agenda “will ease inflationary pressure over the long term.”

The president was presumably referring to an open letter (pdf) signed by more than a dozen Nobel laureates backing his economic agenda, arguing that “it will ease longer-term inflationary pressures” because “it invests in long-term economic capacity and will enhance the ability of more Americans to participate productively in the economy.”

Psaki, in the Nov. 12 briefing, accused Republicans of “screaming about inflation” and using the issue as a “political cudgel,” while being uncooperative in searching for a solution to the problem, which she argued should come in the form of backing Biden’s big-ticket spending plans.