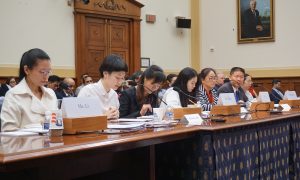 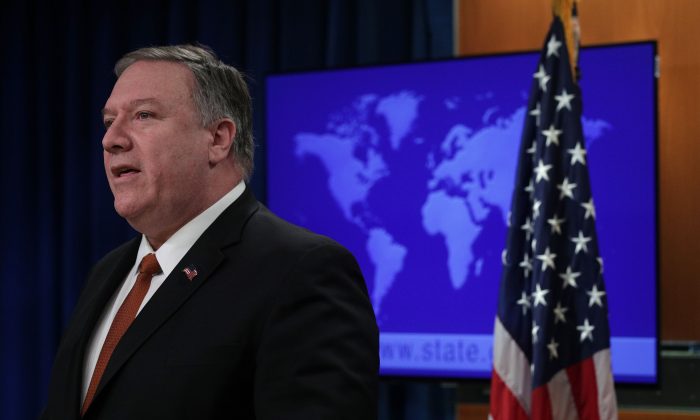 U.S. Secretary of State Mike Pompeo speaks on the release of the 2018 Country Reports on Human Rights Practices in the press briefing room of the State Department in Washington on March 13, 2019. (Alex Wong/Getty Images)
US News

WASHINGTON—The State Department’s annual Country Reports on Human Rights Practices, released on March 13, highlighted China as one of the worst human rights abusers and may have signaled there will be a future investigation of forced organ harvesting in the country.

Presenting the report at the State Department, Secretary of State Mike Pompeo said China was in “a league of its own when it comes to human rights violations.”

“In just 2018, China intensified its campaign of detaining Muslim minority groups at record levels. Today, more than one million Uyghurs, ethnic Kazakhs, and other Muslims are interned in re-education camps designed to erase their religious and ethnic identities,” he said.

Ambassador Michael Kozak of the Bureau of Democracy, Human Rights, and Labor, said at a press conference on March 13 at the Foreign Press Center, “From Xinjiang, where you’ve got hundreds of thousands or millions of people in camps, to the treatment of Falun Gong, to house churches, you go across the board. The situation in China has not gotten better, it’s gotten a lot worse over the last several years. “

Kozak said, “We do raise these issues with the Chinese authorities when we see them…what we are trying to do is just raise the level of attention to these issues.”

Kozak believes that international pressure “does have some effect.” In the case of Xinjiang, the Chinese authorities changed their position from denying the existence of the “re-education camps” to admitting it, although they then claimed that they are “vocational training camps.”

The report also identified the issue of organ harvesting in China, about which the House of Representatives unanimously passed Resolution 343 in June 2016, “expressing concern regarding persistent and credible reports of systematic, state-sanctioned organ harvesting from non-consenting prisoners of conscience in the People’s Republic of China, including from large numbers of Falun Gong practitioners and members of other religious and ethnic minority groups.”

The report says, “Some activists and organizations continue to accuse the government of involuntarily harvesting organs from prisoners of conscience, especially members of Falun Gong.”

David Matas, international human rights lawyer, co-author of “Bloody Harvest/The Slaughter,” said to The Epoch Times that this is “a noteworthy development.”

“The mention by the Department of State…of reports of organ harvesting of prisoners of conscience, primarily Falun Gong, is an indication of the seriousness with which the reports are taken. “

Matas said, “there is an implicit, albeit belated link, here to the House of Representative’s June 2016 resolution calling for an investigation by the Department of State.”

Among 6 items expressed in House Resolution 343, the 6th one directly addresses the Department of State:

“That the House of Representatives… calls on the United States Department of State to conduct a more detailed analysis on state-sanctioned organ harvesting from non-consenting prisoners of conscience in the annual Human Rights Report, and report annually to Congress on the implementation of section 232 of the Department of State Authorization Act, Fiscal Year 2003 (8 U.S.C. 1182f), barring provision of visas to Chinese and other nationals engaged in coerced organ or bodily tissue transplantation.”

However, journalist and researcher Ethan Gutmann, author of “Losing the New China” and “The Slaughter,” criticized the State Department for “parroting Chinese official assurances of transplant reform while over one million blood-tested Uyghurs are incarcerated in ‘reeducation’ camps.”

David Kilgour, former Canadian secretary of state for Asia-Pacific, co-author of Bloody Harvest/The Slaughter, said: “The United States should advance its concern about the worsening state of human rights across China at every bilateral and multilateral opportunity, just as it did with the Soviet Union in the 1970s and 80s.

“Relinking human rights with trade talks, applying the Magnitsky Act to surgeons and others participating in organ abuse, and warning U.S. universities about the risk of training surgeons from China, and so on, would all help.”

Zhang Erping, spokesperson for Falun Gong, said, “Beijing is perfecting its methods of persecution used against Falun Gong practitioners over the years to suppress other groups lately. China is the only country on earth that spends more money on domestic security than its national defense,” and “The U.S. must stand firm on its moral grounds and protect human rights around the world, China in particular.”

Correction: A previous version of this article misidentified the location where Ambassador Michael Kozak of the Bureau of Democracy, Human Rights, and Labor spoke on March 13. He spoke at the Foreign Press Center. The Epoch Times regrets the error.