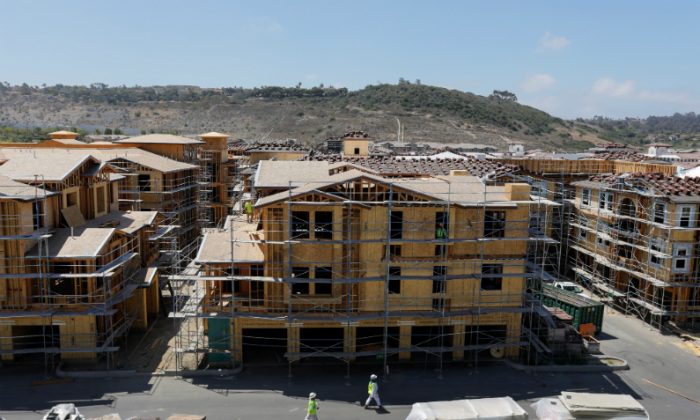 Development and construction continues on a large scale housing project of over 600 homes in Oceanside, California, on June 25, 2018. (Mike Blake/Reuters)
US News

WASHINGTON—U.S. homebuilding rose in October amid a rebound in multi-family housing projects, but construction of single-family homes fell for a second straight month, suggesting the housing market remained mired in weakness as mortgage rates march higher.

Other details of the report published by the Commerce Department on Nov. 20 were also soft. Building permits declined last month and homebuilding completions were the fewest in a year. Housing starts increased 1.5 percent to a seasonally adjusted annual rate of 1.228 million units last month.

“Rising interest rates and rising home prices are creating affordability challenges that are causing buyers to take pause and re-assess their situation,” said Scott Volling, principal at PwC in Atlanta.

The struggling housing market is in stark contrast with the broader economy, which has enjoyed two straight quarters of robust growth and an unemployment rate at a near 49-year low of 3.7 percent. Prolonged housing weakness, together with a relentless sell-off on the stock market could stoke fears over the durability of the economy’s strength.

In addition to rising borrowing costs, the housing market is also being squeezed by land and labor shortages, which have led to tight inventories and more expensive homes. Many workers are being priced out of the market as wage growth has lagged.

The 30-year fixed mortgage rate is hovering at a seven-year high of 4.94 percent, according to data from mortgage finance agency Freddie Mac. Wages rose 3.1 percent in October from a year ago, trailing house price inflation of about 5.5 percent.

Stocks on Wall Street were trading lower on Nov. 20, with the Standard & Poor’s 500 index hitting a three-week low following weak results and forecasts from retailers including Target and Kohl’s Corp., and home improvement chain Lowe’s Cos.

The dollar rebounded from two-week lows against a basket of currencies, while longer-dated U.S. Treasury yields fell.

Residential investment contracted in the first nine months of the year and housing is likely to remain a drag on economic growth in the fourth quarter. Economists expect housing activity to remain weak through the first half of 2019.

Single-family home building, which accounts for the largest share of the housing market, dropped 1.8 percent to a rate of 865,000 units in October after declining in September.

Single-family home building has lost momentum since hitting a pace of 948,000 units last November, which was the strongest in more than 10 years.

A survey on Nov. 19 showed confidence among single-family home builders dropped to a more than two-year low in November, with builders reporting that “customers are taking a pause due to concerns over rising interest rates and home prices.”

Permits to build single-family homes fell 0.6 percent in October to a pace of 849,000 units. These permits remain below the level of single-family starts, suggesting limited scope for a strong pickup in home building.

“Many renters have opted to renew their existing leases because they feel they are priced out of the housing market,” said Mark Vitner, a senior economist at Wells Fargo Securities in Charlotte, N.C. “We could see a bit more strength in apartment starts in coming months.”

The Nov. 20 data also suggested that housing supply is likely to remain tight in the near term. Homebuilding completions in October fell 3.3 percent to a rate of 1.111 million units, the lowest level since September 2017.

Realtors estimate that housing starts and completion rates need to be in a range of 1.5 million to 1.6 million units per month to plug the inventory gap.