US Households Expected to Pay Higher Utility Bills for Decades 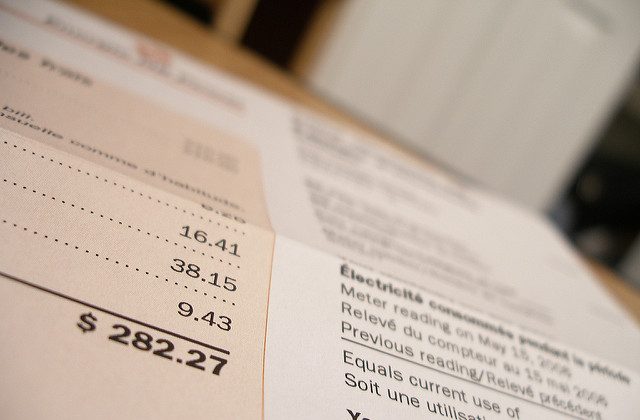 Nevada changed electric billing to allow utilities to triple the monthly charges for people who own solar panels—one of a few state-level battles between utilities and solar providers. (Brendan Wood / CC BY-SA 2.0)
By Andrew Moran

Andrew Moran
Andrew Moran has been writing about business, economics, and finance for more than a decade. He is the author of "The War on Cash."
View profile
and Emel Akan

Utility costs have surged across the nation this year, leaving millions of Americans falling behind on their monthly bills. It might get more challenging as households nationwide can expect to pay higher utility costs for decades to come due to storm recovery bond charges.

Natural disasters have ravaged the United States in recent years, from hurricanes to winter freezes. These weather events have destroyed infrastructure and cost electric and gas utility firms billions of dollars in repairs and maintenance.

Most utility debt has been weather-related as these companies try to strengthen their power grids against fierce storms and harsh conditions. Securitizations or recovery bonds have increased this year, owing primarily to weather-related events in Texas, Oklahoma, and Arkansas in February 2021.

Bond issuers receive the money upfront from investors and repay the loan over time with funds from customers’ monthly bills. Financial experts note that this type of debt securitization can mean a cheaper month-over-month option than conventional financing alternatives, ranging from 1–13 percent of average client bills.

While this has been standard practice since the deregulation efforts in the 1990s, the measure has accelerated over the last several years.

Industry experts note that the enormous debt increase in 2022 was caused by Winter Storm Uri, the significant snow and ice storm and tornado outbreak that left millions of homes without power in Texas in February 2021. The week-long weather event, which was the deadliest winter storm in North America since 1993, had been estimated to cost nearly $200 billion in damages.

Uri also caused the price of electricity and natural gas to spike across multiple states.

According to Joseph Fichera, CEO of Saber Partners, recovery bonds are issued by utilities to finance specific costs (approved by the state legislature and the regulators) incurred as a result of weather-related calamities like hurricanes. They’ve also been used for other costs like rising fuel costs and coal plant retirements. Fichera’s firm provides advisory services to regulators and utilities on securitization deals.

“Financing early coal plant retirements will be a focus in the future,” Fichera told The Epoch Times.

The maximum maturity of these bonds used to be between 10 and 15 years; however, they’re now targeting 25 to nearly 30 years, he said.

“Utilities are spreading it out over a much longer period of time, and that raises policy questions about which generation of customers should be responsible for paying specific costs.”

Experts purport that ratepayer-supported bonds have their advantages and disadvantages. These funding mechanisms can avoid costly bill shocks or lower energy costs amid expensive disasters.

In February, the Railroad Commission of Texas approved a financing order that allowed several utilities, including Atoms Energy, CenterPoint, and Texas Gas Service, to issue customer rate-relief bonds. This would authorize these companies to spread out additional charges for their customers.

“The financing order allows natural gas utilities to spread the high cost of gas incurred during last year’s winter storm across multiple monthly bills rather than having customers face a large spike in one bill. This order is not a windfall for natural gas utilities and is for the benefit of Texas consumers,” the commission stated.

This past summer, the Kansas Corporation Commission let the Kansas Gas Service issue securitized bonds to recover more than $300 million in deferred and carrying costs due to Uri. For the next seven to 10 years, customers would pay a winter event securitized cost of as much as $6.42. Without securitized bonds, households would face monthly charges between $9.04 and $13.90, according to a report from the commission.

At the same time, there have been concerns that the costs are unequal, as households in different parts of the country may pay more over time. Today, five states pay the highest percentage of securitization charges on their monthly bills: New York, Texas, Louisiana, New Hampshire, and Oklahoma.

According to Fichera, utility securitizations provide benefits and are a most cost-effective way to raise funding for utility costs. However, he said, the recent utility recovery bond issues have much higher interest rates than other top-quality, similarly rated corporate bonds, which is unfair to customers.

“Unfortunately, Wall Street underwriters seem to be taking advantage of electricity customers and regulators. These bonds are being priced like riskier A-or BBB-rated securities rather than the pristine AAA securities they are,” he said. AAA-rated bonds are deemed the least likely to default and usually have very low interest rates.

“We estimate that the cost of the overpayments from the past bonds issued in 2022 compared to top-rated corporate bonds is around $1.5 billion to $2 billion,” he said, referring to the higher interest payments over the life of the bond that are passed on to customers in their monthly bills. “That can only be a result of bad marketing and bad negotiations with Wall Street because the bonds have a better credit rating than any other corporate bond.”

Despite efforts to mitigate the financial pain of utility bills, millions of Americans are struggling to keep the lights on and the water running.

The National Energy Assistance Directors Association (NEADA) reported that more than 20 million families were behind on their utility bills. The policy organization also found that the collective amount owed totaled about $16 billion, up from $8.1 billion at the end of 2019. The average delinquent bill increased from $403 to $792.

“The increase in the energy burden for families in the bottom 40 percent of the U.S. income distribution is of even greater concern,” the NEADA noted in a report (pdf). “From 2020 to 2022, families’ average energy costs increased from $3,098 to $3,770, and the amount spent on gasoline increased from $1,035 to $1,662. This increase in utility costs reflects the continued high prices for natural gas, heating oil, and propane, as well as this past summer’s heat waves that increased the cost of air conditioning from an average of $450 the previous summer to about $600.”

A recent LendingTree survey discovered that more than one-third (34 percent) of households struggled to pay for food and medicine because of high utility bills. Twenty-three percent of households couldn’t pay a portion of their energy bill in the past year.

“Life is getting more expensive by the day, and it’s shrinking Americans’ already tiny financial margin for error down to zero,” said LendingTree chief credit analyst Matt Schulz in a statement. “Unless they’ve been able to increase their income, millions of Americans have had to make sacrifices because of inflation to pay the bills. Perhaps the worst part is that inflation likely isn’t going anywhere anytime soon. That means that short-term quick fixes won’t cut it.”

In November, electricity prices increased 13.7 percent year over year, according to the Bureau of Labor Statistics (BLS). Utility piped gas service rose at an annualized rate of 15.5 percent.

The average cost of home heating is forecast to rise 17.2 percent since last winter’s heating season to $1,208, the NEADA stated (pdf).