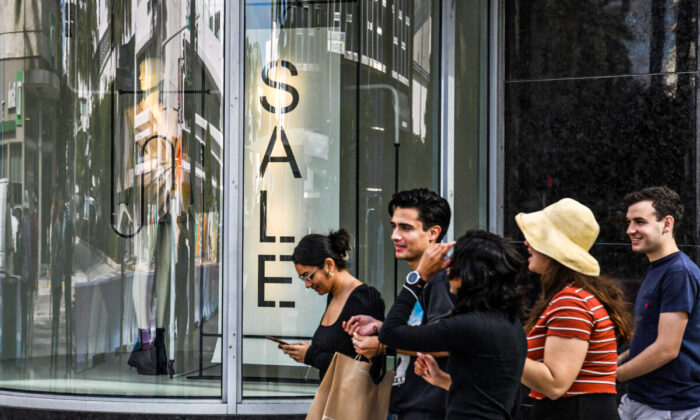 U.S. households will face an average of $5,200 in additional costs in 2022 from a year ago as 40-year high inflation hurts Americans’ wallets, according to a new estimate by Bloomberg Economics.

The top quintile of households will brace for approximately $10,000 in cost pressures, while the bottom quintile will grapple with roughly $2,300 in more inflationary expenses.

More households will be able to withstand the extra $433 per month because of pandemic-era pent-up savings and an increase in wages, economists said in the Bloomberg Economics survey. This could support heightened consumer spending until accumulated cash reserves have been exhausted, they explained.

At the same time, analysts say, rapid depletion of savings may force more people to return to work. This would increase the labor supply and reduce wage growth.

Many Americans anticipate higher inflation over the next year, according to the Federal Reserve Bank of New York’s (FRBNY) Survey of Consumer Expectations in February.

The monthly report highlighted that median one-year-ahead inflation projections rose to 6 percent last month, up from 5.8 percent in January.

The FRBNY’s study also found that households’ current financial situations compared to last year deteriorated, with more respondents stating that they were worse off financially. Moreover, a larger share of study participants conceded that they anticipate their financial conditions to deteriorate in the coming year.

These economic developments have more than half of Americans worried about inflation and the broader economy, making it their top concern.

Gallup’s latest Economic Confidence Index spotlighted that about 80 percent of Americans considered their present economic conditions “only fair” or “poor.”

“Americans have grown more pessimistic about the economy over the past month, with 75 percent now saying conditions are getting worse, up from 70 percent in February and 67 percent in January. Americans’ outlook for the economy is now about tied with the most negative it has been since the early days of the pandemic in April 2020,” Gallup said following its recent poll.

The same survey revealed that 68 percent think inflation is President Joe Biden’s fault, with more laying the blame on the federal government rather than the military conflict between Russia and Ukraine.

In his response to the February consumer price index (CPI) that climbed 7.9 percent, Biden pinned the blame on President Vladimir Putin and his invasion of Ukraine.

“Today’s inflation report is a reminder that Americans‘ budgets are being stretched by price increases and families are starting to feel the impacts of Putin’s price hike. A large contributor to inflation this month was an increase in gas and energy prices as markets reacted to Putin’s aggressive actions,” he said in a statement. “As I have said from the start, there will be costs at home as we impose crippling sanctions in response to Putin’s unprovoked war, but Americans can know this: The costs we are imposing on Putin and his cronies are far more devastating than the costs we are facing.”

Administration officials have regularly rejected the suggestion that it is the White House’s fault for surging price inflation, alluding to the “Putin price hike” on multiple occasions.

Office of Management and Budget (OMB) Director Shalanda Young dismissed claims that this is a U.S.-centric problem, telling the House Budget Committee on Wednesday that this is a global trend.

“I’d also point out that inflation is a global trend. Almost every country is seeing inflationary growth,” she said. “What that tells us is that we have a global issue. It’s not one bill, not one country’s specific policies. This is something all major countries are facing coming out of the pandemic.”

However, according to research from the San Francisco Fed Bank, U.S. inflation is now higher than the average rate of inflation across OECD economies.

“[W]e argue that, among other reasons explored by the literature, the sizable fiscal support measures aimed at counteracting the economic collapse due to the COVID-19 pandemic could explain about 3 percentage points of the recent rise in inflation,” analysts at the regional central bank wrote.

But White House officials also contend that this inflationary environment will dissipate soon.

“We do expect inflation to ease this year and into next year,” Council of Economic Advisers Chair Cecilia Rouse told reporters Tuesday following the release of the 2023 federal budget.

Speaking in an interview with CNBC this month, Treasury Secretary Janet Yellen noted that the public will experience another year of “very uncomfortably high” inflation and “uncertainty.”

Yellen had initially rejected inflation claims last year, before confessing that her revised expectations of transitory inflation were incorrect.

The March CPI report is anticipated to rise to 8.41 percent, according to the Fed Cleveland Bank’s Nowcast.

If crude oil continues to trade above $100 a barrel and the Commodity Research Bureau Food Index rises 35 percent from last year, it would add 1.3 percentage points to the CPI this year, Wells Fargo estimated in a research note earlier this month.

Evercore ISI warned that meat and poultry prices are widely anticipated to soar this year amid higher feed costs. The protein inflation note forecast that the first half of 2022 could see chicken prices spike 70 percent and pork and chicken swell 20 percent. At the same time, steak prices could moderate, while chicken wings and ribeye could decline by about 15 percent.

A recent Bloomberg survey of economists found that the average annual CPI is expected to balloon 5.1 percent in 2022, up from 4.7 percent last year.