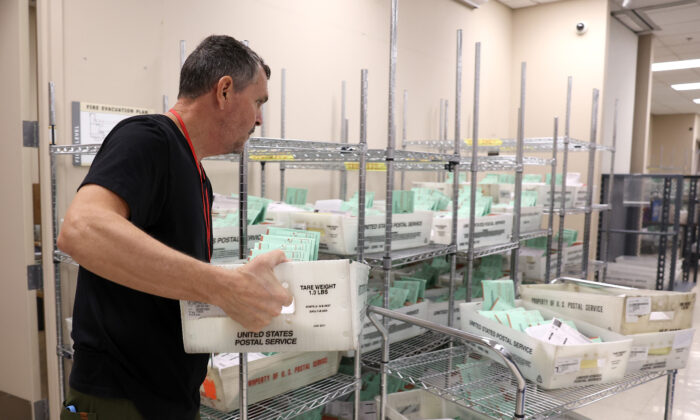 An election worker carries trays filled with mail in ballots to open and verify at the Maricopa County Tabulation and Election Center in Phoenix, Ariz., on Nov. 11, 2022. (Justin Sullivan/Getty Images)
By Jack Phillips

An Arizona county’s refusal to certify the results of the Nov. 8 election might cost Republicans a seat in the U.S. House of Representatives, although one county supervisor said it likely won’t come to that.

As of Dec. 1, Cochise County hasn’t certified its results, drawing a lawsuit from Secretary of State and Democratic gubernatorial candidate Katie Hobbs. On Nov. 28, the Cochise County Board of Supervisors voted 2–1 against certifying the results after one member said it was to protest against reported voting issues in Maricopa County.

The board stated that it would hold a second meeting to vote on certification on Dec. 2 and discuss election issues. It isn’t clear what would happen if officials don’t certify the Nov. 8 results, although it’s likely the courts would then step in.

About 47,000 votes were cast in Cochise, a predominantly rural county located along the U.S.–Mexico border. In the county, Ciscomani leads Engel by 13,775 votes.

If Cochise County’s results aren’t certified by the time Hobbs certifies the statewide results on Dec. 5, the vote totals won’t include those 47,000 votes, according to Bloomberg.

Hobbs said in the suit against Cochise County that the county is allegedly violating Arizona state law and claimed that it may “potentially disenfranchise the voters of Cochise County.” A court needs to intervene or Hobbs “will have no choice but to complete the statewide canvass by Dec. 8 without Cochise County’s votes included,” the lawsuit states (pdf).

“Thus, the Board’s inaction not only violates the plain language of the statute, but undermines a basic tenet of free and fair elections in this state: ensuring that every Arizonan’s voice is heard,” the lawsuit reads.

However, Cochise County Supervisor Peggy Judd said that “we are gonna certify it,” according to The Daily Beast.

“We’re just trying to get some answers to things about the machines. We full well intend to certify it. Why would we not? You know? So we’re going to, we’re just holding off as long as we can, doing things that are legal for us to do, no matter what they say. It’s so weird, we’ve been kind of dealing with this the whole time,” Judd told the outlet on Nov. 30.

“They keep telling us ‘That’s illegal. You’re gonna go to jail,’ but it hasn’t been so, you know, law is up to interpretation. Only the judge in the end can say.”

The Associated Press last month called the race in favor of Ciscomani, who got 50.7 percent of the votes, while Engel got about 49.3 percent. The AP noted that if Cochise County’s results are excluded, the race could reportedly flip in favor of Engel.

Judd previously told media outlets that the delay in certification was designed to protest against problems that were reported on Election Day in Maricopa County, the state’s most populous county.

On Nov. 8, Maricopa County Supervisor Bill Gates and County Recorder Stephen Richer confirmed that there were issues with tabulation equipment but stressed that those problems were resolved later that day. The Arizona Attorney General’s Office later sent a letter to county officials and demanded answers and information about the incident, which led Maricopa County officials to tell Election Day voters to place ballots in drop-boxes.

Republican gubernatorial candidate Kari Lake filed a lawsuit to obtain information from the county, which voted to certify the election results earlier this week. In a later video, Lake signaled that she wouldn’t concede and that she plans more legal challenges.

Judd told the Daily Beast that she believes she hasn’t broken any state laws, contrary to what Hobbs’s lawsuit claims. She also believes the deadline to extend certification is Dec. 8.

“I don’t wanna go to jail, but we don’t see that happening,” Judd told the outlet. “There are people that are working on things, and I’m giving them a chance to work on things.

“It’s extended till the 8th for the secretary of state and she will get her certification. She just needs to wait. And hopefully, something happens between now and then with these other players. But if it doesn’t, it doesn’t, I’m not gonna let my county’s voters not get counted. It wouldn’t be beneficial to anyone.”

As of Dec. 1, Republicans, who have secured control of the House for 2023, currently hold a seven-seat majority over Democrats in the chamber. Just two races, which are led by Republicans, remain undeclared.