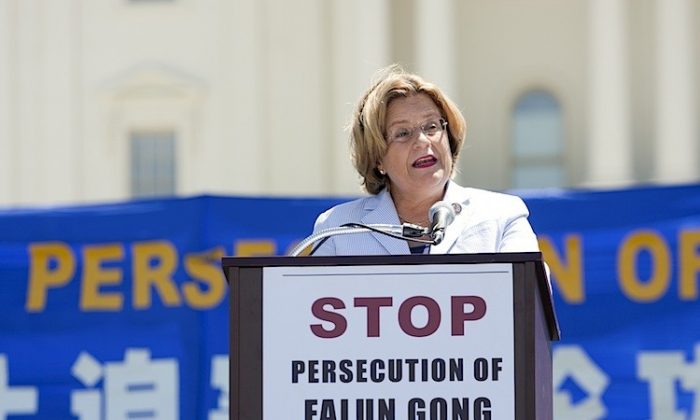 Congresswoman Ileana Ros-Lehtinen (R-Fla), speaking at a rally on the West Lawn of the U.S. Capitol in Washington, DC, Thurs. July 14, 2011, said 'The persecution of Falun Gong must end, and it must end now.' (Shaoshao Chen/Epoch Times)
China

WASHINGTON—Congresswoman Ileana Ros-Lehtinen (R-Fla.) and Rep. Robert Andrews (D-N.J.) introduced House Resolution 281 in the House Committee on Foreign Affairs Thursday that calls on China to immediately stop the practice of organ harvesting from its prisoners, particularly from Falun Gong prisoners of conscience and “members of other religious and ethnic minority groups.”

The resolution calls for: the U.S. government to condemn China’s organ transplantation abuses; an investigation by the Department of State into China’s organ transplant practices and prosecution of those responsible; the end of the 14-year-long persecution of Falun Gong; issuing a travel warning to U.S. citizens traveling to China for transplantation informing them the organs used in their operation may come from prisoners of conscience; condemnation by the U.S. government of China’s organ transplant abuses, banning entry into the United States of individuals who have participated in the unethical removal of human tissues and organs, and prosecuting such persons who may be in the United States.

In the coming days, H. Res. 281 is expected to acquire many co-sponsors. After discussion and possible amendment, the resolution will be voted on in the Foreign Affairs Committee, and if approved, it will go to House Speaker John Boehner who will schedule a vote in the House.

Organ harvesting had been mentioned briefly in H.Res.605, passed in 2010, which called upon China to cease its campaign to persecute and torture Falun Gong practitioners. House Resolution 281 goes much further. In approximately five pages of detailed, explanatory clauses it makes the case that systematic organ transplantation abuse is taking place in China.

The resolution says that “persistent and credible reports of systematic, state-sanctioned organ harvesting from non-consenting prisoners of conscience” is the basis for concern, and then provides a summary of the evidence that links the majority of the organ harvesting with a single-minded campaign to persecute and “eradicate” the practice of Falun Gong that began in July 1999.

The resolution notes that “the number of organ transplant operations in China increased significantly after 1999, corresponding with the onset of the persecution of Falun Gong.”

The resolution says that practitioners were sent to “reeducation-through-labor camps, detention centers, and prisons, where torture and abuse are routine” and where “Falun
Gong prisoners of conscience comprise the majority of the population, and have been said to receive the longest sentences and the worst treatment.”

The resolution also refers to evidence provided by undercover investigators who made phone calls to 17 Chinese hospitals in 2006. Doctors admitted that they used or could obtain vital organs from Falun Gong practitioners. Some implicated the collusion of local courts and police in obtaining the organs.

Transcripts and audio recordings of conversations between undercover investigators and senior Chinese Communist Party officials released in May 2012 by the World Organization to Investigate the Persecution of Falun Gong (WOIPFG) are also referred to by the resolution. The conversations document that several officials “indicated that central authorities were aware of or involved in organ harvesting from Falun Gong prisoners,” says the resolution.

The resolution refers to the findings of investigator Ethan Gutmann, who estimated 65,000 Falun Gong practitioners may have been killed for their organs in the years 2000-2008.

The resolution notes that China’s former vice minister of health admitted that 90 percent of organ transplantations come from executed prisoners. “The practice of sourcing organs from prisoners is a violation of ethical guidelines in medicine,” says the resolution.

Chinese hospitals advertise wait times of 2 to 4 weeks for kidney and liver transplants; heart transplantations have been scheduled with 3 weeks advanced notice, the resolution states. The “short wait times are best explained by the existence of a large pool of living donors whose organs can be harvested on demand,” says the resolution.

The resolution provides a brief summary of the testimony given by Chinese physician “Wang Guoqi in June 2001 before the House of Representatives International Relations Subcommittee on International Organizations and Human Rights. Wang testified that “hospitals in China worked in collusion with state security agencies to extract organs from executed prisoners without written consent of the organ donors, and that these transplants were a lucrative source of income.”