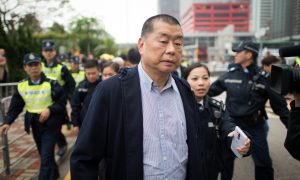 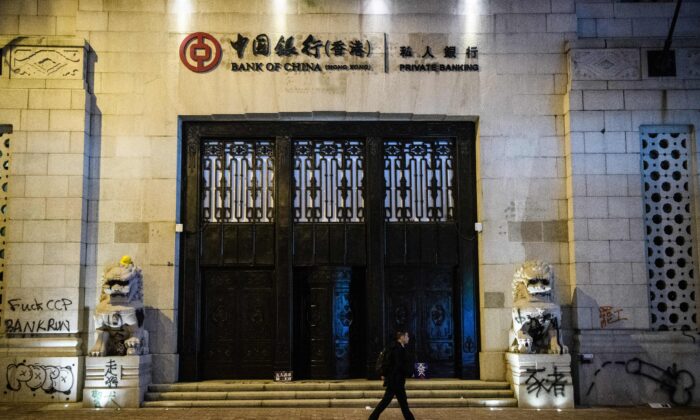 A man walks past graffiti left by protesters on the old Bank of China building following a pro-democracy rally from Victoria Park to Chater Road in Hong Kong on Dec. 8, 2019. (Anthony Wallace/AFP via Getty Images)
US-China Relations

The U.S. House of Representatives on July 1 unanimously passed a bill imposing sanctions on banks doing business with Chinese officials involved in the implementation of the Chinese communist regime’s national security law in Hong Kong.

Passage of the legislation came in response to Beijing’s draconian new law, which came into effect in Hong Kong this week. The standing committee of China’s rubber-stamp legislature, the National People’s Congress (NPC), passed the law on June 30 via ceremonial votes.

The law criminalizes individuals for any acts of subversion, secession, terrorism, and collusion with foreign forces, with maximum penalties of life imprisonment. Critics fear the law will be used to crack down on those critical of the Chinese Communist Party (CCP).

Before the legislation to penalize banks doing business with Chinese officials was passed, House Speaker Nancy Pelosi (D-Calif.) described the law as a “brutal, sweeping crackdown” on Hong Kong.

“The law is a brutal, sweeping crackdown against the people of Hong Kong, intended to destroy the freedoms they were promised,” Pelosi said at a House Foreign Affairs Committee hearing on the situation in Hong Kong.

Concerns have been raised that the legislature breaches Hong Kong’s Basic Law, which guarantees that the International Covenant on Civil and Political Rights can remain in force in the territory.

Under the Sino-British Joint Declaration, which set the terms of Hong Kong’s transfer to Chinese rule in 1997, the regime agreed to grant the city autonomy and freedoms not enjoyed in the mainland, under the formula of “one country, two systems.”

On the first day that the national security law was enforced, the Hong Kong Police Force said it had detained 10 people—six men and four women—on suspicion of violating the security law. In total, about 370 were arrested for a number of offenses, some for “unlawful assembly … obstructing police, and possession of weapons,” officials said.

No one should face life in prison for demonstrating. Now, Hong Kongers are fleeing Hong Kong out of fear for their safety, and we should support their right to do so. We need to impose consequences on the Chinese government for its actions towards #HongKong (2/2)

“No one should face life in prison for demonstrating,” Rep. Brad Sherman (D-Calif.), one of the authors of the legislation, said on Twitter. “Now, Hong Kongers are fleeing Hong Kong out of fear for their safety, and we should support their right to do so. We need to impose consequences on the Chinese government for its actions towards #HongKong.”

Pelosi said in a statement earlier this week that the law’s passage “signals the death” of the “one country, two systems” principle, as she called on the Trump administration to hold the regime accountable by sanctioning CCP officials responsible for abusing rights in Hong Kong under the Global Magnitsky Act and the Hong Kong Human Rights and Democracy Act.

“The purpose of this brutal, sweeping law is to frighten, intimidate, and suppress Hongkongers who are peacefully demanding the freedoms that were promised,” Pelosi said.

The CCP just passed the #HongKong national security law. This is a horrible blow for the freedoms that Hongkongers were promised under the Basic Law. The House must pass @ChrisVanHollen‘s and my Hong Kong Autonomy Act ASAP to hold the CCP accountable.

The Senate last week unanimously approved a companion bill, the Hong Kong Autonomy Act, which would impose mandatory sanctions on individuals or companies that back efforts by China to restrict Hong Kong’s autonomy. The bill, introduced by Sens. Pat Toomey (R-Pa.) and Chris Van Hollen (D-Md.) in the upper chamber, also includes secondary sanctions on banks that do business with anyone found to be backing any crackdown on the territory’s autonomy.