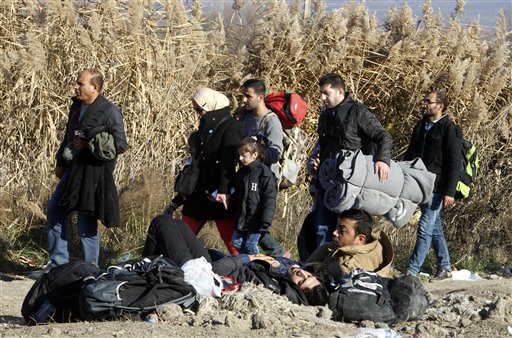 Migrants and refugees walk towards the border with Serbia, while other migrants, who were not allowed to cross into Serbia, lie on the ground awaiting for a solution, near the village of Tabanovce, in northern Macedonia, Thursday, Nov. 19, 2015. (AP Photo/Boris Grdanoski)
Politics

The U.S. House of Representatives overwhelmingly approved on November 19 new legislation that would “pause” the Syria refugee resettlement program until stronger security measures are put in place.

The bigger issue is whether the House and Senate can pass a veto should President Barack Obama follow through on his threat to do so.

The Republican-led legislation passed with 289 votes with 137 opposed, reported the Associated Press.

To override a veto, both chambers have to get two-thirds or more in favor–and the House did so.

The bill now heads to the Senate, where its fate is uncertain. Of the 100 seats in the current (114th) Congress, 54 are Republican and 44 are Democrat. 2 are Independents, who caucus with the Democrats.

There would need to be at least 67 votes to preserve the veto-proof majority, meaning some Democrats would need to join Republicans in voting in favor of the pause.

That’s exactly what happened in the House voting, with 47 Democrats joining in supporting the measure. Out of the current 434 representatives (1 spot is vacant after John Boehner resigned in October), 246 are Republicans and 188 are Democrats.

All but four Republicans voted for the bill. Two of those Republicans, North Carolina Rep. Walter Jones and Iowa Rep. Steve King, voted against it.

While Obama sent officials, including chief of staff Denis McDonough, to try to pressure Democrats to vote against the bill, senior House Democrats said they did not push for rank-and-file members to oppose the bill.

“I’ve said to them from the start, ‘Nobody’s asked you to do anything. Do whatever works for you, for your district,'” House Minority Leader Nancy Pelosi, D-Calif., who opposed the legislation, told journalists.

The Republican-designed legislation includes several new specific measures meant to bolster security and not allow terrorists into the country alongside refugees.

One of the main parts of the bill would require the FBI director to certify a background investigation for each refugee.

It would also require that several top security officials–the heads of FBI and Homeland Security Department and the director of national intelligence–to separately certify that each refugee is not a security threat to the U.S., before any refugee that spent time in Iraq or Syria after March 1, 2011 can be admitted.

The bill comes as fears over terrorists are growing following the Paris terror attacks, especially after it was revealed at least one of the terrorists posed as a Syrian refugee to get into France.

President Barack Obama, though, has dismissed the fears and insisted the current security checks are strong enough.

A recent survey from NBC News found that 56 percent of Americans disapprove allowing more Syrian refugees into the country, while 41 percent approve.

“We have an obligation to protect Americans from those who seek to take advantage of our generosity at the expense of innocent lives,” Rep. Tim Murphy, (R-Penn.), said in a statement after the vote.

“The administration has not provided any details of a thorough screening plan to thwart ISIS infiltration. National security officials told Congress our vetting system lacks the records and resources to identify radical jihadists, so this measure meets a critical national security requirement before we can safely accept refugees from Syria.”

It’s unclear when the Senate will vote on the legislation, though it moved quickly to the House, in about two days after first being publicized.