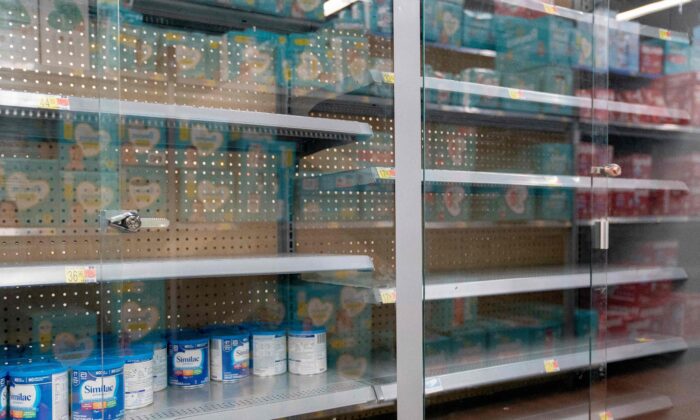 Grocery store shelves where baby formula is typically stocked are locked and nearly empty in Washington on May 11, 2022. (Stefani Reynolds/AFP via Getty Images)
Congress

U.S. lawmakers on May 13 announced a probe into the baby formula shortage hitting American consumers.

The House Oversight Committee is investigating what four top formula manufacturers are doing to address the shortage, which stems from the Biden administration forcing the closure of an Abbott Labs plant after an inspection found unsanitary conditions.

In letters sent to Abbott, Nestlé USA, Reckitt subsidiary Mead Johnson, and Perrigo, lawmakers noted that people in many states are experiencing shortages and called the dearth of baby formula “a threat to the health and economic security of infants and families in communities throughout the country.”

“It is critical that your company take all possible steps to increase the supply of formula and prevent price gouging,” Rep. Carolyn Maloney (D-N.Y.), chairwoman of the House panel, and Rep. Raja Krishnamoorthi (D-Ill.), chairman of the Subcommittee on Economic and Consumer Policy, wrote.

They asked for briefings on the matter as well as written responses to their questions, which included asking when the companies became aware of the shortages and what steps they’ve taken to increase supply.

The companies together produce about 90 percent of the formula sold in the United States.

A Perrigo spokesperson told The Epoch Times in an email that the company’s facilities are running 24 hours a day, seven days a week but are at full capacity.

Perrigo “is doing everything possible to provide as much infant formula to its retail partners during this challenging time,” the spokesperson said.

In the three months ending on March 31, Perrigo shipped 37 percent more formula than the same time period in 2021.

Nestlé is “a small player in the infant formula market,” a company spokesperson told The Epoch Times via email, adding that “we are absolutely committed to doing everything we can to help get parents and caregivers the formula they need so their babies can thrive.”

“We have significantly increased the amount of our infant formula available to consumers by ramping up production and accelerating general product availability to retailers and online, as well as in hospitals for those most vulnerable. We are also working through our Gerber Parent Resource Center, website, social media and industry groups to help make sure essential information is available for those parents and caregivers seeking it,” the spokesperson added.

Abbott did not respond to a request for comment.

The U.S. Food and Drug Administration (FDA) became aware of problems with Abbott’s plant in September 2021 but did not inspect the plant until Jan. 31 and did not force it to shut down until February, Rep. Rosa DeLauro (D-Conn.), who chairs the House Appropriations Committee, said in a recent report.

A whistleblower, a former worker at the plant, alerted regulators that records were falsified and formula that wasn’t tested was being released. Abbott has said the worker was fired due to violating food safety policies and that it was reviewing the complaint and investigating the allegations.

FDA Commissioner Robert Califf said this week that the agency is “doing everything in our power to ensure there is adequate product available where and when they need it.” That will include easing restrictions on imports, the White House said Thursday.

Abbott has said that it is ready to resume production at its Michigan plant but the administration has not indicated when it will allow the company to do so.

President Joe Biden spoke with the CEOs of Reckitt and Gerber as well as executives from Walmart and Target around the same time, asking what the administration can do to help boost production and get formula into stores faster.

“Yesterday we had a productive conversation with President Biden on ways we can work together to address the nation’s infant formula shortage. We are running our plants 24/7, which has enabled us to increase supply to parents and infants by more than 30%—feeding 200,000 more babies than was possible at the start of the shortage. Today, Reckitt, the maker of Enfamil, provides over half the infant formula in the United States. This is an urgent health issue for millions of Americans, and we will continue to partner with the Administration to identify additional ways to help ensure parents and infants have a steady supply of safe, high-quality formula,” a Reckitt spokesperson told The Epoch Times in an email.