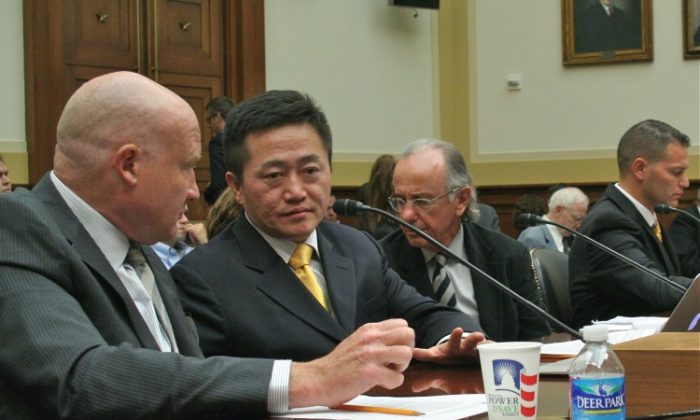 Witnesses testify at congressional hearing Sep. 12, on “Organ Harvesting of Religious and Political Dissidents by the Chinese Communist Party.” (L to R) Ethan Gutmann, author of "Losing the New China"; Charles Lee, M.D., Falun Gong practitioner imprisoned in China; Gabriel Danovitch, M.D., Medical Director, Kidney and Pancreas Transplant Program, at the David Geffen School of Medicine at UCLA; and Damon Noto, M.D., Doctors Against Forced Organ Harvesting. This hearing was referred to in the letter from Representatives Andrews and Smith asking for co-signers to the letter to Secretary of State Clinton. (Gary Feuerberg/The Epoch Times)
International

US House Members Seek Answers on Transplant Abuse in China

WASHINGTON—Approximately one-fourth of the membership of the U.S. House of Representatives has co-signed a letter asking the Secretary of State to “release any information” the department has “relating to transplant abuses in China.”

A “dear colleague” letter from Congressmen Robert E. Andrews (D-N.J.) and Christopher H. Smith (R-N.J.) asking their fellow House members to co-sign the letter to Clinton states that “serious allegations suggest unimaginable abuses have occurred” in the practice of organ transplantation in China.

Andrews and Smith refer to “testimony implicating Chinese hospitals and doctors in the practice of forced organ harvesting from prisoners, to allegedly include from living practitioners of the Falun Gong spiritual movement, Uyghurs, Tibetans and House Christians.”

The letter to Clinton asks in particular for the release of documents regarding organ harvesting that former Chongqing deputy mayor Wang Lijun may have transmitted during his stay in the U.S. Consulate in Chengdu, Sichuan Province, on Feb. 6.

“If such evidence was received and brought to light,” the letter states, “measures could be taken to help stop such abominable abuses.”

Out of a total House membership of 435, 106 representatives from 33 states signed the letter to Clinton, as of Oct. 3 when sponsorship closed.

On the next day at a rally in Fairfax, Va., President Barack Obama accepted a letter apprizing him of the contents of the House “Dear Colleague” letter, said Karen Gao, who delivered the letter on behalf of the Falun Dafa Association of Washington, D.C. It asks the president for his support in having the State Department release important documents, which, the association’s letter says, “may be instrumental in helping put an end to the atrocity that has been referred to as ‘a new form of evil on this planet.'”

According to the Congressional Research Office (CRS), “Dear Colleague” letters are official correspondence distributed in bulk to Members in both chambers.” They are primarily used by Members to persuade others to cosponsor or oppose a bill, but they can be used for other matters, as was the case here.

In 2006, The Epoch Times broke the story that China’s lucrative organ transplant industry was being supplied with the organs of Falun Gong practitioners—the largest group of prisoners of conscience in China today.

Since then, much analysis and investigation, corroborated by witness testimony, has led to the publication of two books that conclude that tens of thousands of Falun Gong practitioners have been killed for their organs: Bloody Harvest: Organ Harvesting of Falun Gong Practitioners in China, by David Kilgour and David Matas in 2009, and State Organs: Transplant Abuse in China, edited by David Matas and Torsten Trey, M.D., in 2012.

Bill Gertz reported in the Free Beacon Feb. 10 that two U.S. officials told him that Wang supplied the consulate with damaging information about Wang Lijun’s boss in Chongqing, Bo Xilai.

Chinese-language news websites based outside China, citing unnamed sources in the Chinese regime, have reported that the information Wang handed over in Chengdu included details about the atrocity of forced, live organ harvesting. The Epoch Times also had a source familiar with the matter who reported this.