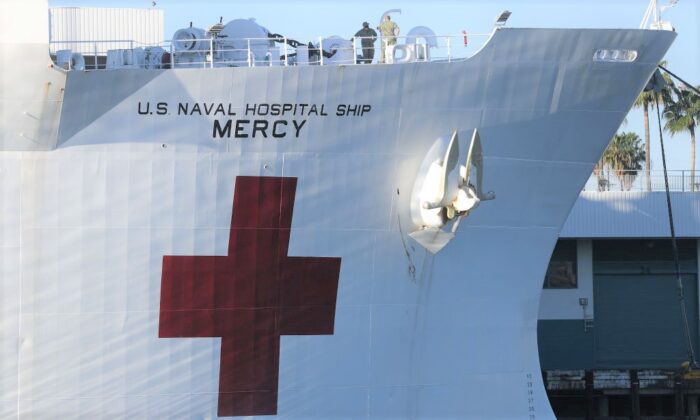 South Pacific expert Cleo Paskal has said the Solomon Islands Prime Minister Manasseh Sogavare is steadily moving all his chips into place before a sudden move to solidify his hold on power with the backing of Beijing.

Her comments come in response to the recent decision by the Solomons to allow U.S. Navy hospital ship, the Mercy, to visit the Pacific nation just days after a Coast Guard vessel was denied access.

Paskal, a senior fellow at the Foundation for Defense of Democracies, said the prime minister’s ultimate goal is to secure the support of the relevant number of MPs to pass an amendment to the Constitution that will delay next year’s slated national elections.

It was previously revealed that 39 of 50 MPs in the Solomons Parliament were recipients of money from a slush fund—the National Development Fund—backed by the Chinese Embassy. However, to keep those MPs placated, the prime minister had to allow the U.S. Mercy into Solomon waters to provide medical services for thousands of residents.

“The Mercy is very popular with the electorate. So for those number of MPs—who Sogavare needs to change the Constitution—if the Mercy had been blocked, it would have been bad for them electorally,” Paskal told The Epoch Times.

“He is supervising and preparing to trigger a situation where there’s civil dissent, either a false flag event or real demonstration against his attempted change to the Constitution,” she said, adding that Sogavare does not want “any foreign vessels floating around in his waters except maybe the Chinese.”

If civil dissent were to eventuate, it would give the prime minister an opportunity to trigger a recently signed security pact with Beijing to allow Chinese Communist Party troops, weapons, and naval ships to be stationed in the country.

Not only would it quash dissent against Sogavare, but it would give Beijing a military presence in the South Pacific close to Australia, New Zealand, and the U.S. territory of Guam.

Moving the Pieces into Place

In early August, the Sogavare government submitted a proposed amendment to delay the national election by six months with the prime minister saying the country did not have the resources to hold the vote and run the Pacific Games at the same time.

Opposition leader Matthew Wale responded saying, “So it’s happening” on Twitter, while calling on citizens to engage with the parliamentary process to air their criticisms of the Bill.

Meanwhile, on Aug. 30, Prime Minister Sogavare welcomed the arrival of the Mercy, one of two U.S. Navy hospital ships. This was despite an earlier incident on Aug. 23, when the U.S. Coast Guard vessel, the Oliver Henry, met with radio silence when the crew requested permission to dock for a routine port call.

Sogavare later claimed that by the time his office received notice of the Oliver Henry’s request, the ship had already left the Solomons. He further said his government was placing an embargo on naval visits from foreign countries—barring Australia and New Zealand—until they sorted out “new processes” for visiting ships.

Paskal said the overall situation in the South Pacific was “really, really bad” with democratic institutions under severe strain across the region.

The zone was slated as providing economic opportunities but was opposed by then-President Hilda Heine over money laundering concerns and because it could become a backdoor for Beijing to exert control over the country.

At the same time, Pacific neighbour Vanuatu has seen its Parliament dissolved by the government of pro-Beijing President Bob Loughman, while authorities in Kiribati are attempting to deport one of two High Court judges in its country.

“Where is the Pacific Islands Forum?” Paskal said. “And obviously, where’s Australia? This is completely off-the-charts behaviour.”