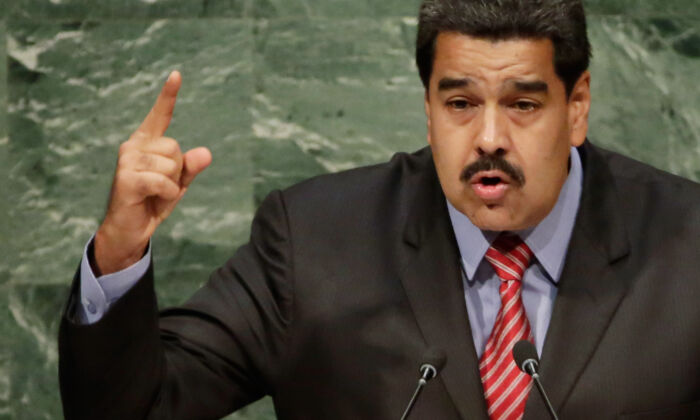 US Hopes to Secure Oil From Russia-Allied Venezuela

A high-powered delegation from the United States met with Venezuelan socialist President Nicolas Maduro and Vice President Delcy Rodriguez on March 5 to discuss the potential easing of sanctions and alternative oil resources.

The group of emissaries from the United States—led by top White House Latin America adviser Juan Gonzalez and ambassador James Story—also included six Citgo executives and special presidential envoy for hostage affairs, Roger Carstens, who attended to address the release of American citizens and dual nationals being held in Venezuela.

Tensions between the United States and the Maduro regime have been high since 2019 when Washington broke off relations and temporarily suspended the services of its embassy over the contested presidential election from the previous year, which Maduro was accused of stealing.

The Washington delegates arrived at a delicate time since U.S. lawmakers are pressuring the administration of President Joe Biden to restart the Keystone XL Pipeline project in an attempt to ease skyrocketing gas prices in the wake of Russia’s war in Ukraine.

On March 3, Maduro called Putin a “great leader of humanity” and verbally attacked Latin American media coverage of the Russia-Ukraine conflict, saying, “It’s really sickening and disgusting the way Spanish television and the press treat the conflict in Russia and Ukraine; folded, kneeling, dragged to the interests of the American empire.”

The controversial Venezuelan head of state pledged to sell Putin “everything he needs” to maintain the war in Ukraine and decried the sanctions against Russia, which has caused soaring petrol and gas prices worldwide.

Maduro also hosted a meeting with Russian officials the week before Putin launched a full-scale attack on Ukraine on Feb. 24.

During a tour with allied regimes in the region, which includes Venezuela, Cuba, and Nicaragua, the Russian Deputy Prime Minister Yury Borisov talked about deepening economic and military ties with Venezuela.

Borisov’s visit to Venezuela on Feb. 16 had a heavy focus on military objectives. Reinforcing this, Maduro said Russia and Venezuela were on the “path of powerful military cooperation” after the meeting.

Biden’s administration initially tried to avoid a boycott of the Russian energy sector to prevent higher prices at the pump for American consumers. On Feb. 24, the U.S. head of state said, “In our sanctions package, we specifically designed to allow energy payments to continue.”

According to U.S. Energy Information Administration data, the average monthly crude oil and gas imported from Russia in 2021 totaled roughly 680,000 barrels a day.

Meanwhile, prices in the United States are the highest since 2008.

In their joint statement, the senators said, “The United States cannot continue to rely so heavily on foreign oil when we have the resources to fuel our vehicles and heat our homes.”

Further, the memo added the Keystone project would transport a projected 830,000 barrels per day and nullify the country’s dependence on Russian oil.

The U.S. Department of State did not respond when contacted for comment.