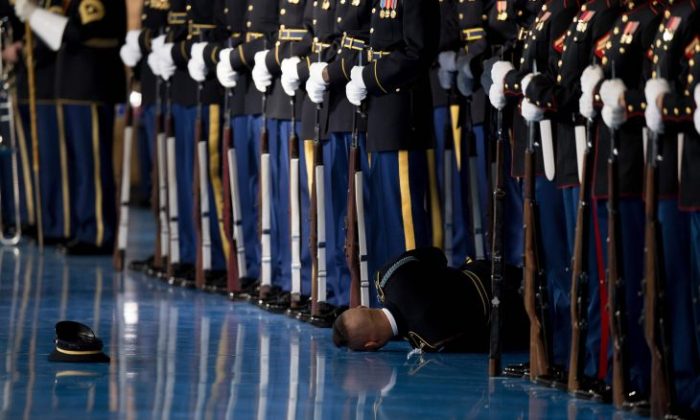 A member of the US Army Honor Guard lays on the floor after passing out during an Armed Forces Full Honor Farewell Review for US President Barack Obama at Joint Base Myer-Henderson in Arlington, Virginia, January 4, 2017. / AFP / JIM WATSON (Photo credit should read JIM WATSON/AFP/Getty Images)
US

A photo shows that a member of the U.S. Honor Guard passed out during President Barack Obama’s farewell speech to the armed forces on Wednesday.

The image, captured by an AFP photographer, shows the unnamed soldier face-down on the floor as other guards remain standing upright.

The soldier is believed to have fainted as Obama addressed the military at Joint Base Myer-Henderson Hall in Arlington, Virginia, for the final time before he departs the presidency.

His last day in office is Jan. 20, when Donald Trump’s Inauguration Day is slated.

It’s not uncommon for soldiers to pass out during ceremonies, as they often have to stand at attention for hours at a time.

Obama told the members of the military: “As I reflect on the challenges we have faced together and on those to come, I believe that one of the greatest tasks before our armed forces is to retain the high confidence that the American people rightly place in you.”

“We must never hesitate to act when necessary to defend our nation, but we must also never rush into war because sending you into harm’s way should be a last and not first resort.”

Obama also called on the military to aid in a smooth transition for Trump.

“We’ve got to make sure that during this transition period that there is a seamless passing of the baton, that there’s continuity,” he said.

It’s unclear why the soldier passed out, but some noted that the guardsman may have locked his knees while standing, which reduces the blood flow from one’s legs.