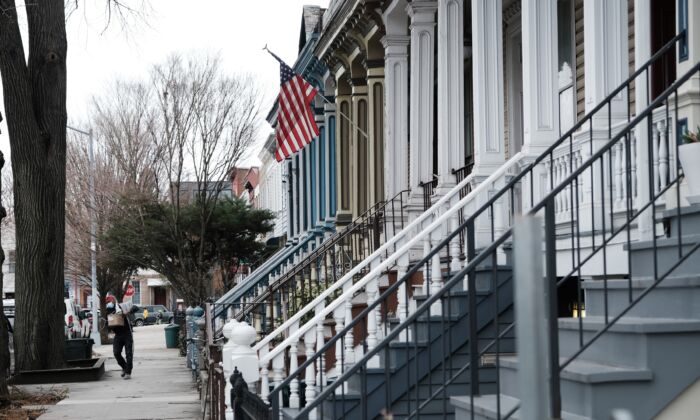 Homes stand in a Brooklyn neighborhood with a limited supply of single-family homes for sale in New York City on March 31, 2021. (Spencer Platt/Getty Images)
US Real Estate

U.S. home prices for the first quarter of 2022 continued to skyrocket with a record 20.9 percent year-over-year increase in March 2022, according to CoreLogic’s latest Home Price Index and Forecast, which was released on May 3.

This was the highest 12-month growth for the U.S. home index since the series began in 1976, while mortgage rates have risen to its fastest pace in 35 years.

A major housing boom has been taking place across the country over the past two years since the start of the pandemic, with most U.S. metropolitan areas showing robust home-price growth.

An increasing number of Americans are now working remotely from home, spurring demand for more housing.

A separate report from the National Association of Realtors (NAR) released the same day also confirmed a nationwide surge in home prices and mortgage rates, as many buyers rushed to lock in purchases in the first quarter before rates climbed even higher.

Homebuyers who closed on a property in March had a better chance of locking in mortgage rates around 4 percent or slightly lower compared to those in late April, when rates had moved up to more than 5 percent.

This was a jump of about 30 percent from the same time last year, which is making homeownership less affordable or viable.

The rising mortgage rates and home prices over the past few months are deterring many families from buying for now, prompting some to reduce their budgets or to drop out of the market.

“The annual growth in the U.S. index was the largest we have measured in the 45-year history of the CoreLogic Home Price Index,” said Frank Nothaft, chief economist at CoreLogic.

“Couple that price increase with the rapid rise in mortgage rates, and buyer affordability has fallen sharply.”

“In April, 30-year fixed mortgage rates averaged nearly 2 percentage points higher than one year earlier. With the growth in home prices, that means the monthly principal and interest payment to buy the median-priced home was up about 50 percent in April compared with last April,” concluded Nothaft.

According to the NAR, the median single-family existing-home sales price in the United States rose 15.7 percent in the first quarter from a year ago to $368,200.

The average monthly mortgage payment for a single-family home rose to $1,383, from $1,064 a year earlier in the first quarter.

The median sales price for single-family existing homes nationwide was higher in the first quarter compared with a year ago, in 181 of the 185 metro areas, in data from the NAR report.

Median prices rose by at least 10 percent from 12 months ago in 71 percent of the 185 metro areas, compared to the fourth quarter, when 67 percent of metro areas reported double-digit-percentage growth.

The average rate on a 30-year fixed-rate mortgage rose from 3.1 percent at the end of 2021 to 5.1 percent last week, one of the biggest increases in more than a decade, according to Freddie Mac.

Some economists are expecting rising mortgage rates to lead to slower home price growth by the end of 2022.

CoreLogic estimates that annual gains in home prices are projected to slow to around 6 percent by next March, despite the massive increases over the last year.

Since most homes typically go under contract a month or two before the contract closes, the first-quarter data is largely reflecting purchases made in late 2021 or at the beginning of the first quarter, leaving realtors hopeful.