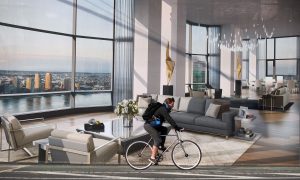 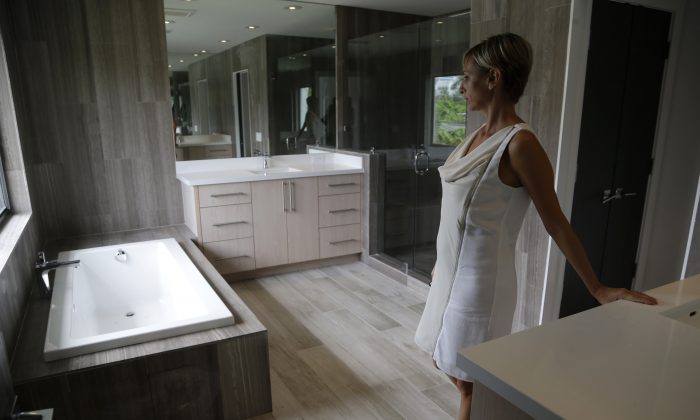 Mara Boccolini, a realtor associate with South Beach Estates, shows the master bathroom in a newly renovated waterfront property on the market during a viewing for brokers, in Miami Beach, Fla., on Sept. 24, 2014. Standard & Poor's releases its S&P/Case-Shiller index of home prices for September and the third quarter on Tuesday, Nov. 25, 2014. (AP Photo/Lynne Sladky)
Business

WASHINGTON—U.S. home prices rose in September at the slowest pace in more than two years, reflecting modest sales gains and a rising number of available homes.

The Standard & Poor’s/Case-Shiller 20-city home price index, released Tuesday, increased 4.9 percent in September from 12 months earlier. But that’s down from 5.6 percent in August and the smallest gain since October 2012.

On a monthly basis, the 20-city index was unchanged, the first flat reading in seven months. The monthly changes aren’t adjusted for seasonal factors such as colder weather, which can impact sales. Prices dropped in nine of 20 cities from August.

Home price gains have slowed this year after rapid, double-digit increases in the previous two years. Investors helped drive the strong gains by bidding up prices but have started to cut back on their purchases. Smaller price gains and low mortgage rates could make housing more affordable.

More Americans are also listing their homes for sale, helping keep prices in check. Nationwide, 2.22 million homes were on the market in October, up 5.2 percent from a year earlier.

After the roller-coaster of collapsing home prices during the housing bust, followed by big increases in 2012 and 2013, many economists have welcomed the modest gains this year.

“This slowdown is a critical step on the road back to a normal,” said Stan Humphries, chief economist at real estate data provider Zillow. “The market is becoming more balanced between buyers and sellers.”

The Case-Shiller index covers roughly half of U.S. homes. The index measures prices compared with those in January 2000 and creates a three-month moving average. The September figures are the latest available.

Eighteen of the 20 cities reported slower price increases over the past 12 months. Only Charlotte, North Carolina, and Dallas reported larger annual gains than in August.

Miami posted the strongest 12-month gain at 10.3 percent, followed by Las Vegas at 9.1 percent. September was the first time that Las Vegas reported a price increase below 10 percent in more than two years. Investors have bid up prices in that city, which saw a large housing bust and many home foreclosures.

Healthy sales in Miami likely contributed to the big price gain. Home sales jumped 21.2 percent in Miami last month, according to Redfin, a real estate brokerage, the strongest increase among the 39 markets it tracks.

The smallest price gains in the Case-Shiller report were in Cleveland, where they rose 0.8 percent in September from a year earlier, and Washington, D.C., where prices increased just 2.1 percent.

Mortgage rates have also slipped in recent weeks, providing another boost to potential homebuyers. The average rate on a 30-year fixed mortgage declined to 3.99 percent last week from 4.01 percent the previous week.

Rates have hovered around 4 percent for the past month, down about a half-point from the beginning of the year, even as the Federal Reserve has wound down a bond-buying stimulus campaign.

The Fed’s bond purchases were intended to keep interest rates low, leading many economists to forecast that mortgage rates would rise once the purchases ended. But so far, that hasn’t happened.

Nationwide, sales of existing homes rose in October to their fastest pace this year, evidence that the housing market is rebounding from a slowdown last spring.

Still, household incomes after adjusting for inflation have been flat for the past several years, making it harder for many Americans, particularly first-time buyers, to afford a home. Many younger Americans are also saddled with student loan debt and are renting rather than buying. Last month, first-time buyers made up just 29 percent of home sales, below the 40 percent they have historically represented.