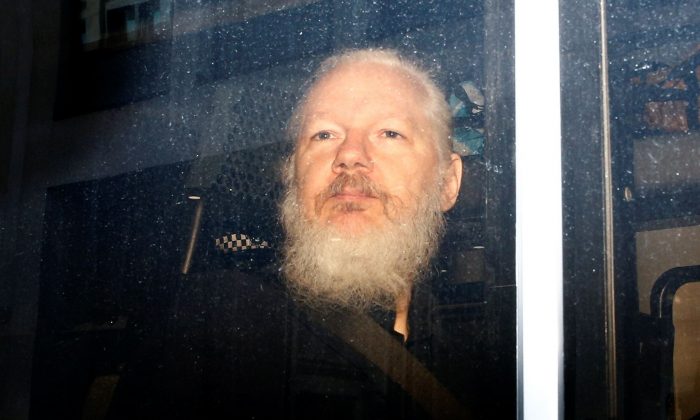 WikiLeaks founder Julian Assange is seen in a police van, after he was arrested by British police, in London on April 11, 2019. (Henry Nicholls/Reuters)
US News

The Justice Department leveled an 18-count superseding indictment against WikiLeaks founder Julian Assange on May 23.

The new charges include conspiring with former Army intelligence officer Chelsea Manning to obtain classified materials, compromising sources in the Middle East and China, and conspiracy to hack into a more secure military database.

Assange started publishing the files via Wikileaks in 2010, which resulted in Manning being court-martialed and jailed.

Assange isn’t being charged for being a publisher, or for passively obtaining or receiving classified information, said Zachary Terwilliger, U.S. Attorney for the Eastern District of Virginia.

Terwilliger said the sources were in China, Iran, Syria, Afghanistan, and Iraq.

“The indictment alleges that Assange knew that his publication of these sources endangered them,” he said.

John Demers, assistant attorney general for national security, said some of the documents published on WikiLeaks had been found in Osama Bin Laden’s compound.

The WikiLeaks leaks were one of the largest compromises of classified information in the history of the United States.

Each charge, except the hacking charge, carries a 10-year maximum sentence.

Assange was arrested in London on April 11 after spending seven years living in the Ecuador Embassy.