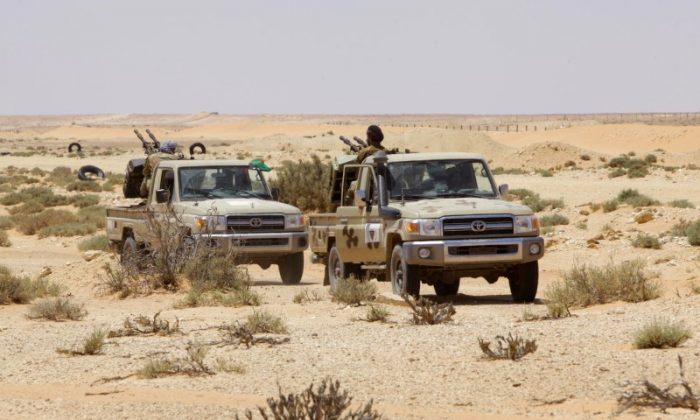 US Hits ISIS Camps In Libya With Precision Airstrikes, Killing 17

The strikes, which were not announced until Monday, were the first the United States had carried out in the North African country since Donald Trump assumed the presidency.

The U.S. African Command said the strikes were carried out in coordination with Libya’s Government of National Accord (GNA), Libya’s U.N.-backed interim government.

The camp was located approximately 150 miles southeast of Sirte, not far from the two camps U.S. forces bombed the day before Trump assumed office on Jan. 19.  Those attacks came after GNA-aligned forces dislodged ISIS fighters from the city of Sirte the year before.

Those attacks claimed the lives of 80 ISIS militants, some of who were actively plotting attacks in Europe and America, outgoing U.S. defense secretary, Ashton Carter, told reporters at the time.

The camp hit in these latest airstrikes was also used to plot and conduct attacks, according to the U.S. African Command. It was also used to move fighters in and out of Libya and stockpile weapons.

ISIS has used the chaos and political instability in Libya to carve out safe havens, one of the few places in North Africa and the Middle East where the terrorist group isn’t being routed by U.S.-backed domestic forces.

“ISIS and al-Qaeda have taken advantage of ungoverned spaces in Libya to establish sanctuaries for plotting, inspiring and directing terror attacks; recruiting and facilitating the movement of foreign terrorist fighters; and raising and moving funds to support their operations,” said U.S. African Command.

“These terrorists have sought safe haven and freedom of movement in Libya to launch external terror attacks in neighboring countries, and their operatives in Libya have also been connected to multiple attacks across Europe.”

Those attacks included the Manchester Arena bombing in May, which was carried out by a British-born man of Libyan descent in close contact with family in Libya who have proven links to ISIS.

According to the military statement, if the ISIS camps in Libya were left unaddressed, they would allow the terror group to inspire attacks against the United States, its allies, and interests around the world.

“The United States will track and hunt these terrorists, degrade their capabilities and disrupt their planning and operations by all appropriate, lawful, and proportional means,” says the statement.

The military says its allies in Libya have been stalwart opponents of the terror group.

A recent tweet from AFRICOM says that the focus of U.S. forces in Libya is to support the GNA in its fight against ISIS.